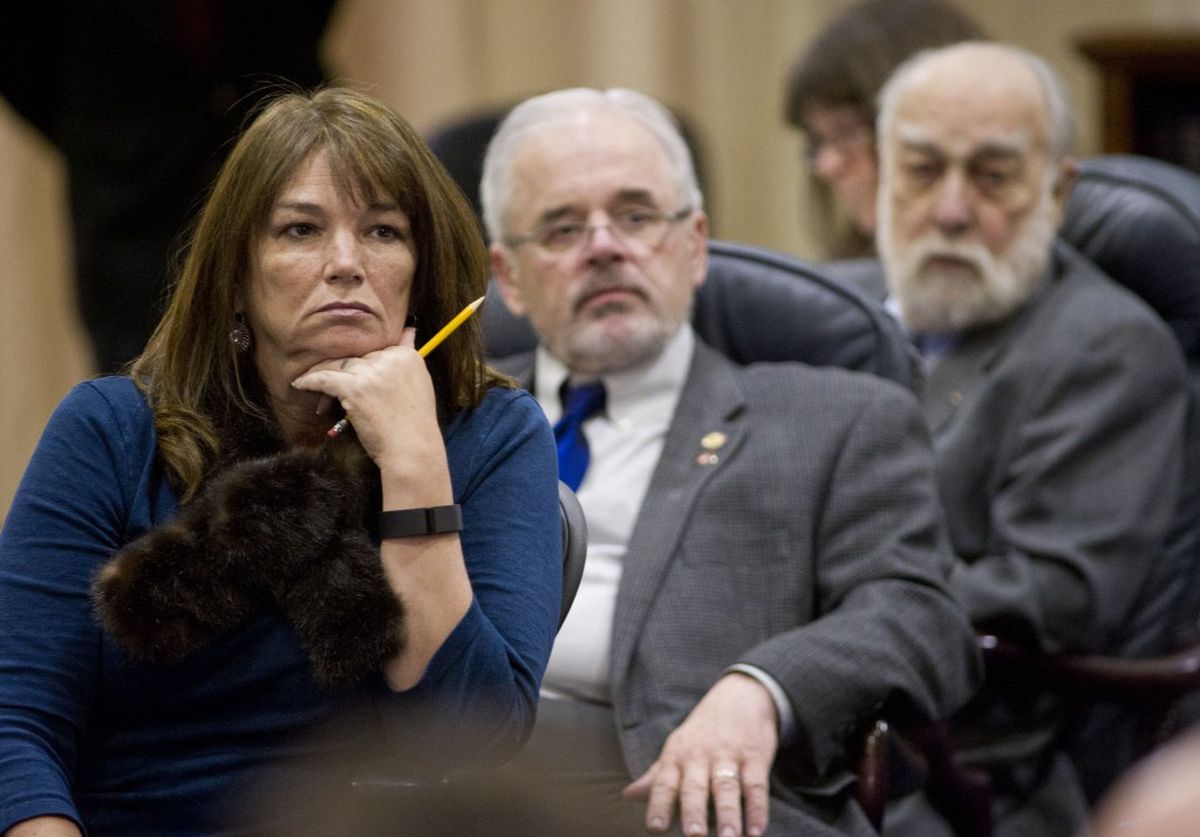 JUNEAU — The House Finance Committee on Friday narrowly rejected Gov. Bill Walker's legislation to reduce the Alaska budget deficit by restructuring the Permanent Fund, refusing to allow a vote on the floor.

One of the bill's Republican opponents, Anchorage Rep. Lance Pruitt, acknowledged that the changes proposed by the bill seemed inevitable. But he said he was unwilling to vote for it because his constituents don't see things the same way.

"I get it. We're not going to have the ability to pay for our budget fully in the next few years without having a discussion about the earnings reserve," Pruitt said, referring to the Permanent Fund account from which Alaskans' dividends are paid. But in an emphatic, angry rejection of the legislation, he added: "We still have not, I don't think, done the work in making sure that constituents out there are on board with walking in lockstep with us in trying to fix this thing going forward."

The no votes were Democrats David Guttenberg and Scott Kawasaki of Fairbanks, and Republicans Pruitt, Tammie Wilson of North Pole, Lynn Gattis of Wasilla, Dan Saddler of Eagle River.

Voting yes were Democrats Les Gara of Anchorage and Bryce Edgmon of Dillingham, and Republicans Steve Thompson of Fairbanks, Cathy Munoz of Juneau, and Mark Neuman of Big Lake. Neuman said he only wanted to advance the bill to the floor, where he would have voted against it.

The committee's rejection of SB 128 was a big blow to Walker's effort to get the Legislature to adopt comprehensive financial reforms — an effort that began in January with a wish list of a dozen different bills to both raise new revenue and cut spending.

After nearly five months in Juneau in a regular and special session, lawmakers have approved a reduced state budget, and a version of Walker's oil tax legislation. But with one exception — a bill to set up a state-backed loan program for oil and gas infrastructure that the House passed Friday — House lawmakers have blocked votes on any of the other bills, which include a new personal income tax and increased taxes on tobacco, alcohol and natural resource extraction.

The Senate has refused to advance any of the tax measures past its finance committee, but it passed the Permanent Fund legislation 14-5 last week, saying that the bill was needed to save Alaskans' dividends in the future. Since that vote, Walker's wish list seems to have narrowed to SB 128 alone, with just four days remaining in the special session he convened.

Walker has said he'll likely call lawmakers into a second special session if the House fails to approve the Permanent Fund bill. And the House Finance Committee has the option to rescind its Friday vote, said Thompson, the committee's co-chair, adding that it "remains to be seen" if SB 128 is dead.

But House Speaker Mike Chenault, R-Nikiski, said it's unlikely that his chamber will make much more progress, now that lawmakers have been in Juneau for two extra months and "tried many different configurations."

"We still haven't been able to figure out a way to move forward. I don't know what another month will do," Chenault said in an interview. He added: "I'm ready to go home."

Walker, who earlier this week held a news conference to urge the House to pass the Permanent Fund bill, was conspicuously silent Friday, with his communications director, Grace Jang, releasing a brief statement at the end of the day.

"Governor Walker continues to work with legislative leadership to find a way to get SB 128 passed," Jang said.

One of the advocates behind the lobbying and public education campaign in support of restructuring the Permanent Fund, Ben Sparks, said it's "unfortunate that a few legislators chose to put politics ahead of doing what's best for Alaska."

Sparks is the executive director of Alaska's Future, a group spearheaded by Ron Duncan, president of the telecommunications company GCI, and backed by businesses and labor groups like Alaska Airlines, the Alaska AFL-CIO, and Trident Seafoods.

"Fortunately, we all know this is far from over, and we can expect the Legislature to be back very soon dealing with this measure again," Sparks said in a phone interview Friday.

He added that there's been growing public acceptance of using the Permanent Fund to help pay for government.

"This used to be considered the third rail of Alaska politics and now it's being uttered from the lips of every editorial page, every major business in the state," Sparks said. "We've come a long way, and we'll continue pushing."

The Senate's version of the bill would set dividends at $1,000 this year and the next two years.

Both bills would use Permanent Fund earnings to help pay for state government, shifting Alaska's budget away from its dependence on oil revenue.

Oil prices have crashed in the last two years and forced withdrawals of billions of dollars from the state's savings accounts, leaving only about two more years of money in the primary rainy day fund, the Constitutional Budget Reserve.

When that account is empty, Walker says lawmakers will be forced to cover the state's $3.2 billion deficit with money from the Permanent Fund's earnings reserve, which pays Alaskans' dividends.

Unless the House Finance Committee reverses itself, it appears increasingly likely that the Legislature will finish the special session — set to end Tuesday — without further reducing the deficit.

And even if advocates find a way to get SB 128 out of the finance committee, it still faces an obstacle in Anchorage Republican Rep. Craig Johnson, the rules committee chairman, who said in an interview Friday that he would block the legislation from going to the floor unless Walker's administration could show it has the 21 votes needed to pass.

If the bill dies and dividends remain at their recent highs, that could be seen as good for the state's economy in the short run, said Gunnar Knapp, a University of Alaska Anchorage economist who's analyzed the budget deficit and the impacts of different ways to fix it.

But if lawmakers fail to realign state revenue and spending, he said, "there is this very real but hard-to-measure effect of what it does to confidence and investment and our workforce by having this situation unresolved."

"If you're a fisherman or you're an oil company, you don't know how the state's going to fix this thing. You do know, however, that you're potentially in the crosshairs," he said. "Uncertainty is a major drag on the economy."

Correction: An earlier version of this story said the House has blocked votes on all the pieces in Gov. Bill Walker's deficit reduction package with the exception of the state budget and oil tax legislation. In fact, House lawmakers on Friday approved one of those pieces — a bill to set up a state-backed loan program for oil and gas infrastructure.