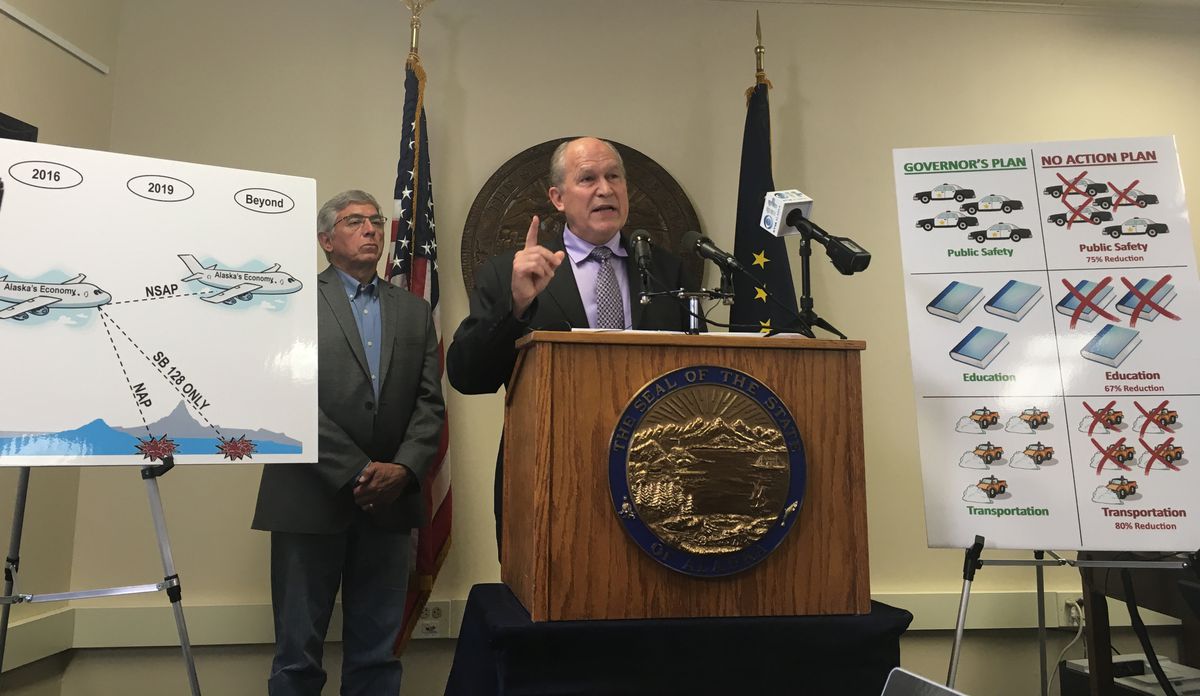 JUNEAU — Alaska's two legislative branches and Gov. Bill Walker continued on divergent paths Thursday, with Walker saying for the first time that it will likely take the fall election to dislodge his budget reforms from a gridlocked Legislature.

The Legislature's current special session, convened Monday under an order by Walker, remained stalled, with the House canceling its only Thursday hearing and leaning toward adjournment Friday.

The Senate, for its part, rejected the House's request to hold votes on overriding Walker's budget vetoes — including his halving of Permanent Fund dividends — but signaled no intention of canceling a set of Senate hearings on Walker's proposed tax measures that it scheduled for next week.

Walker, meanwhile, held a news conference to warn of the dire consequences of lawmakers' inaction, and suggested he would campaign on behalf of challengers willing to "make tough decisions." But he also acknowledged that his proposals to fix the state's $3.2 billion budget gap appear dead for this special session, and likely until November.

"I don't believe in doing the same thing over and over without any changes and expecting a different result," Walker said.

"If someone comes to me and says, 'Hey, we want to come back and resolve this' — man, I would call a special session in a minute," Walker added. "Barring that, I think we need to wait until after the election."

Walker, an independent, spoke from his Juneau office on the fourth day of the special session, flanked by new posters illustrating the draconian cuts that he says he'll be forced to impose on state government without budget reforms.

His 35-minute news conference sounded at times like a campaign concession speech, as he thanked state employees, "everyday Alaskans" and municipal officials for their cooperation and support as he's pressed for deficit-reduction measures.

But Walker and Democratic Lt. Gov. Byron Mallott also made one last plea for action from lawmakers, with Mallott saying a decision by the Legislature to postpone budget reforms would be like "holding Alaska's future hostage."

A visibly frustrated Walker recounted a series of historic Alaska disasters, from the 1964 earthquake to the 1989 grounding of the Exxon Valdez, saying that preceding governors would have done everything to stop those catastrophes if they'd known they were coming.

The complaints referenced a Wednesday press release from Walker's office that said he would ask all legislators and every legislative candidate to say whether they support Walker's spectrum of budget reforms, or a scaled-down version that would only change the administration of the $54 billion Permanent Fund, or a "NAP" — a No Action Plan.

The state ethics officer, Jon Woodman, a senior assistant attorney general, said in a phone interview Thursday that he'd determined Walker's statement hadn't violated ethics law. But any formal rulings on ethics complaints against the governor must be made by an independent attorney hired by the state personnel board, he said.

Wilson's ethics complaint has been one of the only formal actions to emerge this week from the House, which has proven incapable of holding a single hearing on the tax and Permanent Fund legislation that Walker introduced for the special session.

House Speaker Mike Chenault, R-Nikiski, said Thursday that his chamber is considering whether to adjourn the special session in a floor session scheduled for Friday morning, or stay in Juneau and see if members can reach consensus on any of the individual pieces of Walker's deficit reduction plan.

But another House leader, Rep. Mark Neuman, R-Big Lake, suggested that he was ready to end the special session.

While House members were awaiting their Friday floor session — their first since Monday — their bid to take override votes on Walker's $1.3 billion in budget vetoes was rejected by Senate President Kevin Meyer, R-Anchorage.

In a prepared statement, Meyer said there didn't appear to be the necessary support for any overrides, which require a three-fourths vote at a joint meeting of the Legislature.

On the most high-profile issue — Walker's decision to reduce dividends from $2,000 to $1,000 to preserve the state's rapidly dwindling savings — the Senate had already voted 14-5 for Walker's legislation to restructure the Permanent Fund, which would have the same effect on dividends.

That legislation, had it not been rejected by the House Finance Committee, would have diverted some of the fund's earnings to state government, and was the largest piece of Walker's plan to reduce the deficit.

"There was never much of an interest to do a veto override from myself and from many of my colleagues," Sen. Bert Stedman, R-Sitka, said in a phone interview. "The concern is the cash burn rate that we're under and the financial position we're going to be in in less than a year."

As long as each of the 14 senators who voted for the Permanent Fund legislation backed Walker's dividend veto, all but one of the other 46 lawmakers would have had to vote for an override to make the effort successful.

"Unless you can actually override the governor, it's an exercise that's just enough to put people on edge," said Coghill, who didn't respond to a phone message Thursday. "That's all. That's the only value I see."

Asked if those 14 senators were fearful of taking another Permanent Fund vote, Stedman responded, "Historically, the senators have taken positions and they don't change much after they take them."

"It wasn't a fun vote to make, and I didn't like the position to have to do that," Stedman added. "But the alternative is worse."

While the House appeared to be moving toward adjournment, the Senate scheduled a "technical session" for Friday. That means senators will meet to keep the current special session alive but won't expect to have the 11 members needed for a formal vote on adjournment — or anything else.

The Senate Labor and Commerce Committee has planned daily meetings on Walker's tax proposals in Anchorage next week, and Meyer, in a prepared statement, gave no indication that they would be canceled.

"We intend to give the governor's revenue measures a fair hearing and have scheduled committee meetings in Southcentral Alaska," said Meyer.

Meyer didn't respond to an interview request but Chenault said he was told the Senate is planning to hold another floor session Monday. If the House adjourns but the Senate doesn't call it quits by Monday, the House would be forced to return to Juneau under the Alaska Constitution, which says neither chamber can adjourn for longer than three days without the other's agreement.

"That possibility is there," Chenault said.

But Chenault said he didn't know what action the House would be capable of taking, even if the special session continued.

"Everybody's just frustrated," he said. He added: "I'm just trying to figure out, how do we move forward? This is like a gerbil cage, and you're just running in a circle."