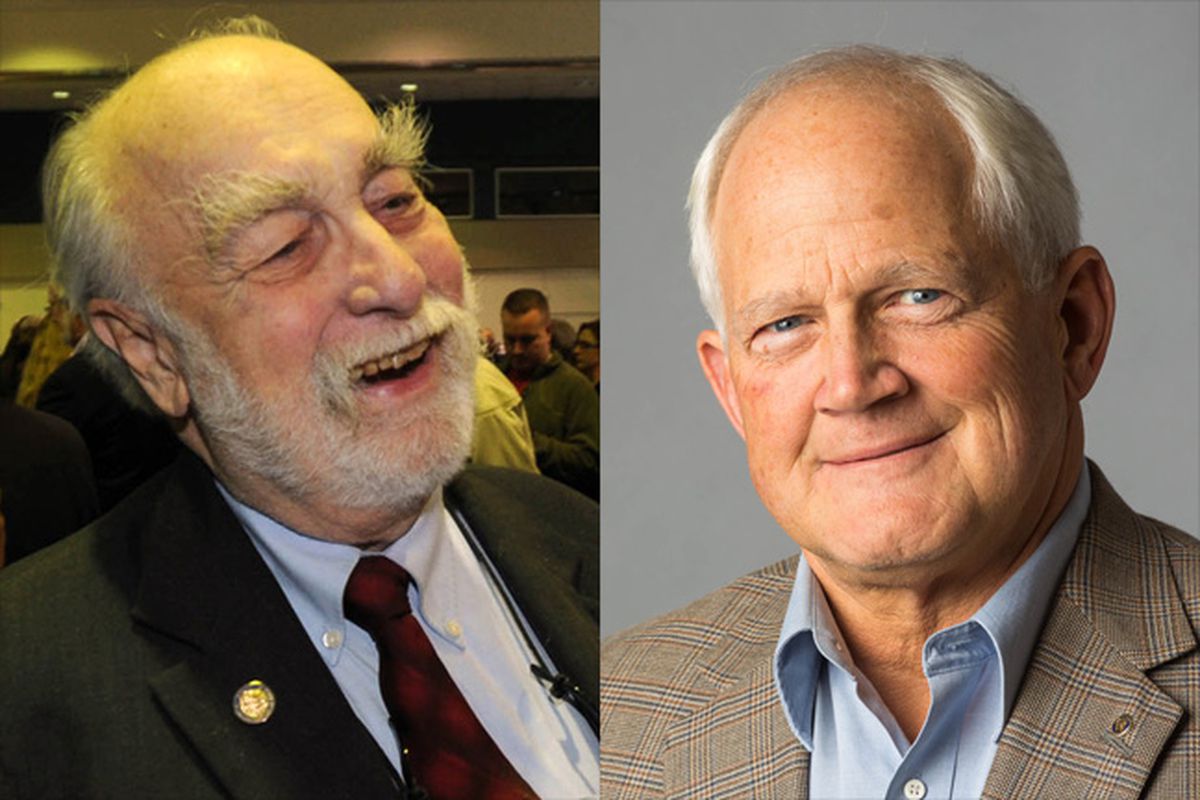 Bob Lynn, left and Chris Birch, right, are running for a seat in the Alaska House in the fall of 2016.

Bob Lynn, left and Chris Birch, right, are running for a seat in the Alaska House in the fall of 2016.

Chris Birch was barred by term limits from running for his Anchorage Assembly seat from South Anchorage after nine years in office. So it might seem strange that he's running as the fresh face in his Republican primary campaign for a place in the Alaska House next year.

But the label makes sense considering who Birch is trying to unseat.

The South Anchorage primary pits 65-year-old Birch against 83-year-old Rep. Bob Lynn, a seven-term incumbent who jokes that he worked the Cain and Abel murder case as an Arizona cop.

Lynn, whose wife of 64 years died last month, says he deserves another term. But Birch says it's time for a change, and urges voters to pick him as the Republican candidate to run against Democrat Bill Goodell.

"I think we need new energy, new enthusiasm, new ideas in dealing with the issues we face," Birch said. "Bob just needs to — he needs to retire. He needs to take a break."

Lynn says he's never heard any complaints about his performance from Birch. And in fact, on the biggest issue facing lawmakers — whether to support restructuring the Permanent Fund to help close the state's budget gap — the two candidates don't appear to be significantly different.

Lynn recently sent a mailer that says one of the things at stake in this year's election is "keeping the governor's 'pea-picking hands' off your PFD, and no income tax," using a derogatory phrase from the Dust Bowl era describing poor white farmworkers.

Birch won't support new taxes or a change to the Permanent Fund, either.

"The public won't accept any sort of budget-balancing measures other than cutting at this point," he said.

The two men do have different backgrounds and approaches to the race.

Birch is a retired engineer who's worked for mines and the company that operates the trans-Alaska oil pipeline, the Alyeska Pipeline Service Co. He's running an aggressive campaign that's raised more than $55,000, with contributions from developers, oil company contractors and prominent Republican donors.

He quickly ticks through his accomplishments on the Assembly, as well as areas of state government he'd cut: He favors privatization of public services and thinks Alaska might be able to do without its commerce department, as well as some of its school superintendents.

"I've made my mark and I'm proud of the work I've done with the city," Birch said. "If you want a change, I'm willing to step up and do what it takes."

Lynn boasts conservative credentials of his own — he's sponsored measures requiring voters to show photo ID, which have drawn criticism from Democrats who said the legislation discriminates against Alaska Natives and Hispanics. Courts have declared similar measures in Texas, North Carolina and Wisconsin to be unconstitutional barriers to voting. But he's less polished than Birch, and his campaign has raised just $25,000, with little support from businesses or Republican Party insiders. Critics point out that he's sometimes spotted dozing at committee hearings.

Lynn bats away skeptics with a still-sharp sense of humor. While he uses a cane for balance, he insists that he's in "pretty damn good health, actually," conceding: "I don't climb Flattop that much." He also doesn't deny taking the occasional, unintentional nap.

One area where there's a sharp contrast between the two candidates is their affinity with public sector unions.

Lynn, a former public school teacher, is a supporter of organized labor. Of the $25,000 Lynn has raised for his re-election campaign, $21,000 comes from union or labor groups' political action committees, or from labor officials.

Some of those same unions have launched a separate, $29,000 media campaign on Lynn's behalf. The effort is distinct from Lynn's own re-election effort and has been mounted under state campaign finance laws that allow unlimited fundraising and spending as long as it's not coordinated with candidates — the same way that federal law allows unlimited corporate and union spending on super PACs.

A union website funded primarily by the Alaska AFL-CIO, the state's largest labor group, describes Lynn as "our champion in the Legislature," and an "Alaskan hero" who has "vocally supported practical solutions to our budgetary issues."

"In the midst of our current fiscal crisis we need proven leaders at the helm of Alaska's Legislature. Bob Lynn is one of those leaders," the site says. "He is staunchly against any tax or regulation that will impede Alaskan businesses."

That message seems to belie the AFL-CIO's membership in Alaska's Future — a campaign by businesses and labor groups that's trying to convince lawmakers of the necessity of restructuring the Permanent Fund.

Lynn said he would have opposed Senate Bill 128, the Permanent Fund restructuring bill that passed the Senate before dying in the House Finance Committee.

But he still deserves support from organized labor, especially when his opponent is Birch, said Vince Beltrami, the AFL-CIO president, who was also one of Alaska's Future's co-chairs until he announced earlier this year that he was running for state Senate himself.

Beltrami couldn't immediately point to a vote where Lynn had broken with his Republican-led caucus and sided with organized labor. But Birch, as an Anchorage Assembly member, voted for a 2013 city ordinance that rewrote municipal labor rules and sharply reduced public sector unions' power.

Birch also infuriated supporters of a repeal effort by copying their design for campaign signs.

"We're going to stick with the guy that's been tried and tested on issues that are important to working families," Beltrami said, referring to Lynn. "Even if those are not the issues of the day."

Lynn said the support from unions gets them a "thank you and a smile" and no more. And he said he likely would have voted for a proposed bill to freeze state workers' pay, had it advanced to the House floor this year.

But Birch accuses Lynn of failing to put enough downward pressure on the state budget because of an alliance with organized labor groups that have a "strong resistance" to spending cuts. With all the union support for his campaign, it seems like Lynn "might have a hard time having an independent perspective," Birch said.

The two candidates' different postures toward organized labor may help some Republicans make up their minds in the Aug. 16 primary.

But at least one potential voter said he was frustrated by the fact that neither candidate is endorsing a restructuring of the Permanent Fund — the linchpin of the deficit-reduction package proposed by Gov. Bill Walker this year.

"I don't have much of a choice here," said Mike Stinebaugh, 65, a lifelong Republican who owns a heating and ventilation company and emailed lawmakers earlier this year to push them to pass Senate Bill 128.

Stinebaugh's message, he said, "seemed to fall on deaf ears."

Financial experts and the Legislature's own chief budget analyst have pointed out that cuts alone will be insufficient to close the state's $3.2 billion budget deficit — even firing every single state employee would still leave a gap.

"It's ridiculous that Chris Birch and Bob Lynn go on and on with all these current legislators that are willing to do what needs to be done. We can't cut and get there," Stinebaugh said. "It's almost enough to inspire me to get into politics — but I'm not going to give up my life to that."