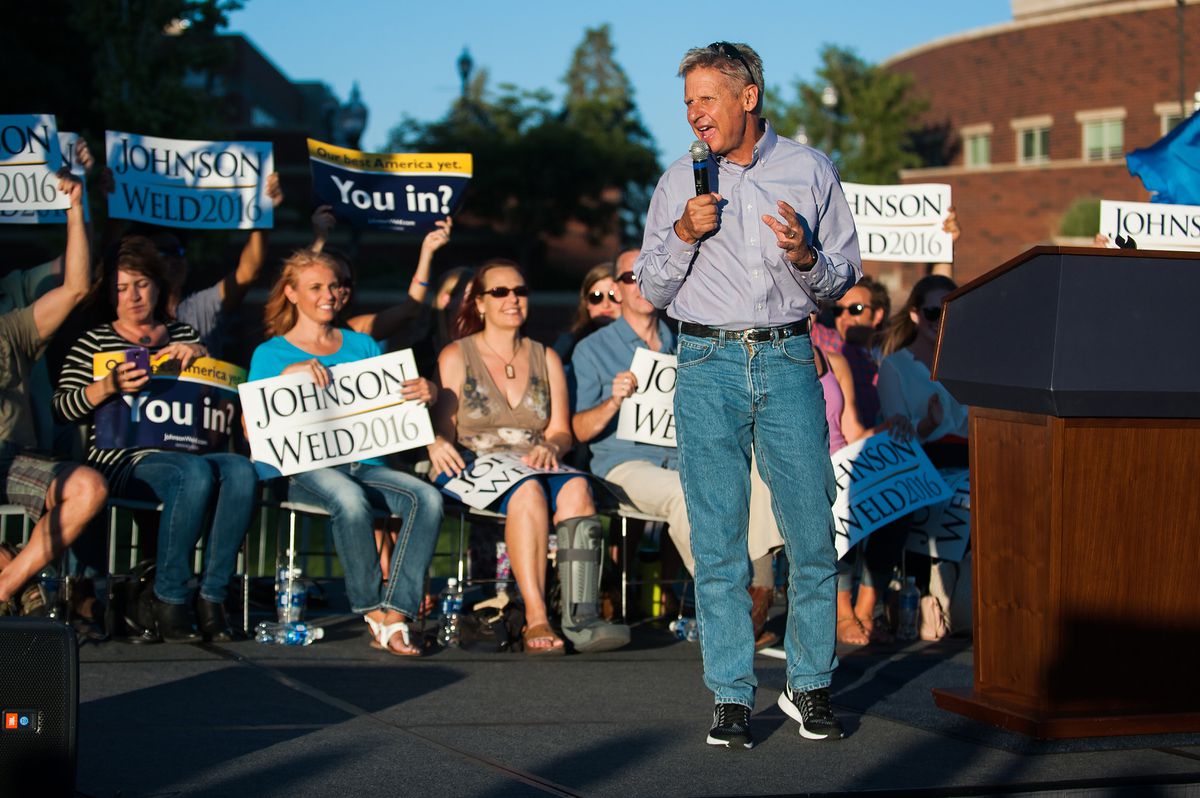 Libertarian presidential candidate Gary Johnson believes Alaskans will want him — if they simply get to know him.

"Given just how polarizing Clinton and Trump are … I think we occupy a big six-lane down the highway that 60 percent of Americans occupy and I'm willing to bet 60 percent of Alaskans occupy," Johnson said by phone on Friday.

During a campaign swing through the Rocky Mountains, Johnson spoke with the Juneau Empire's editorial board for 30 minutes, offering his stance on Alaska issues in a pitch to voters who already appear open to his ideas.

In June, Alaska Dispatch News commissioned a poll from Alaska Survey and Research, a firm operated by Ivan Moore of Anchorage.

The results of that poll were never published by ADN. In a four-way race among Republican Donald Trump, Democrat Hillary Clinton, Johnson and Green Party candidate Jill Stein, Moore found 39.4 percent of registered Alaska voters supporting Donald Trump. For Clinton, the support was 30.4 percent. Johnson was a strong third at 15.6 percent.

(Editor's Note: The Moore poll for ADN, of 670 registered voters in Alaska between June 16 and June 20, asked respondents' preference for president in two ways. The first question had three choices: Trump had support of 45 percent, Clinton 41 percent and undecided 14 percent. The second question, which included other candidates, showed Trump at 39 percent, Clinton at 30 percent, Johnson at 16 percent and Stein at 6 percent, with 9 percent undecided.)

"I was surprised Johnson was as high as he was," Moore said by phone. "At the time we did the survey, I think Johnson's national polling average in a four-way (race) was about 7 percent."

Nevertheless, Alaska's Libertarians have enjoyed strong support from the state's stock of independent and nonpartisan voters.

Of the state's 516,000 registered voters, 53 percent are not tied to a specific political party, and the state's reputation for independent thought and action seems to align with the Libertarians' belief in small government and social freedom.

"It's kind of the Last Frontier, the pioneer spirit, with the stress on liberty … that's real close to Libertarianism," explained pollster Mark Hellenthal of Anchorage.

Johnson himself said his desire is to see a "fiscally conservative, socially inclusive" government that disdains foreign military intervention.

"When we intervene and try to … get on the side of regime change," he said, "in my lifetime, I can't think of a single example where that's worked out."

Asked about some of Alaska's biggest persistent issues with the federal government, Johnson varied between straightforward answers and plain acknowledgement that as president, he'd have to learn more.

With regard to oil drilling on federal land in the North Slope and offshore in federal waters, he said he'd attempt to seek compromise but tend to side with Alaskans.

"Who best determines, who best understands Alaska other than you living in Alaska?" he asked rhetorically. "I don't want to say any categorical yes or no, because I'm not as familiar with these issues."

Johnson served as governor of New Mexico between 1995 and 2003, when he was forced out of office by term limits. During that time, he frequently addressed land-use conflicts between the federal government and both state and private interests.

"We want to preserve this land, but yes, there seems to be some real, practical situations where there is mutual benefit to both sides," he said.

Based on his experience, "on a lot of these (land use) issues, if you manage to (anger) … both sides, you're doing something right."

In a late-July interview with the Los Angeles Times editorial board, Johnson said he doesn't support turning over Forest Service or wilderness lands to states, "but the BLM (Bureau of Land Management), that's a whole other topic."

"Wouldn't it make a lot more sense, when it comes to BLM land, to sell those lands and make them part of the property tax roll?" he told the Empire.

Johnson has been to Alaska several times, including a trip where he summitted Denali. (He's reached the top of the highest mountain on each continent and is an Ironman triathlete.) He campaigned in Anchorage during his 2012 run for president, holding a rally on the Delaney Park Strip.

"I envy all of you," he said. "I think it's the most beautiful state in the country."

Climate change and a warming world might threaten that.

That would include a fee — not a tax, he said — placed on carbon. Such a fee would make pollutants bear a market cost.

"We as human beings want to see carbon emissions reduced significantly," but at the same time, he says, the United States is only "16 percent of the (global) load" of carbon, and "I don't want to do anything that harms jobs."

"The rest of the world has to catch up with us," he said.

As with climate change, Johnson believes in a market-based, competition-minded approach to rising health care costs. Alaska now has the highest medical costs in the United States but Johnson said he believes that can be addressed through "a genuine free-market approach," something that would lower barriers for clinics and agencies to sell medical care at something approaching its true cost.

"We are looking to be elected president and vice president, not king or dictator," Johnson said of his role and that of his running mate, former Massachusetts governor William "Bill" Weld.

If Congress can come up with a better fix for health care, "We're going to sign on to anything coming out of Congress that makes better health," Johnson said.

On matters other than health care, Johnson believes that he and Weld — two former Republican governors from Democrat-leaning states — are better positioned to negotiate compromises between Democrats and Republicans.

"If Trump or Clinton is elected, nothing is going to come together in the middle," Johnson said.

In Alaska, the polling seems to agree.

"Like anywhere else in the country … the reason Johnson does as well as he does is because so many people dislike both Trump and Clinton," Moore said.

In his June poll, Moore found that just under 29 percent of Alaskans dislike both the Republican and Democratic candidates.

There's a limit on that kind of support, however. In order for Gary Johnson to gain ground in the polls, Alaskans need to be convinced to vote for him, not just against the candidate they dislike least.

Johnson believes he has that reasonable shot.

"Bill Weld and myself would not be doing this ourselves if we didn't think we couldn't win this thing outright," he said.

If that happens, Johnson said, he's willing to follow through on a pledge: He'll visit Alaska in his first term.

"I will make that pledge," he said with a laugh. "I would want to come up there in the winter and ski Talkeetna."