After upset victory in Senate primary, Wasilla councilman still needs to win over some Mat-Su Republicans 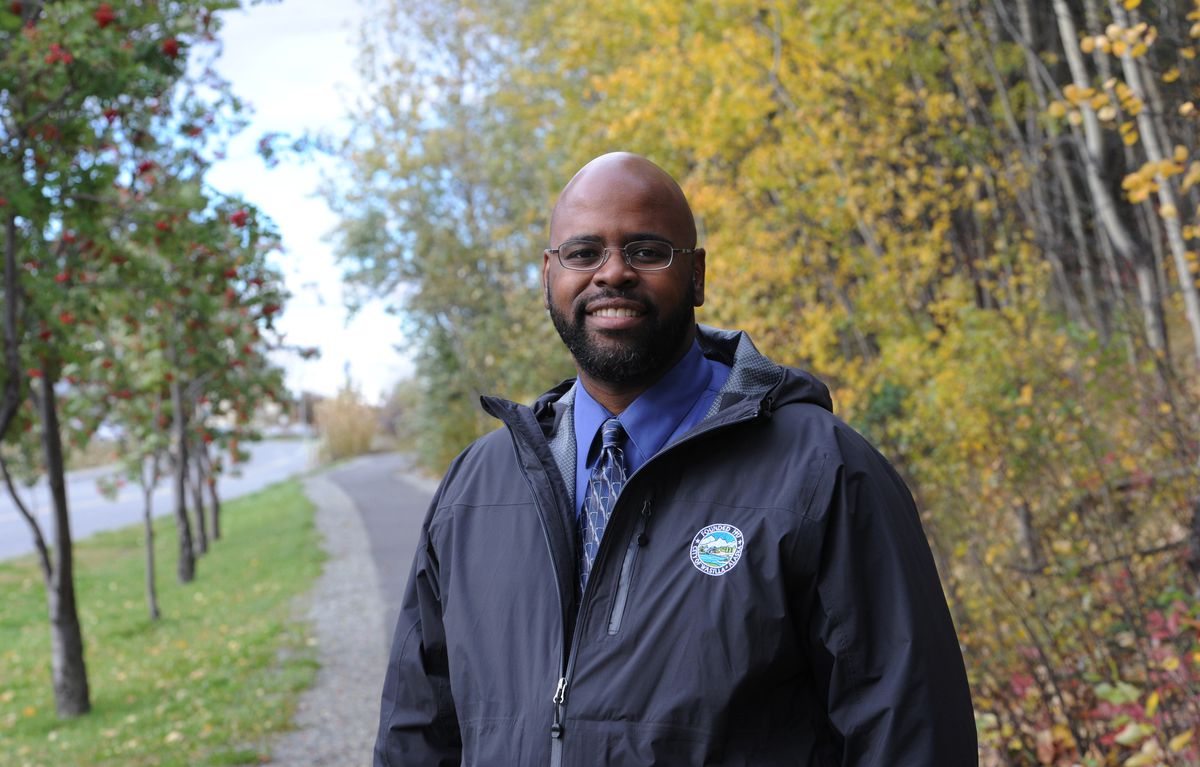 David Wilson, who serves on the Wasilla City Council, is a candidate for the Alaska state Senate. (Bill Roth / Alaska Dispatch News)

David Wilson, who serves on the Wasilla City Council, is a candidate for the Alaska state Senate. (Bill Roth / Alaska Dispatch News)

WASILLA — David Wilson is poised to become the first African-American from Mat-Su elected to the state Senate.

The soft-spoken 35-year-old Wasilla city councilman who wasn't even a registered Republican until last year stunned the establishment when he toppled Lynn Gattis for an open Senate seat in the August GOP primary. No Democrat is running against him for the Senate District D seat vacated by the retirement of Republican Sen. Charlie Huggins.

Wilson is also poised to become an asset for a state GOP looking to embrace youth and diversity. But first, he'll need to win over some district party leaders still reeling from the Gattis loss.

That's a work in progress.

Wilson said he respects Alaska Republican Party chair Tuckerman Babcock. But, he added, he told Babcock he won't represent the party until it gives him the same kind of welcome he's gotten when he visits a church for the first time.

"I told Tuckerman, once I feel this, then the Republican Party can feel free to use me. Look, we obviously are an inclusive party. Obviously we support people of a youthful age," he said. "When I go to visit a church for the first time, I get phone calls. I get emails. I should get that from a party that wants membership, that wants more than just to raise money."

Wilson doesn't have an opponent in the November general election and Gattis decided against mounting a write-in campaign.

Wilson was registered as nonpartisan until he switched to Republican in October 2015, according to the Alaska Division of Elections. And, he said, he's gotten less support from the District 7 Republican Party leadership than he expected.

He expected district officials to pull together after the primary despite any adversarial roles beforehand. He said he experienced "little engagement" after he attended meetings and functions, however.

Wilson said "someone who is heavily involved in party leadership" pressed him to define the differences between him and Gattis in the Senate.

"I understand 48 percent of folks didn't want me to be their senator … but I still plan to represent them to the best of my ability," he said. "But some folks in leadership positions within the party haven't come around to that yet."

If there is any reluctance on the district level, he said, it's because leaders were so familiar with Gattis.

"They were probably shocked that somebody defeated her," Babcock said. "And good for David Wilson; he ran a good campaign."

District 7 chair Glenda Ledford declined to answer questions about Wilson because Gattis is a close friend.

Gretchen O'Barr, who serves on the Wasilla City Council with Wilson and is the party's district secretary, said she's heard some grumbling about Wilson. She herself expressed admiration for his character.

"There's a little bit of something going on there," she said, describing the grumbling sentiment as, "who do you think you are, and overturning the apple cart."

Wilson grew up in California but came to Alaska 15 years ago for a psychology degree at Alaska Pacific University. He now works as the domestic violence and substance abuse program director at a Valley-based nonprofit, Alaska Family Services. His wife, Aleta, grew up on the Lower Yukon River. They met at APU.

Wilson credits his parents with raising him in a Christian home and instilling in him and his siblings the value of hard work but also of making informed, independent decisions.

Only a few African-American Alaskans have served in the Legislature, among them former 1980s-era Anchorage Republican Rep. Walter Furnace and Anchorage Democrat Bettye Davis, who was elected the first African-American state senator in 2000 after nearly a decade in the House.

Wilson said his relatively young age is a generally a bigger social hurdle for him than his race.

"That's not to say I haven't had my trials and tribulations with diversity and racism," he said.

Wilson said rather than overt discrimination, he sometimes experiences "hidden, unseen racism" borne of being black in a mostly white place like the Matanuska-Susitna Borough, where the U.S. census estimates 1.4 percent of roughly 101,000  residents identify themselves as "Black or African American alone."

A little girl in the Wasilla Target store stared at him and told her mother she'd never seen a black man before. A little boy in the Home Depot parking lot asked his mom if Wilson was going to steal their car.

"I was probably dressed as I am now," Wilson said during an interview at a Wasilla coffee shop. He wore a dress shirt and tie with striped trousers.

Wilson said he sometimes feels "brushed off" in public.

"It's been tough for me to go to a lot of these functions, fundraisers," he said. "I am the odd one out. In age and minority."

Time on the council

Wilson spent the last four years on the Wasilla City Council, where he was the first African-American to serve on that body.

He earned a reputation as a bright, easygoing member who sticks up for his beliefs, and as one who listens more than he speaks. Among other issues, he fought to keep police officers in Wasilla schools.

Fellow council member Tim Burney joined the nonpartisan body in early 2015. The self-described conservative described Wilson as a centrist and "a very smart guy. His heart's in the right place. He's always concerned about how the decisions we make affect the voters."

The council compromised, passing a temporary code change but one that addressed dwellings that were smaller than originally proposed.

"He takes a stand where he feels that his direction is sound and then he'll accommodate and work with people where there's room to compromise," Burney said.

Wilson does have a reputation, one he takes pride in, of pushing the envelope. He got grief from city administrators when he signed city documents with a smiley face. He's got one next to his signature on his Alaska driver's license and credit card, he argued. No dice.

Wilson got sideways with the city over the location of some of his campaign signs, which he eventually removed.

He also tried to move from his council chair to the audience during a discussion of funding for Alaska Family Services. Mayor Bert Cottle shut that down. Elected officials can't testify on issues before them.

Wilson said he understands the gravity of issues.

"I do like to joke around and have fun," he said. "That doesn't mean I don't understand or acknowledge the actual situations … I just don't stress out."

Wilson won his council seat without door-knocking. But he pulled out all the stops for his Senate bid: lots of door-knocking informed by the "supervoter" software developed by his old Alaska Pacific University classmate Anand Dubey.

He raised about $15,000 to Gattis' almost $45,000, according to state elections reports. Wilson paid for much of his campaign himself.

Wilson plans to resign his council seat by December and scale back his duties at Alaska Family Services.

O'Barr, who sits next to Wilson at council meetings, said she's a little worried the transition to the Senate will be harder than he realizes.

She's concerned about him — about anybody — moving from the consensus of Wasilla's local government to the political climate and behind-the-scenes strategizing of the Capitol.

"Because we have had that atmosphere of getting along with each other," O'Barr said. "All of a sudden he'll be stuck with decisions about coalitions and caucuses."

Wilson, who has an MBA in health service administration, said he was thinking about how he'd write a dissertation on some of the dynamics at play in Juneau. He said he wants to confront what he sees as political gridlock there. One of his pet causes is cutting spending at the Department of Health and Social Services, which has given grants to Alaska Family Services.

"I'm sure I'm going to get into trouble from time to time," Wilson said. "I do like to have fun. I do push the envelope a little bit."