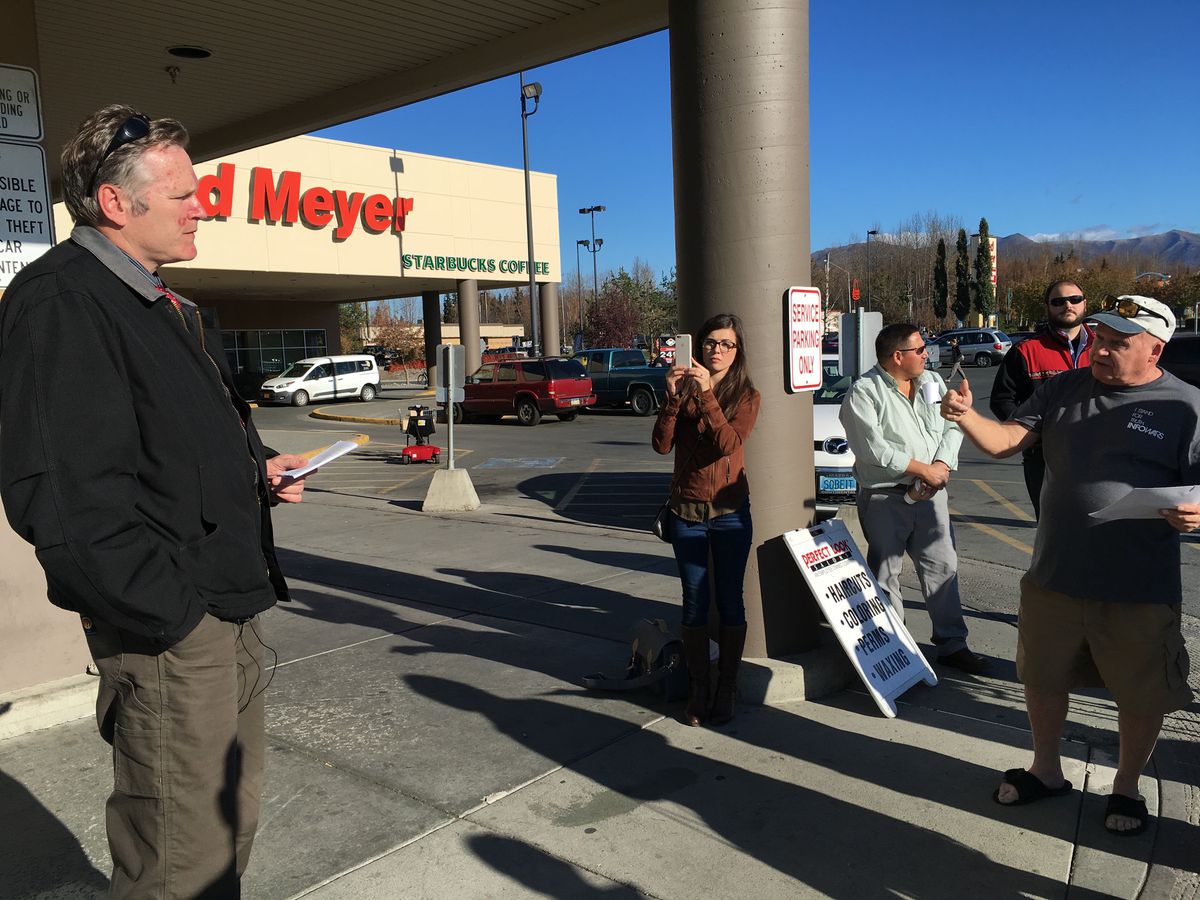 State Sen. Mike Dunleavy on Wednesday stoked an already acrimonious debate about the future of Alaskans' Permanent Fund dividends, announcing he'll introduce legislation adding $1,000 back to residents' checks after Gov. Bill Walker halved them from $2,052 with a line-item veto.

Dunleavy, a Republican from Wasilla who's not up for re-election this year, announced his plan at a news conference in the sun-baked parking lot of the Fred Meyer store off Muldoon Road.

The gathering quickly turned contentious, with Dunleavy asking for a chance "to get a word in edgewise" as a pair of conservative activists peppered him with questions — pointing out Dunleavy's Republican colleagues approved their own legislation in June that would have had the same effect as Walker's veto. The legislation, Senate Bill 128, failed to pass the House.

Dunleavy, who voted against SB 128, insisted at Wednesday's news conference the same Republican senators who opposed him in June would support his bill when the Legislature convenes in January — setting them up for what sounded like a flip-flop.

But as soon as the news conference was over, three of his colleagues, facing election season criticism for their votes in June, said they'd entertain Dunleavy's idea. They argued that their positions were consistent because they'd accepted the failure of the earlier Permanent Fund bill they'd voted for, adding that Walker's dividend reduction came without the Legislature's endorsement.

"The fact of the matter is the people, Alaskans, need the opportunity to voice their thoughts on this. And that happens through the legislative process, not a unilateral money grab by the governor," said Anchorage Republican Sen. Cathy Giessel, who's facing labor leader Vince Beltrami, an independent, in November.

Dunleavy's new legislation, which would set aside another $666 million aside for dividends, faces a likely veto from Walker, who says the state can't keep paying $2,000 checks when there's a multibillion-dollar deficit.

"With our state facing its gravest fiscal crisis in history, my administration and I remain focused on enacting a complete plan that will bring economic stability to this and future generations of Alaskans," Walker said in a prepared statement Wednesday.

But the governor's dividend veto currently presents a political opportunity for both Democratic and Republican lawmakers, who are now sticking up for the cash payments during election season, Persily added.

"Gee, it's an election year," Persily said in a phone interview Wednesday. "I can't think of any more sensitive issue in an election season than the Permanent Fund dividend. It transcends crime and education and long-term fiscal planning and all the other issues of the community."

Dunleavy's news conference came a day before the state makes its first round of dividend payments.

Dunleavy said he chose Fred Meyer as the location because he was in town, and because the grocery chain — which has more than 130 stores in Alaska and the Pacific Northwest — is a "small business." His invitation drew a handful of reporters, legislative aides, and a former Republican state Senate candidate, Jeff Landfield of South Anchorage.

"I'm just going shopping. What are you guys doing here?" Landfield quipped when he arrived.

Dunleavy, in a dark Carhartt jacket over a dress shirt and tie, introduced his legislation by saying "many of us believe that before we take the Permanent Fund in any form or fashion, we need to reduce the size of government." But pressed repeatedly for specifics, Dunleavy said only that lawmakers need to "look at" state spending in areas like education, its ferry system, and tax credits.

And when Dunleavy started taking questions, the first one came not from a reporter but from an angry constituent from Talkeetna, Kenneth Bottcher, a 52-year-old retired Bering Sea crab fisherman.

Bottcher pointed out the Senate's Republican leadership refused to convene with the House during a special session in July for a vote on whether to override Walker's dividend veto. He asked Dunleavy if that was because "they were afraid to expose the liberal progressives who were hiding among the elected ranks of Republicans in Juneau."

Dunleavy said he didn't think that was the case. But the next questioner, cold fusion advocate and perennial political candidate Paul Kendall, said "he couldn't agree more."

"That dividend belongs to all of us people, because it is the most wondrous of all equal distributions of shared wealth in the state," Kendall said.

After 40 minutes, Dunleavy ended the back-and-forth, saying he needed a drink. But before he could get one, he was pulled aside by the manager of the Fred Meyer store — who earlier lightly chastised the senator for not asking permission to hold the news conference on private property — who said he wondered how the state could possibly balance its budget without new sources of revenue.

Many budget experts have dismissed a cuts-only approach as unrealistic, noting that every state employee could be fired and Alaska would still be left with a deficit.

"It's not free, and there's going to have to be decisions made," Dunleavy responded.

Senators who voted for the Permanent Fund legislation, which passed 14-5 before failing in the House Finance Committee, have been facing a backlash since Walker's line-item veto.

Members of a 15,000-person anti-veto Facebook group have accused Walker of theft, branded Giessel a "PFD traitor," and called another Republican in a tight re-election campaign, John Coghill of North Pole, a PFD "coward."

There's also a new radio ad from by a political group, Together for Alaska, backed by unions, oil and gas attorney Robin Brena, and a pair of executives with telecommunications company GCI.

It accuses Coghill of "voting to reduce your dividend forever, taking money out of the Permanent Fund rather than ask Big Oil to pay its fair share."

Coghill, the Senate's majority leader, was traveling in Valdez on Wednesday and unavailable for comment, an aide said.

But another member of the Senate's Republican leadership, Anna MacKinnon of Eagle River, said Dunleavy's legislation would make for an "interesting conversation."

She suggested she'd be open to the bill by pointing out that her majority caucus voted multiple times "for a full funding of the Permanent Fund dividend" — though those votes occurred in an earlier state budget process separate from the Senate's vote to restructure the fund and reduce dividends.

Like Giessel, MacKinnon played down the Senate's vote on the Permanent Fund legislation because it never took effect, having failed to gather enough support in the House.

"I have to accept when we lose something. We lost — we did not have the support to change or solve our fiscal problem this last legislative session," MacKinnon said in a phone interview, likening Walker's veto to a "fiat."

Of the 13 members of the Senate's Republican-led majority that voted for the Permanent Fund legislation, two others returned phone messages Wednesday, Anchorage Republicans Mia Costello and Lesil McGuire.

Costello said she was open to Dunleavy's legislation, while McGuire, who's retiring at the end of the year, sounded skeptical.

"Alaska is at a crossroads. We don't have the money to continue on with business as usual," said McGuire, who has been one of the Senate's most vocal advocates for the Permanent Fund legislation. "I wish we would spend more time looking forward as opposed to backward."