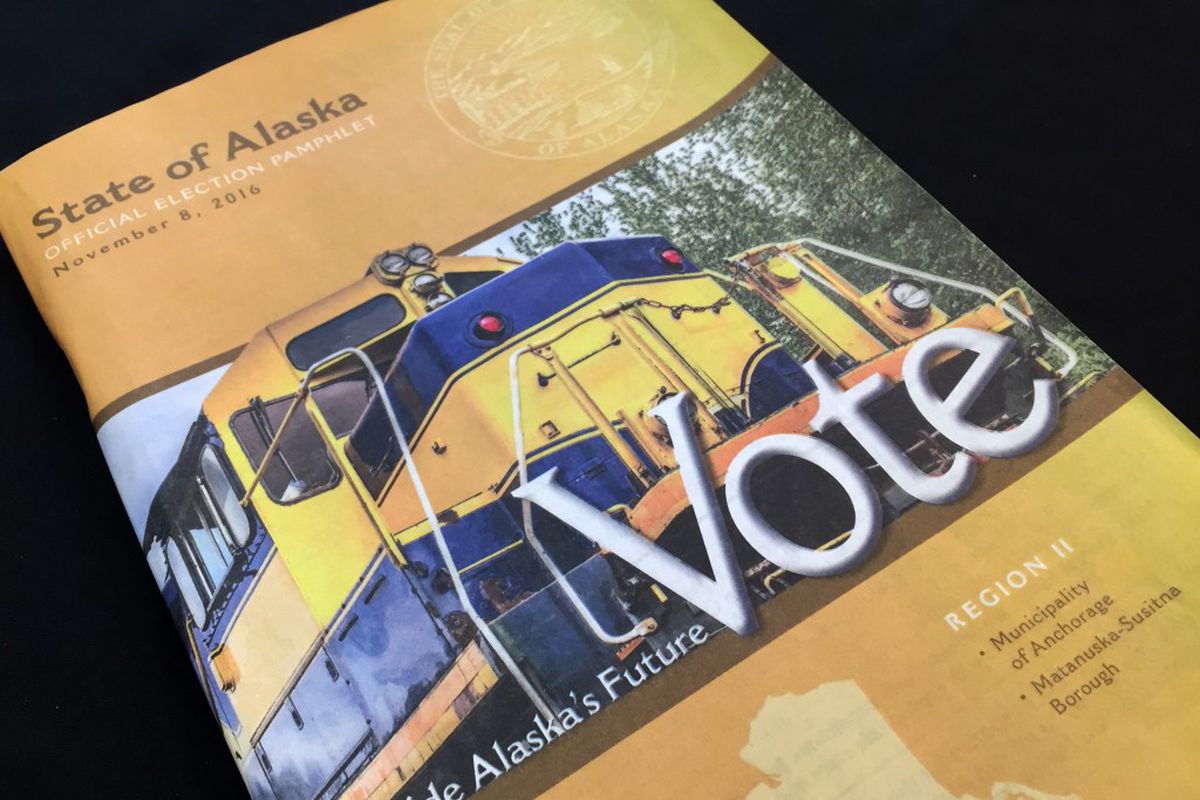 The 2016 Alaska election pamphlet does not include information on presidential candidates Donald Trump and Gary Johnson because their campaigns did not submit anything. (Erik Hill / Alaska Dispatch News)

The 2016 Alaska election pamphlet does not include information on presidential candidates Donald Trump and Gary Johnson because their campaigns did not submit anything. (Erik Hill / Alaska Dispatch News)

Alaskans looking for help with their presidential pick by reading the state's official election pamphlets will find themselves short of information on Republican nominee Donald Trump, Libertarian Gary Johnson and their running mates.

The election pamphlets began arriving in registered voters' mailboxes this week and some Alaskans were quick to notice that there was no profile of Trump or his running mate, Indiana Gov. Mike Pence; nor was there information on Johnson and his running mate, former Massachusetts Gov. Bill Weld.

That's because the Trump and Johnson campaigns didn't submit anything. The candidates will still appear on voters' ballots.

The state asked the Republican National Committee and the Alaska Republican Party for the information — and for contact information for the Trump campaign — but nothing ever came, according to Josie Bahnke, director of the Alaska Division of Elections.

The Alaska Division of Elections sent a letter to the Republican National Committee accepting Trump's nomination, using the contact information on the certificate of nomination the RNC had sent to the state, according to Bahnke.

Bahnke shared an email with Alaska Dispatch News that she sent to Alaska Republican Party Chairman Tuckerman Babcock on Thursday morning in response to questions about the pamphlet. (Bahnke did not share Babcock's email, only her response.)

But nobody ever responded, from either the state or national Republican Party.

The campaigns' oversight is not without some precedent: The Division of Elections appended the same "did not submit" notification for Green Party nominee Jill Stein in 2012 and for Alaskan Independence candidate Chuck Baldwin in 2008.

Biographies were included for all presidential candidates in 2004, 2000 and 1996. The 1992 pamphlet available online includes no biographical information about any presidential candidates. (Ironically, that year smashed records for voter turnout in Alaska: 83 percent of registered voters cast a ballot in 1992.)

The statutory deadline to submit information about presidential candidates is Aug. 30.

The Division of Elections releases an official election pamphlet each year that provides information on how and where to vote, and which candidates are up for election in each of four regions across the state. It also includes biographical information provided by candidates and information about ballot measures up for a vote. The booklets are sent to each registered voter's home address and are made available online. The state also provides an audio version online and over the phone (888-820-4524).