In a first, AFN board endorses a presidential candidate -- Clinton 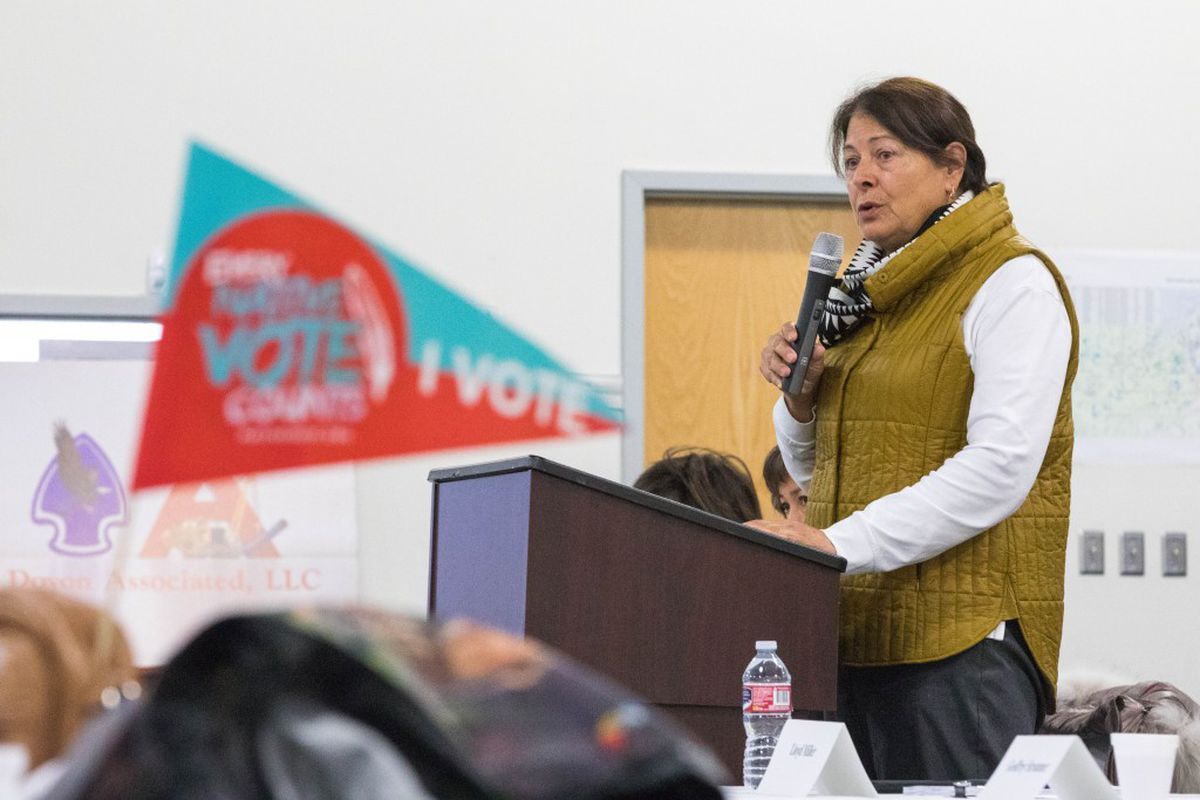 Alaska Federation of Natives president Julie Kitka announces Oct. 19, 2016, that the AFN board will endorse Hillary Clinton for president, during a National Congress of American Indians conference in Fairbanks. AFN has never before endorsed a presidential candidate. (Loren Holmes / Alaska Dispatch News)

Alaska Federation of Natives president Julie Kitka announces Oct. 19, 2016, that the AFN board will endorse Hillary Clinton for president, during a National Congress of American Indians conference in Fairbanks. AFN has never before endorsed a presidential candidate. (Loren Holmes / Alaska Dispatch News)

FAIRBANKS — Just as thousands of people were descending on Fairbanks for the Alaska Federation of Natives' annual convention, the influential organization's board endorsed Hillary Clinton for president, calling her "the right leader."

Julie Kitka, AFN president, told a pre-convention tribal conference Wednesday it was the first time in AFN's 50-year history that it was making an endorsement for president.

The announcement came at a joint conference of AFN and the National Congress of American Indians.

The board decided to take the step at its meeting Tuesday. Kitka said at the joint conference that the board is not trying to tell anyone how to vote but is giving members guidance as it urges them to go to the polls.

[The AFN convention gets underway in Fairbanks this week. Why it's a must for candidates running for statewide office.]

In a written statement Wednesday, AFN said Clinton, the Democratic nominee, clearly would work with Native American people while Republican Donald Trump would do the opposite.

"Hillary Clinton's priorities are so much in line with our community's priorities that the board was compelled to break with tradition," AFN said in a written statement. Some board members abstained because they needed to check with their groups at home.

AFN said Clinton as a U.S. senator and secretary of state demonstrated she could support the interests of Native people. The group expects her to do the same as president.

"She has committed to continue working directly with us, to honor the special trust relationship between indigenous peoples and the federal government, and to open the door and welcome Native Americans into her administration with respect and a genuine commitment to working together," AFN said.

Kitka said Native people interested in working for the next administration should make that known.

Native Americans vote in smaller numbers proportionally than do other groups, but they tend to vote as a strong bloc and can make a difference, Jacqueline Pata, executive director of the National Congress of American Indians, told the conference Wednesday. Her group does not endorse candidates, she said.

The AFN convention begins Thursday and continues through Saturday. Delegates can also consider political endorsements by the group as a whole.

In recent years, AFN has endorsed some statewide candidates during its convention. But it does so rarely and, as Kitka said, its board has never before done so in a presidential contest.