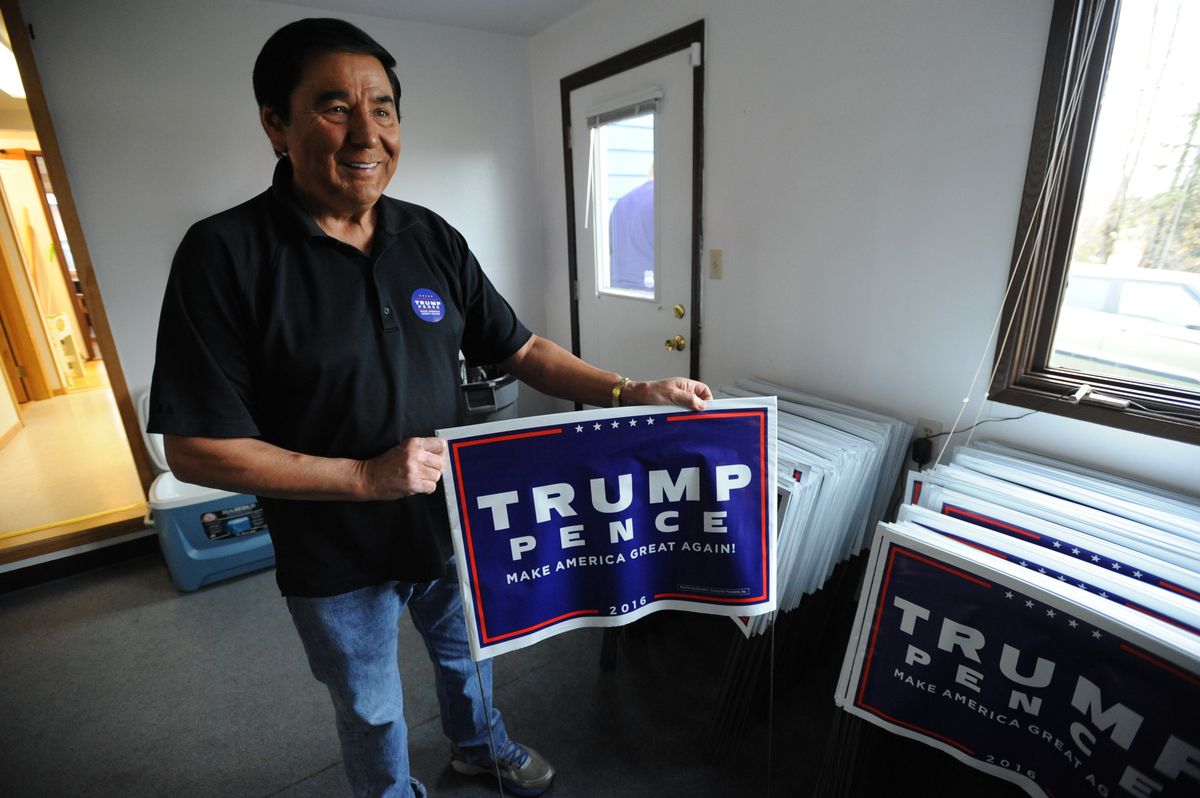 Alaska is typically Republican turf, with an all-GOP congressional delegation and three electoral votes that haven't gone to a Democratic presidential candidate since Lyndon Johnson beat Barry Goldwater in the 1964 landslide.

So what explains Alaskans' apparent weak support for Donald Trump?

A poll released by Republican U.S. Sen. Lisa Murkowski this month showed her party's presidential nominee at 37 percent, only three points up on Hillary Clinton, and an Alaska Dispatch News survey at the end of September showed Trump at 36 percent, a little less than 6 points ahead of Clinton. In the last presidential election in 2012, Mitt Romney got just under 55 percent of Alaskans' votes.

Both of Alaska's Republican U.S. senators, Murkowski and Dan Sullivan, have withdrawn their support from Trump. And Republicans around the state report few signs of a Trump groundswell — even in Ketchikan, the Southeast city of 8,000 that's seen its pulp mill shuttered and its timber industry battered, making it Alaska's closest parallel to the troubled brick-belt factory towns where Trump has found strong support.

"You can drive through this town and not see a Hillary sign or a Trump sign," said Republican Lew Williams, Ketchikan's mayor and a Trump supporter. "I've never seen a quieter presidential election in this community."

Political experts and partisans offer an array of explanations for why Trump has failed to find much of a toehold in the 49th state, from demographics to economics to simple geographic distance.

And some of Trump's boosters in Alaska question that entire notion. The candidate's state director, former Republican state Sen. Jerry Ward, gave a Trump-like dismissal of the idea that the real estate mogul's campaign hasn't been embraced by Alaskans, calling it "completely false."

"You haven't been around the city. We've got hundreds of volunteers. Trump's going to carry probably 45 states," Ward said. "Welcome to the real world, my friend."

But outside of Trump's most ardent supporters, even Tuckerman Babcock, the Alaska Republican Party chair, acknowledged that it's been difficult to rally the rank and file behind his standard bearer this year. The party released an ad last week telling voters that the election represents "so much more than who we support for president."

Trump, Babcock said, "speaks naturally to people in the cities and to people who have suffered grievous loss from trade deals, illegal immigration."

"Alaska is in a different situation," he added.

Trump placed second in the Alaska GOP primary in March, behind Ted Cruz, who found his strongest support among social conservatives and evangelicals.

But the 33.5 percent Trump captured equated to just 7,350 votes, or barely 5 percent of the state's 140,000 registered Republicans. Republicans themselves make up about one-fourth of Alaska's electorate, with more than half of registered voters declining to affiliate with a party.

The archetypal Trump voter comes from a small town in the Midwest, once had a job at the auto plant making $30 an hour but now earns half as much because the plant closed, said Jennifer Duffy, senior editor of the Cook Political Report, an independent, nonpartisan newsletter published in Washington, D.C. Trump has particularly consistent support from white people who lack college degrees, she added, though polling in the last few days also showed Trump drawing stronger support from college-educated whites.

"It's a lot of pent-up anger at the state of the economy and a class that hasn't caught up yet with the recovery," Duffy said. "They're over the establishment. They're over immigration. I'm not really sure how much of that you have in Alaska — you don't have people coming from Mexico and taking jobs away."

Demographic and employment data show that Alaska sits apart from some of the battleground states where Trump is finding more avid support.

Four years after Barack Obama narrowly carried Ohio, the presidential candidates are neck-and-neck in the state, which is 83 percent white — and where slightly more than half of residents are whites without college degrees. The population of non-college-educated whites rises to 62 percent in Iowa, where there's a nonwhite population of 6 percent, and which polls also show as a toss-up.

The national recession that pummeled the Outside economy barely touched petroleum-dependent Alaska, where prosperity is tightly linked to global oil markets instead. A recent crash in oil prices has cost Alaska jobs, but only over the last year or so, said Neal Fried, an economist with the state labor department.

And, Fried said, the state doesn't have a factory base that's competed with China — a target of Trump's protectionist policies and rhetoric. In fact, Alaska would like to sell one of its biggest resources — natural gas — to China and other Asian countries that have factories in competition with America.

"Our economy is about as different from the rest of the country as it can be," Fried said in a phone interview. "The Great Recession that hit the country very, very hard for four or five years — we hardly felt it."

Trump also hasn't spoken to some of Alaska Republicans' priorities, like easing access to natural resources and federal lands, in the same way other GOP presidential candidates did. Cruz, for instance, sponsored legislation in the U.S. Senate to cap federal land ownership at 50 percent in any state, forcing a 10 percent reduction from Alaska's status quo.

In January, Trump said he didn't like the idea of handing federal lands over to states, and he's disappointed some Alaska Republicans with his relative silence on local lands issues, like allowing oil and gas development in the Arctic National Wildlife Refuge or the construction of a road between Cold Bay and King Cove through a different federal refuge on the Alaska Peninsula.

"I don't know if he even mentioned opening up ANWR," said Mike Tauriainen, who owns an engineering firm on the Kenai Peninsula and was one of the Alaska Republican Party's Cruz delegates at the GOP's national convention earlier this year. "Just his general philosophy, you know that's where he's leaning. But he could come out and be a lot more positive, definitive on that — opening ANWR, getting federal lands transferred to the state and not shutting down the road out at Cold Bay."

Tauriainen said he also gets frustrated by Trump's tendency to "shoot himself in the foot."

Trump's backers acknowledge that the candidate hasn't paid much attention to Alaska. But that's by design, said Jim Crawford, the Anchorage real estate broker who doubles as Trump's chairman and spokesman in Alaska.

"The Trump campaign comes to me and says, 'How much money should we spend in Alaska?' My response is, 'Don't spend a dime,'" Crawford said in a phone interview. "Alaska is a red state. We will deliver this election to Donald Trump."

Crawford pledged that a Trump presidency would come with many Alaska-specific benefits. Among them: Trump could become "negotiator in chief" for the long-promised but never-delivered gas pipeline from the North Slope. He would support legislation to require state approval of the expansion of any national parks or monuments. And the candidate, with his real estate holdings, would use his own knowledge of tourism to boost Alaska's industry, Crawford said.

"Donald Trump probably understands it better than any man alive. He builds hotels for a living," Crawford said. "I don't know if we can get a Trump Tower in Alaska, but maybe we can. Who knows?"

Crawford said he wasn't losing sleep over a Clinton victory in Alaska or the state's "potential purpling," mixing Democratic blue with Republican red — neither would happen, he said. And in interviews, Republicans said they weren't planning to defect to the Democratic candidate. They're just not particularly excited to vote for Trump.

"Most of the people I know, he was their 17th choice," said Jim Minnery, who runs the social conservative group Alaska Family Action. Minnery paraphrased the right-wing talk show host Dennis Prager to describe his position on Trump: He's not voting for or supporting the candidate himself — he's voting for the "best current vehicle" available to set the country on the path he wants.

"It's not a personality contest. Every once in a while for us, on the conservative side, we get a Ronald Reagan," Minnery said. "Other times, we get a Donald Trump and we're not very pleased with that."

Meanwhile, Clinton supporters hope they're seeing an entry point to Alaska that hasn't existed for Democrats in decades. The Clinton campaign this week dispatched one of Murkowski's key Democratic allies, Washington Sen. Maria Cantwell, to Alaska to raise money — with donors at the "changemaker" level asked to write $33,400 checks to be split between Clinton's campaign and the national Democratic Party.

The Libertarian Party ticket, meanwhile, is hitting double-digits in some polls in the state, and vice presidential candidate Bill Weld stumped in Anchorage last week.

Trump's success in Alaska will likely hinge on his ability to win its nonpartisan and undeclared voters, who make up 53 percent of the state's electorate.

Babcock, the Alaska Republican Party chairman, said he's had to think hard about how to sell his full slate of GOP candidates — which, in Murkowski, includes a candidate who condemned the man atop her party's ticket.

"At all levels, it's been a particularly trying year because the issues cut across different districts and different candidates," Babcock said.

The pitch he ultimately settled on is that the country will be led by one of the two "teams" after the election. Alaska, Babcock argues, would be better off with a Republican White House and Congress, "regardless of how you feel about a particular candidate."

"By and large, everyone aligns more with one team than another," he said. "That's the message the Republican Party is pushing."