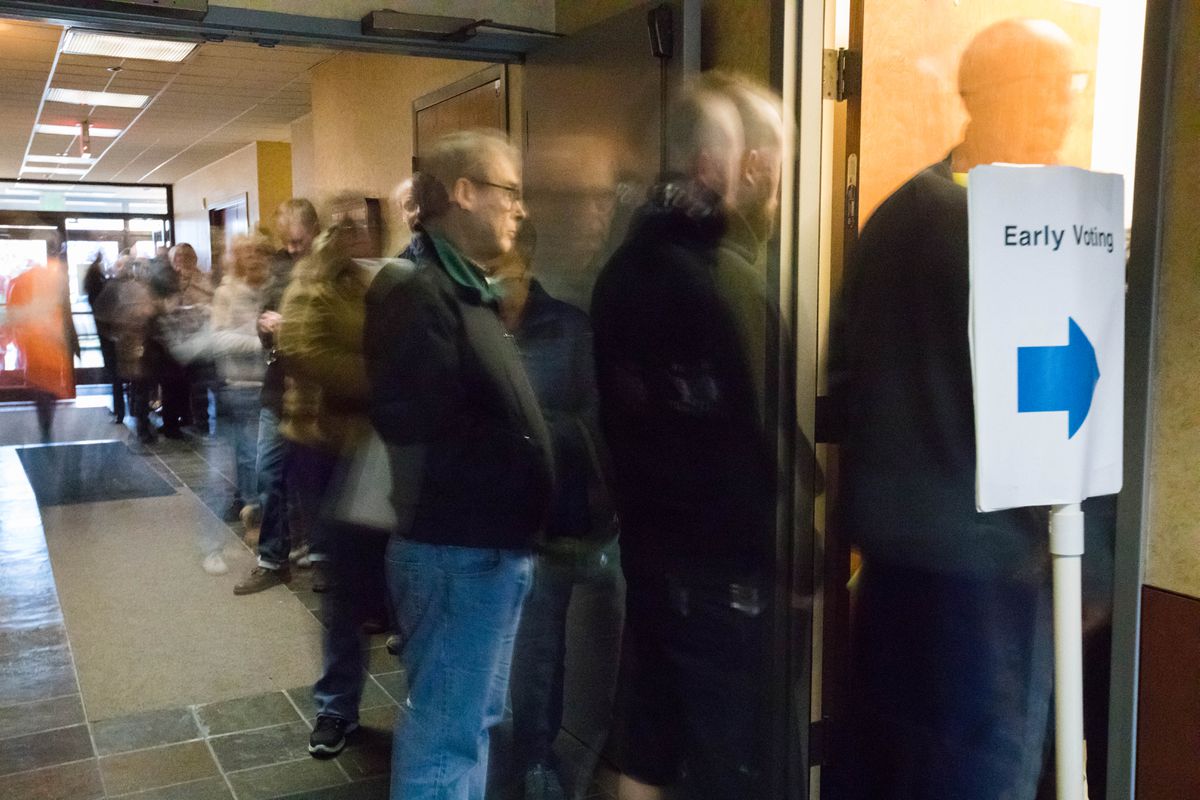 In Anchorage, the line is long — occasionally out the door of the Division of Elections office on Gambell Street in Midtown — but voters said it moved quickly and praised the convenience of casting their ballot before Tuesday's big show.

Early in-person votes go right into the ballot box and are counted on Tuesday, along with ones turned in at the polls. Since the ballots aren't tallied until Tuesday, there's no real way to tell how people are voting. And it's not entirely clear what's driving the increased early turnout.

By the end of Wednesday, two-thirds of the way through the 15-day early voting period — 22,114 early votes had been cast. Nearly as many absentee ballots have been turned in so far.

Absentee ballots and early votes submitted outside the five regional offices will be counted within 15 days of Election Day, after voters are verified at the regional offices and then by a bipartisan review board.

In 2012, 19,987 early votes were cast. In 2014, 22,200 Alaskans voted before Election Day, said Carol Thompson, who works for the state Division of Elections in Anchorage, and can rattle years' worth of voter tallies off the top of her head.

Nationwide, more than a third of voters are expected to vote early this year, a tally that represents a steady year-to-year climb and a 100 percent jump since 2000.

Generally turnout has been slower in the mornings, and the line grows throughout the day, Thompson said.

In late afternoon Thursday, within an hour of the poll closing for the day, voters streamed in and out of the building, often expressing surprise at the sight of the line that reached the glass doors. "Wow," one said. "Oh! Goodness!" another remarked. "At least it's not Saturday," one woman said to a friend. Another woman arrived, saw the line, and turned around, shaking her head and muttering, "Tuesday," to herself.

Christie Love, 42, said she voted early last year, and came back to do it again this year to get her ballot cast and counted before the presidential race was called, as it often is before Alaska's polls even close.

"I feel better thinking it might get counted" before the race is over, she said. It took her 15 minutes to vote.

Others turned out early as a show of support for their preferred candidates.
Tricia O'Brien, 55, voted Thursday, motivated to vote early after Democratic presidential nominee Hillary Clinton encouraged supporters to do so at a rally a few weeks back, she said. O'Brien noted, however, that she hasn't seen much enthusiasm for any presidential candidate around Anchorage, where there are few yard signs or bumper-stickers to be found for Clinton or GOP nominee Donald Trump.

Joan Clover, 60, came out to vote early to "make sure nothing went wrong" and that her vote would be counted. Clover, a Clinton supporter, also wanted to be free Tuesday to work as a poll watcher, and was headed to a training session Thursday night.

But quite a few voters who cast their ballots on Thursday said they just wanted to get it out of the way and avoid Election Day crowds.

Ralph Pasana said he votes early every year to avoid the rush on Tuesday. It was the first time he'd seen a line that long, but it moved pretty quickly, Pasana, 28, said.

Most voters said it took them 10 or 15 minutes to get in and out of the voter booth in Anchorage, despite longer lines.

It's convenient, and "they do a good job," said Rick Onorato, 64, in Anchorage.