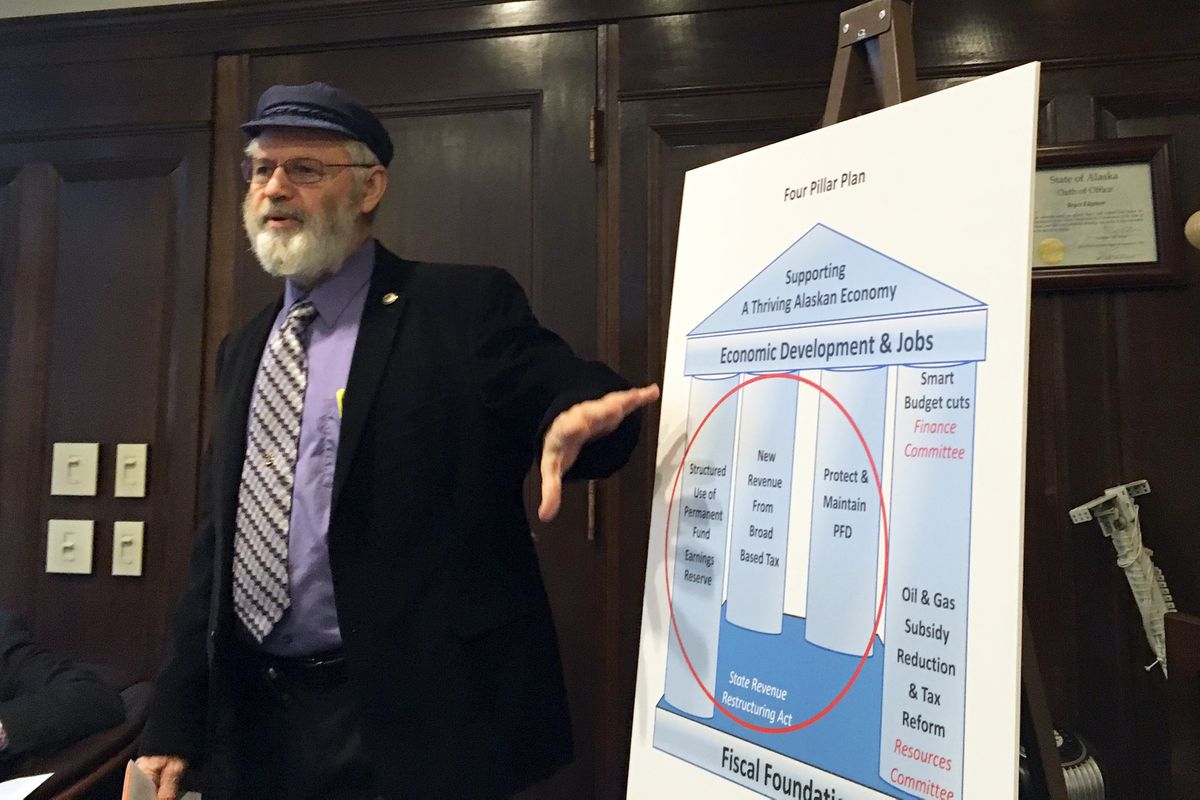 Homer Republican Rep. Paul Seaton describes new legislation that would restructure the Permanent Fund and levy an income tax to reduce the state’s $3 billion deficit, during a briefing with reporters on Friday in Juneau. (Nathaniel Herz / Alaska Dispatch News)

Homer Republican Rep. Paul Seaton describes new legislation that would restructure the Permanent Fund and levy an income tax to reduce the state’s $3 billion deficit, during a briefing with reporters on Friday in Juneau. (Nathaniel Herz / Alaska Dispatch News)

The measure, House Bill 115, was developed by Homer Republican Rep. Paul Seaton and Nome Democratic Rep. Neal Foster, working with their predominantly Democratic colleagues. It would use one-third of the Permanent Fund's earnings to pay dividends estimated at $1,100. The remaining two-thirds, about $1.75 billion a year, would pay for state services.

The total revenue available from the $56 billion fund, which is seeded with Alaska oil money, would be 4.75 percent of its overall market value — an endowment-like approach that's long been endorsed by the fund's trustees and is similar to a proposal from Gov. Bill Walker.

Sen. Bert Stedman, R-Sitka, has introduced his own bill to use a portion of the fund's market value for state government, and it would also require the fund to continue to pay Permanent Fund dividends to Alaskans.

The tax provisions in the new House legislation would apply to income earned in Alaska by residents and nonresidents, with the rate set at 15 percent of the person's federal tax bill. It would also tax capital gains at 10 percent, two-thirds of what the IRS charges most taxpayers.

The tax could be charged against residents' dividends, with any money left over paid as a refund.

The legislation would set a minimum tax of $25, which Seaton described as a way to ensure all residents have a stake in state government. Projections by Seaton's office show a married couple with two children and a $150,000 income would be taxed $2,980, while a single person with an income of $40,000 and no children would pay $600.

The taxes would yield an estimated $655 million a year.

Seaton and Foster said they proposed the tax so the cost of state government doesn't fall disproportionately hard on low-income Alaskans, for whom dividends make up a larger share of annual income.

Wealthier people would pay more under their proposal, since their income tax bills would likely increase with their earnings.

"We want this to be a fair fiscal plan," Foster said at a briefing with reporters Friday morning. "If we don't do anything else, then we have to take more from the PFD."

The flurry of proposals this year demonstrates how the state's plummeting oil revenues and quickly diminishing savings have advanced the Legislature's debate about the Permanent Fund's future.

The fund is known as the "third rail" of Alaska politics because touching it can kill a legislator's career, and similar legislation that Seaton offered over the past two years never advanced out of committee.

But with not much more than another budget year's worth of cash in the state's primary savings account, the conversation in some parts of the Capitol is no longer about whether to touch the fund, but how.

"You can feel it here in the building vis-a-vis last year, where there wasn't a broad agreement that we needed to take decisive action," said House Speaker Bryce Edgmon, D-Dillingham, who presented HB 115 to reporters Friday morning along with Seaton and Foster. "It's a big difference."

Even some of the Legislature's most conservative lawmakers — those from the Mat-Su — now seem to be recognizing the Permanent Fund's necessity in closing Alaska's budget gap.

Wasilla Republican Sen. Mike Dunleavy last month unveiled his own plan that would preserve Permanent Fund dividend checks at recent amounts of $2,000 or more, while using the same amount of investment earnings to help pay the costs of government. That proposal, however, relies on steep budget cuts of more than $1 billion.

The different Permanent Fund plans — from the senators, Walker and the House members — all grapple with tradeoffs between the amount of cash they make available for state spending, the size of residents' dividends and how much money is left over to allow the fund to increase its value.

"All of these bills balance differently between these values," said Ian Laing, the new executive director for Alaska's Future — a business-backed group pushing lawmakers to use the fund to reduce the deficit.

Laing, working with an economist hired by telecommunications company GCI, has been working this week out of a lobbyist's office a block from the Capitol. With boxed lunches, a projector and a $20 roll-up screen from Amazon tacked to a window frame, the economist, Alan Mitchell, has been presenting lawmakers and aides with a spreadsheet showing the tradeoffs of the different Permanent Fund plans.

"We'll support any plan that moves us toward a sustainable world," Laing said.

The two partisan factions that control the House and Senate are approaching the dilemma differently.

The Republican-led Senate majority will hold its second hearing on Stedman's legislation, Senate Bill 21, next week. The bill is focused solely on the Permanent Fund and preserves a higher dividend than the new House legislation but it also leaves a much larger budget gap.

Senate Republicans' priorities this year include another $300 million in cuts to the $4.4 billion state budget, which has already been sliced from $6.1 billion two years ago. They also want to institute a new state spending cap.

The Senate president, Republican Pete Kelly of Fairbanks, reiterated his caucus' opposition to an income tax in a meeting with reporters Friday morning. And he said he and his colleagues would "do the end-zone dance" if they ended the year with a restructured Permanent Fund, their desired budget cuts and a spending limit — even if that leaves a significant deficit.

"If we do that, we buy many years on our reserves," he said.

Meanwhile, members of the House majority coalition — which is mostly Democrats, with three Republicans and two independents — are asking for bigger contributions from wealthier Alaskans and oil companies to go along with the Permanent Fund proposals.

Some of its members say they'll have a hard time supporting measures that reduce constituents' dividends unless they also secure concessions on oil taxes.

The 22-member coalition can afford a defection of just one member before it would need support on a deficit-reduction bill from the Republican minority, whose members were quick to register their opposition to the income-tax provision.

"I don't want to have anything to do with a bill that's going to look, in a time when people are struggling, to say, 'We need more money from you,'" Rep. Lance Pruitt, R-Anchorage, said in a speech on the floor in which he objected to the House Finance Committee, to which he belongs, being listed as HB 115's sponsor.

The majority coalition's organizing principle is fixing the state deficit, and the leaders who unveiled the bill Friday said they expect to be aligned with their rank-and-file members.

Another member, Fairbanks Democratic Rep. David Guttenberg, said he understands that the Legislature has to "do something" this year. But he said he still needs to dig into the details and suggested that his support for the legislation would be conditioned on lawmakers' treatment of oil taxes — particularly the cash subsidies paid to companies.

"That's a big part of closing the gap," Guttenberg said in an interview.

Anchorage Democratic Rep. Andy Josephson described HB 115 as a framework for the coalition's deficit-reduction plan — one that would likely be debated, adapted and tweaked to gain consensus.

The coalition, Josephson added, is still debating things like the rate of the income tax, the size of the dividend and the amount of Permanent Fund revenue that can be used sustainably for government spending — as well as whether there should be a spending cap.

HB 115 is scheduled for four hearings in the House Finance Committee next week, with a round of public testimony set for 1:30 p.m. Friday.