5 things from Trump's big speech that could affect Alaskans 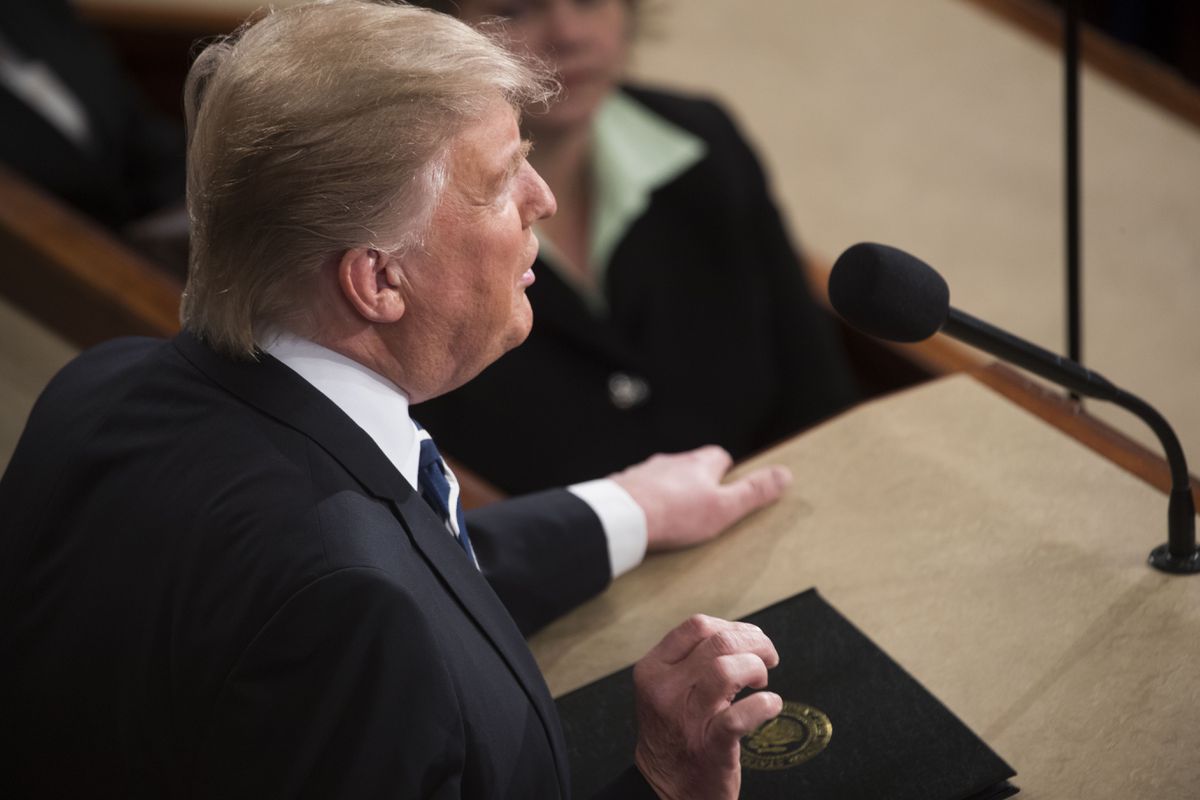 WASHINGTON — President Donald Trump offered broad plans for his American vision in an hourlong speech Tuesday night. Here's what Alaskans might want to know about some of those issues — and what members of the state's congressional delegation have to say about it.

1. The Affordable Care Act (a.k.a. Obamacare)

Trump's speech laid out a clear marker for where he wants to lead the Congress, if not the details about how to get there. In Alaska, the health care exchange is left with just one provider (Premera) and some of the highest premium costs in the nation.

While lawmakers are eager to repeal the mandate requiring citizens to acquire health insurance or pay a tax penalty, they are hesitant to let go some of the more popular provisions of the law, including Alaska's Medicaid expansion.

There's more than enough disagreement to go around in Congress about this — and that includes among Republicans. Some want the whole thing done away with, others are looking for a compromise that keeps the most popular parts of the law (requiring insurance companies to cover people despite pre-existing conditions, allowing young people to stay on their parents plans until they are 26 years old), while chucking the mandate.

Trump made clear in his speech (and past statements) that repealing and replacing Obamacare is a priority. On Tuesday, he declared a handful of guidelines:

* Keep the provision ensuring coverage for people with pre-existing conditions.

* Allow "a stable transition for Americans currently enrolled in the health care exchanges."

* Give governors "resources and flexibility" for Medicaid "to make sure no one is left out."

Alaska Sen. Lisa Murkowski, a Republican, liked it. "I agree that we must repeal and replace the ACA, but I have said I will not support a repeal that leaves people hanging," she said after the speech. "I appreciate President Trump acknowledging that we must have a stable transition for Americans currently enrolled in the health care exchanges and greatly appreciate his recognition of the importance of flexibility for states like Alaska, including the expansion of Medicaid."

Sen. Dan Sullivan, a Republican, said that the principles Trump detailed in the speech were an important sign of executive leadership on the matter.

"After the speech, I had the opportunity to chat with (Health and Human Services Secretary Tom Price)," he said, lauding the former congressman and medical doctor as someone "who knows a lot about these issues."

Sullivan said he thought Trump had set out principles that would have a "unifying" impact on Congress.

Alaska has always been a state with a heavy military presence, and the state certainly benefits from millions — over time billions — in military spending that heads to the Last Frontier.

Spending on the new F-35s, headed to Fairbanks, is expected to be boost the economy there. Per capita defense spending in Alaska often runs twice the national average, and roughly one in 10 Alaskans are veterans.

White House officials said earlier in the week that the president will submit a proposed budget to Congress that invests an additional $54 billion in the military. In his speech Tuesday, he said it will be one of "the largest increases in national defense spending in American history," and increased funding for veterans.

Murkowski lauded the plan to boost the defense budget, in general terms. "The Budget Control Act and the continued threat of sequestration has done great damage to military readiness and modernization," she said. "I appreciate the President's intention to end defense sequestration and significantly increase defense spending in the near term."

The senator also noted Trump's "characterization of the F-35 as fantastic," and said it was "welcome news to Interior Alaska which awaits the arrival of this state of the art fifth generation fighter."

Alaska Republican Rep. Don Young said of the speech, "He wants to take and improve the military; I'm with him 100 percent."

Sullivan, a members of the Marine Corps Reserve who sits on the Armed Services Committee, was encouraged by Trump's pledge to increase "investments for our military at home," particularly Alaska, he said.

Boosting infrastructure spending has long been a cornerstone of Trump's campaign promises, and members of Alaska's congressional delegation often like to remind others that Alaska, a younger state, could use some new infrastructure.

In his address to Congress, Trump asked for $1 trillion in spending on infrastructure, through some type of public-private funding mechanism.

"To launch our national rebuilding, I will be asking the Congress to approve legislation that produces a $1 trillion investment in the infrastructure of the United States — financed through both public and private capital –- creating millions of new jobs," he said.

That sounds a lot like President Barack Obama's annual request to create an "Infrastructure Bank," a method of combining public and private funding for infrastructure. It never quite got off the ground.

The $1 trillion price tag may be a lot for congressional Republicans to swallow. But Sullivan saw the request as an invitation to bargain over his infrastructure priority: loosening permitting requirements.

However Trump goes about funding infrastructure, Sullivan said it should involve permitting reform. To that end, he took the chance to pitch Trump on Tuesday afternoon, while at the White House for an unrelated event, on forthcoming legislation designed to speed permitting for infrastructure projects.

Trump took aim at improving the nation's schools during his speech, calling education "the civil rights issue of our time."

"I am calling upon members of both parties to pass an education bill that funds school choice for disadvantaged youth, including millions of African-American and Latino children. These families should be free to choose the public, private, charter, magnet, religious or home-school that is right for them," Trump said.

Murkowski, who voted against confirming Trump's Education Secretary Betsy DeVos over just this issue, was not pleased.

"We can all get behind the goal of making sure every child in America has access to a good education. However, I heard an awful lot tonight about school choice and little else, which concerns me," Murkowski said.

The senator has argued that it is simply not possible to provide school choice in very rural areas of Alaska, and is concerned that a "voucher" program could take funds away from those schools.

"We cannot allow a focus on school choice to erode our public schools. In rural America, especially rural Alaska, there is simply no opportunity for school choice, and in our urban communities many parents are satisfied with their public schools," she said.

Murkowski sits on the relevant committee for this issue: the Health, Education, Labor and Pensions Committee.

Trump took a cue from his daughter Ivanka and pitched Congress on Tuesday on child care and family leave.

"My administration wants to work with members in both parties to make child care accessible and affordable, to help ensure new parents have paid family leave," he said.

Offering (or requiring) paid family leave is not traditionally a Republican talking point.

Sullivan said that he saw it as an "olive branch" to Democrats, and perhaps a bargaining chip. Republicans have a slim majority in the Senate — 52 members to Democrats' 48 — and they need 60 votes to pass most legislation.

But Sullivan's not sold.

"I thought it was an important gesture that I applauded. Of course I'd need to see the details, and I don't know what the details or the cost of that look like. But the gesture itself, that fits in the broader theme (of the speech) of trying to unify the country, Republicans and Democrats, all Americans," he said.

"I'll have to see the details of the policy. But in the broader context of that speech, I thought that was an important moment of the speech," Sullivan said.

Trump didn't talk much about energy, save for mentions of pipeline projects he has already approved. But Murkowski and Sullivan were hopeful that a commitment to boosting energy development remained there, between the lines in the conversation about boosting the nation's economy.

"Our economy has been suffering not only in Alaska, but across the entire nation," Murkowski said. Trump's plans for "streamlining the regulatory process, allowing energy development, and building energy infrastructure in Alaska would create new jobs, reduce our deficits, refill TAPS, and strengthen our national security," she said.

"I wish he would have mentioned, as part of the plan for economic growth, energy and responsible resource development opportunities," Sullivan said. "But as you know he's talked about that quite a bit. I've talked to him about that personally. I've talked to the vice president about it.

"So I'm not concerned that they didn't talk about energy and natural resources as a key element of our economic growth, simply because I'm very confident that they're committed to it," Sullivan said.