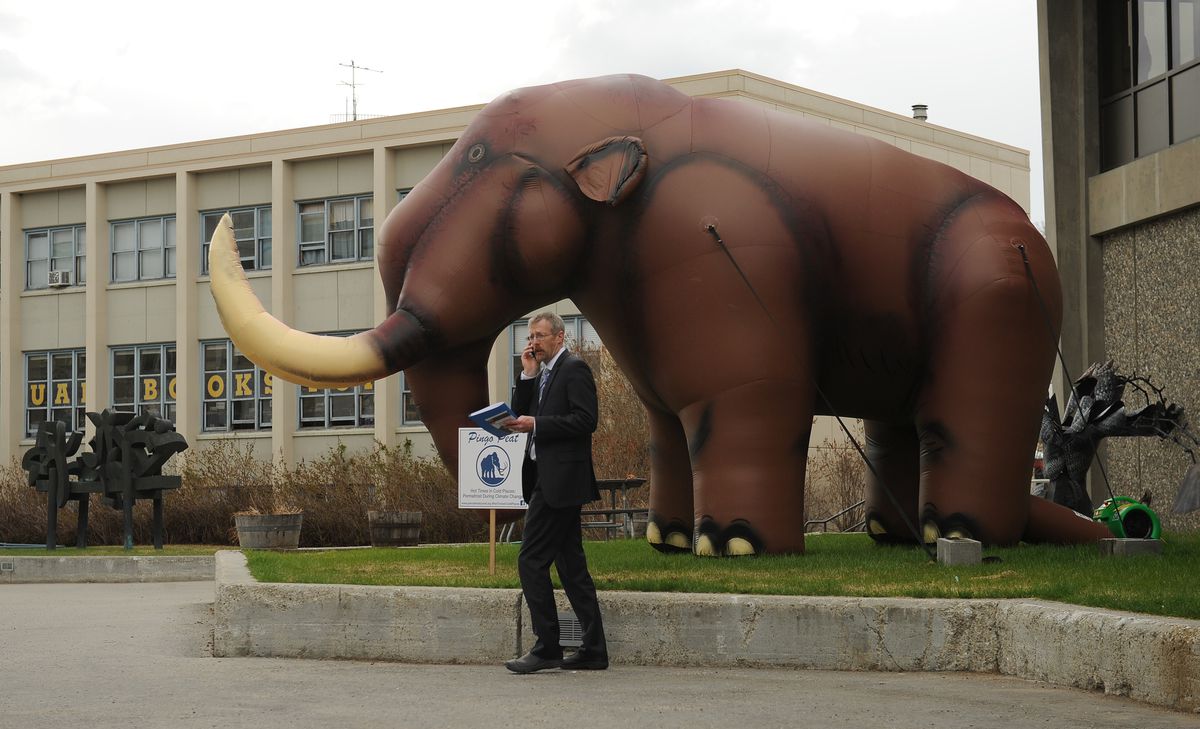 An Arctic Council attendee makes a phone call in front of an inflatable mammoth on the University of Alaska Fairbanks campus on Tuesday. (Bob Hallinen / Alaska Dispatch News)

An Arctic Council attendee makes a phone call in front of an inflatable mammoth on the University of Alaska Fairbanks campus on Tuesday. (Bob Hallinen / Alaska Dispatch News)

WASHINGTON — Alaska U.S. Sens. Lisa Murkowski and Dan Sullivan hitched a ride to Fairbanks Wednesday with Secretary of State Rex Tillerson, and the three headed to an Arctic ministerial conference there.

Representatives of Murkowski and Sullivan said Tuesday that the senators joined Tillerson on his State Department flight out of Andrews Air Force Base to Fairbanks for the Arctic conference.

The three are leaving Washington, D.C., after a morning of State Department and White House meetings with Russian officials, in the wake of President Donald Trump's decision to fire FBI Director James Comey. The FBI is pursuing an investigation into potential connections between the Trump campaign and Russia.

This week's meeting marks the end of the United States' chairmanship of the international Arctic Council, when the U.S. will hand the reins over to Finland. Tillerson will join talks with foreign ministers from the seven other Arctic nations, including Russia.

Murkowski pushed for Alaska to host the 2017 ministerial meeting, including language in a 2015 spending bill directing the secretary of state to hold the meeting as close to the U.S. Arctic as is feasible.

Given high numbers of international guests and their security needs, Fairbanks best fit the bill.

All three members of the delegation plan to attend the Thursday ministerial meeting, along with several other receptions and panels throughout the week.

Murkowski said she hoped to use the opportunity to discuss "topics such as broadband, economic development, science and research, and community resilience" with people from around the world.

"This is a significant opportunity for Alaskans and people of the Arctic to showcase our ways of life, priorities and perspectives to people from all over the world," Murkowski said.

Sullivan said in a statement Wednesday that Tillerson's attendance to chair the meeting shows that "the Arctic is a priority for him and the new administration." And the meeting would also "bring the world's attention to the strong and generous people who live in the Arctic, whose culture and way of life is a priority in any discussion on the future of the Arctic," he said.