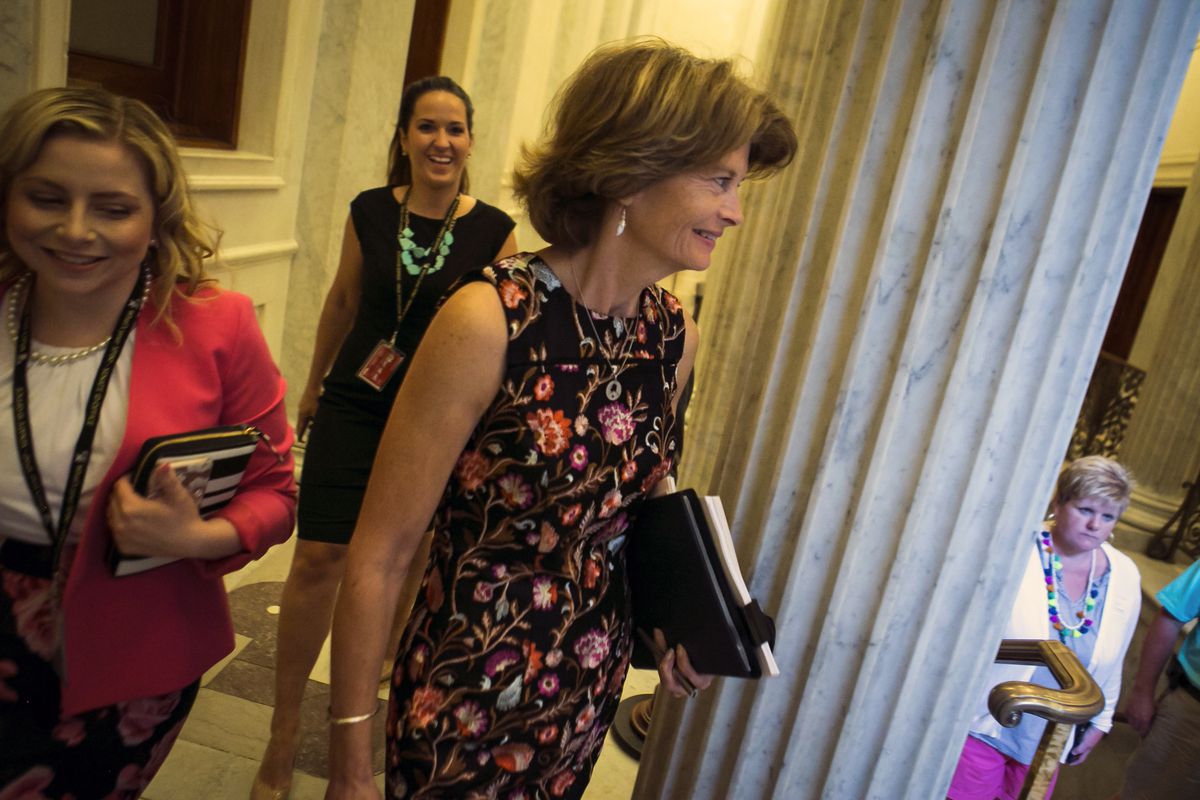 WASHINGTON — The latest iteration of the Senate Republicans' health care legislation includes "carve-out" funding for Alaska's high-cost individual insurance market, but it's not clear if that will be enough to draw "yes" votes from Alaska's two Republican senators.

Alaska Sen. Dan Sullivan said Thursday that he and Sen. Lisa Murkowski had worked for months to secure the funding, tied to Alaska's status as having far and away the highest premium costs in the nation. Nevertheless, neither was ready to say Thursday if the new draft of the so-called Better Care Reconciliation Act (BCRA) would win their support in a vote that Majority Leader Mitch McConnell has said will occur next week.

Sullivan said he's not making any comment on whether he'll vote for a motion to proceed (the procedural step before taking a vote on the bill) until he fully understands the bill. That's "what I think Alaskans want me to do, which is read it, dig through it, understand it, raise questions with my team or others if I don't understand it," he said.

Various media outlets were giving the provision nicknames soon after McConnell introduced the legislation Thursday in a private meeting with Republican senators: "Polar payout" and "Kodiak Kickback" were two offerings.

Alaska's add-on gives the state a guaranteed minimum 1 percent of two pots of funding included in the bill — short-term funding and a longer-term "innovation" grant.

The longer-term funding includes $182 billion to help states stabilize individual insurance markets through 2026 — $70 billion more than the first draft of the bill. There's a line-item that carves out, or sets aside, 1 percent of the funding for states with premiums 75 percent higher than the national average. There's just one state that meets that test: Alaska.

The short-term assistance fund will offer states $50 billion from 2018 to 2021. That means another $500 million for Alaska over that period, with the 1 percent clause.

"One percent doesn't sound like a lot, but 1 percent of a multibillion-dollar fund could be very helpful for Alaska," Sullivan said.

That clause does have a limit though: If the costs of Alaska's premiums drop below the 75 percent marker — even just to 74 percent higher than the national average — then the state isn't entitled to a minimum 1 percent.

"If our premiums come down below that number, we'll still get funding," Sullivan said. Though he still needed to read through the language, he said, his understanding was that gave the administrator of the Centers for Medicare and Medicaid Services "a lot of flexibility and authority to help states like ours."

The new grant funding offered under the bill would be in addition to Affordable Care Act funding that the federal government granted Alaska earlier this week.

The state's "reinsurance" program will use $48 million in federal funding next year (and more in the years following) to pay insurance companies for high-cost treatments from a list of 33 ailments. As a result, the insurance companies can keep from passing on those costs to the small pool of individuals buying insurance on the exchange, tamping down the otherwise steep rise in health insurance premiums.

The bill also includes $45 billion over 10 years in funding directed at the nation's opioid crisis, which Sullivan said he was pleased to see.

Sullivan said he was encouraged by the funding, and expressed a passion for federal aid in dealing with opioid addiction.

"If the Ebola virus ripped through the United States last year and killed 52,000 people, you would have a lot of money focused on it," he said.

The senator also lauded the structure of the $45 billion in grant funds as "broad-based" to deal with a variety of addiction and mental health issues. "It gives the state a lot of discretion on how to use it, not necessarily tying it to Medicaid expansion," he said. "We want people to be able to move up and out" of that bracket while still receiving needed treatment, he said. "People in addiction need long-term recovery that's not necessarily tied to where they are in the Medicaid eligibility."

The bill would also make it easier for insurers to sell lower-quality, lower-cost health insurance plans. Some lawmakers have raised concern that the provision, based off of an amendment crafted by Sen. Ted Cruz, R-Texas, could undermine protections for people with pre-existing conditions.

The bill reinstates a tax provision that both Sullivan and Murkowski said they wanted to see in the bill. The Affordable Care Act is in part funded by a 3.8 percent tax on investment income for people making more than $250,000 a year. The original draft Senate bill dropped that tax.

The new draft keeps the tax in place, which Murkowski and Sullivan both said they favor.

Both Murkowski and Sullivan have raised concerns about what the lowering of subsidies could mean for their constituents. Reviews of the House-passed bill and the earlier iteration out of the Senate found that Alaska would face disproportionate impacts compared to other states.

It was not clear under an early analysis how the lower subsidies would impact Alaskans given the new funding options designed to lower premium costs.

Murkowski has been particularly concerned about cuts to Medicaid. Earlier in the week she said she'd prefer to see Congress handle a revamping of Medicaid spending separate from the issues of Obamacare.

A quarter of Alaskans receive health care funded by Medicaid. The Indian Health Service bills through Medicaid, and about 40 percent of Alaska's Medicaid population, consequently, consists of Alaska Natives who would not be subject to the spending caps in the bill.

Medicaid remains a sticking point for Sullivan too, he said.

"I need to dig into the issue of Medicaid sustainability … I haven't gotten through it … and it concerns a lot of people back home," Sullivan said.

Both of Alaska's senators joined a small group of on-the-fence Republican senators from states that expanded Medicaid in a private afternoon meeting with Senate Majority Leader McConnell and Seema Verma, the administrator of the Centers for Medicare and Medicaid Services.

As the new bill hit the halls of Congress Thursday afternoon, reporters jockeyed to grab the reaction of a handful of senators who are known to be on the fence. Murkowski, with a keen knowledge of congressional back hallways and senator-only exits, eluded most.

Several weeks ago, Murkowski said she wasn't sure an Alaska carve-out would swing her vote.

"Think about it: If you had subsidy changes that only affect Alaska, but don't do anything with regards to the impact of Medicaid cuts, I don't see how that can help the balance here," she said.

McConnell can only lose two Republican votes and still pass the bill, with a tie-breaking vote from Vice President Mike Pence. That's made difficult by competing priorities from the right and left of the party — hard-liners who want a full repeal of the Affordable Care Act and major limits on spending, and moderates like Murkowski who want to preserve Medicaid expansion in their states.