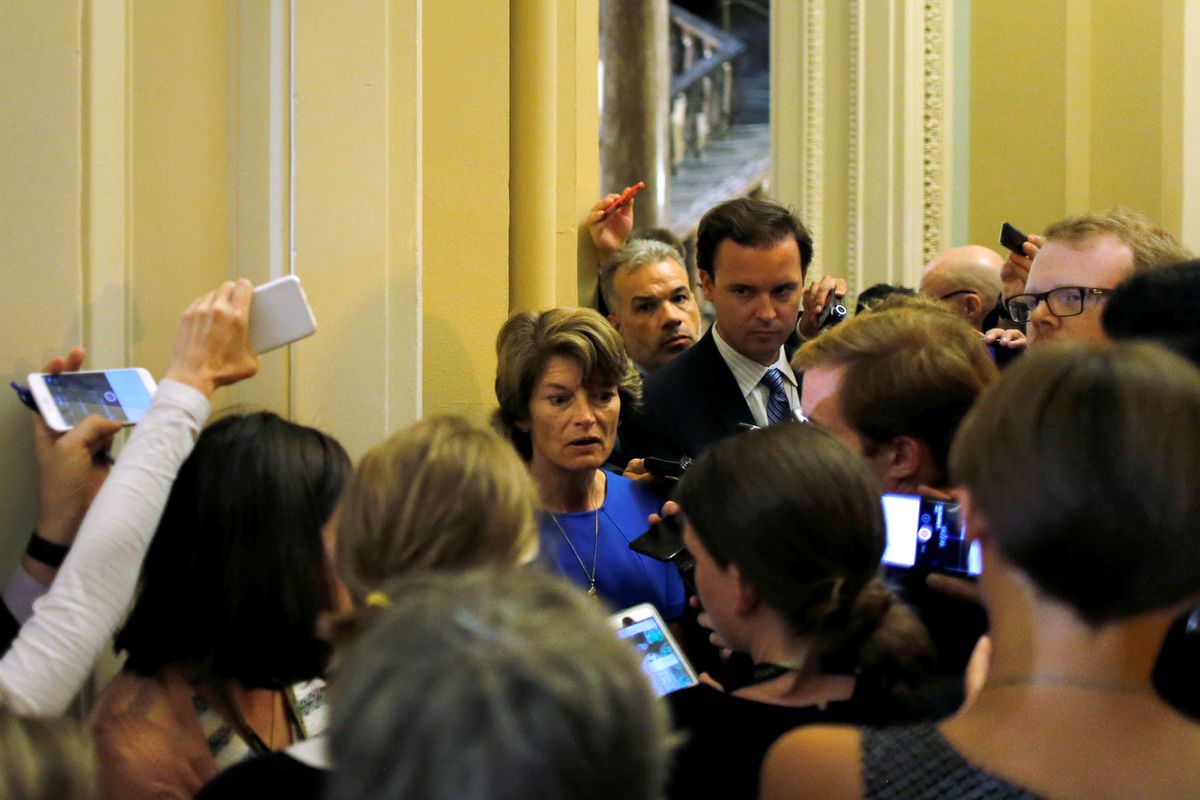 Alaska U.S. Sen. Lisa Murkowski speaks with reporters about health care legislation outside the Senate floor at the U.S. Capitol in Washington on July 18, 2017. REUTERS/Jonathan Ernst

Alaska U.S. Sen. Lisa Murkowski speaks with reporters about health care legislation outside the Senate floor at the U.S. Capitol in Washington on July 18, 2017. REUTERS/Jonathan Ernst

WASHINGTON — Alaska's Republican U.S. senators are not ready to give up on repealing and replacing the Affordable Care Act, though they have differing viewpoints about how to get there amid a failing process in Congress.

Alaska's Republican Sens. Lisa Murkowski and Dan Sullivan both expressed disappointment with crumbling negotiations over health care Tuesday, after the latest defections made it clear the Senate's draft bill would not pass as it was, this week or next.

But they parted ways in their plans forward.

Murkowski called for Republicans to start over, run the bill through an open and bipartisan committee process and leave Medicaid reform at a later date. Sullivan urged his Republican colleagues to continue negotiating among themselves on the draft that was on the table.

And the pair disagreed on their support for a plan to push the Senate into the process by voting to repeal the Affordable Care Act later this week.

Murkowski became a key figure in Washington on Tuesday when she was the third lawmaker to announce that she would not support a vote to repeal the Affordable Care Act without "replacement" legislation lined up.

Republican Sens. Shelley Moore Capito of West Virginia and Susan Collins of Maine had already staked out their positions Tuesday when Murkowski left an energy committee hearing and shared her opposition with a few reporters waiting in the hallway, and then again when mobbed by some of the dozens waiting in the Capitol building, where she arrived for the Senate's weekly Republican policy lunch.

['It's an insane process': How the health-care bill failed]

Murkowski sat down with Alaska-focused reporters in her office later in the day.

There, she said she didn't know at the time that she had just become the deciding "no" vote.

"I mean obviously I can count – I know that Sen. McCain is not here this week," she said. "But I wasn't counting or calculating … I did not coordinate" with Collins and Capito, she said.

Murkowski immediately heard opposition from conservative groups who charged her with flip-flopping on her 2015 vote.

"In 2015, 48 Senate Republicans who are still serving today including Shelley Moore Capito and Lisa Murkowski had no problem passing legislation that repealed the guts of Obamacare," said Americans for Limited Government President Rick Manning.

Neither Murkowski nor Sullivan want to see negotiations end, they said. Both decried the idea of getting a vote behind them, or moving past health care reform without a successful bill.

But Senate GOP plans veered off course Monday night when two conservative Republicans announced they would not support legislation crafted by Senate Majority Leader Mitch McConnell, R-Ky., dropping the vote tally below the 50 votes needed to pass the bill. (Vice President Mike Pence is available to act as a tiebreaker.)

The process has been driven through budget reconciliation legislation, which allows Republicans to avoid a filibuster effort and pass legislation with only 51 votes, rather than 60.

The budget reconciliation rules do, however, limit the scope of repeal to budget-and tax-related issues, complicating efforts for a "full" repeal of the law.

McConnell said that instead, he would hold a vote on House legislation to repeal the Affordable Care Act without any replacement mechanism. That would undo Medicaid expansion and remove subsidies that make insurance affordable for more than 80 percent of Alaskans who buy plans on the state's exchange.

The changes wouldn't take effect immediately, so in theory the Senate would have some time to come up with a "replace" or "repair" plan.

The Senate voted on and passed that same legislation in December 2015, but it was vetoed by President Barack Obama. Murkowski and Sullivan both voted in favor of the bill then.

But only Sullivan is willing to vote for it again.

"That gives us two years to find a solution," Sullivan said. "As a candidate I repeatedly made that commitment" to repeal the Affordable Care Act, he said. "I've worked really hard to keep the promises I made on the campaign trail. And I voted for this in 2015 already."

"I'm concerned that if we just move forward with just a straight repeal with the promise that we'll get to it in two years, 'trust us on this,' I think that that adds just greater uncertainty into an area and a market that is already chaotic, certainly in the individual market," Murkowski said.

"The facts on the ground have changed since 2015," Murkowski said, arguing that the status of the state's individual exchange has become more dire in the last year and a half.

Republicans also need to recognize "that there were some things within the ACA that we liked, and that we want to continue," Murkowski said.

"So I look to where we were in 2015 to where Alaska is right now and a straight-out repeal with nothing to provide a level of certainty to the Alaskans that are so concerned … I don't think that that is an acceptable answer that I can provide to them," Murkowski said.

At the Senate GOP policy meeting Tuesday afternoon, both Murkowski and Sullivan said they spoke up among their colleagues. Murkowski made clear why she wasn't willing to vote for a repeal without a replacement plan. Sullivan offered a plea for continued negotiations.

In separate sit-downs with reporters Tuesday afternoon, both Murkowski and Sullivan said they were still holding out hope for further negotiations.

Health care is both intensely personal and unendingly complicated, Murkowski said. "And so coming to a consensus has been hard, but I don't think it's impossible."

Murkowski wants to go through the committee process. (It's worth mentioning that she sits on a committee that manages health care and would likely get a more solid hand in negotiations that way.)

She suggested using parts of the current bill, as well as other bill language crafted by moderate Republican Sens. Lindsey Graham of South Carolina, Bill Cassidy of Louisiana and Collins of Maine.

"But let's move it through a committee process and let's see what we can't do, and do it in a way that builds some trust from folks that are looking at this process from the outside," Murkowski said.

"But I don't think it's so complicated that we cannot address again the urgency and that's the situation in the individual market right now," Murkowski said.

Over the weekend, Sullivan said he read through the draft bill and was heartened about many provisions related to the individual markets, and continued negotiating on Medicaid funding.

Sullivan noted a set-aside to help with Alaska's high-cost premiums, an $8 billion pilot project for home and community-based services for rural states, funding for community health centers and opioid addiction treatment, as well as provisions designed to protect Native health services and funding.

And "this weekend I was working with the vice president and (Centers for Medicare and Medicaid Services Administrator) Seema Verma and a number of senators" on another approach to help provide funding to states' Medicaid expansion populations.

"And then in addition to that, I was confident that if the Senate bill, the draft, got to the floor, there was another provision I'd been working on for months that would help to address some of the equity and the sustainability issues in the Medicaid program," Sullivan said.

Sullivan said he was frustrated — with senators, with the process, with the idea that anyone would be willing to walk away from the negotiating table after so much work toward a solution for the nation's health care problems.

Having a few senators say they're not willing to vote to proceed to the floor on the bill — "that's not fatal," Sullivan said. "You can just continue to work."

While Sullivan has his own plans for shoring up Medicaid expansion, Murkowski argued that the Senate should separate the process entirely — deal with the exchanges and individual insurance, and manage Medicaid reform later.

"Let's focus on the individual market now and where we are … and the urgency to address that," she said. "I think if we were to do that, and again, to go through a committee process, I think that you can make that happen. I think you've got good people that are willing and ready to go," she said.

But Murkowski's "Medicaid later" option isn't getting much traction.

"I'm frustrated, because I think we're close to a product that will work for the country, keep promises and work for Alaska. And I don't want to give up trying," Sullivan said.