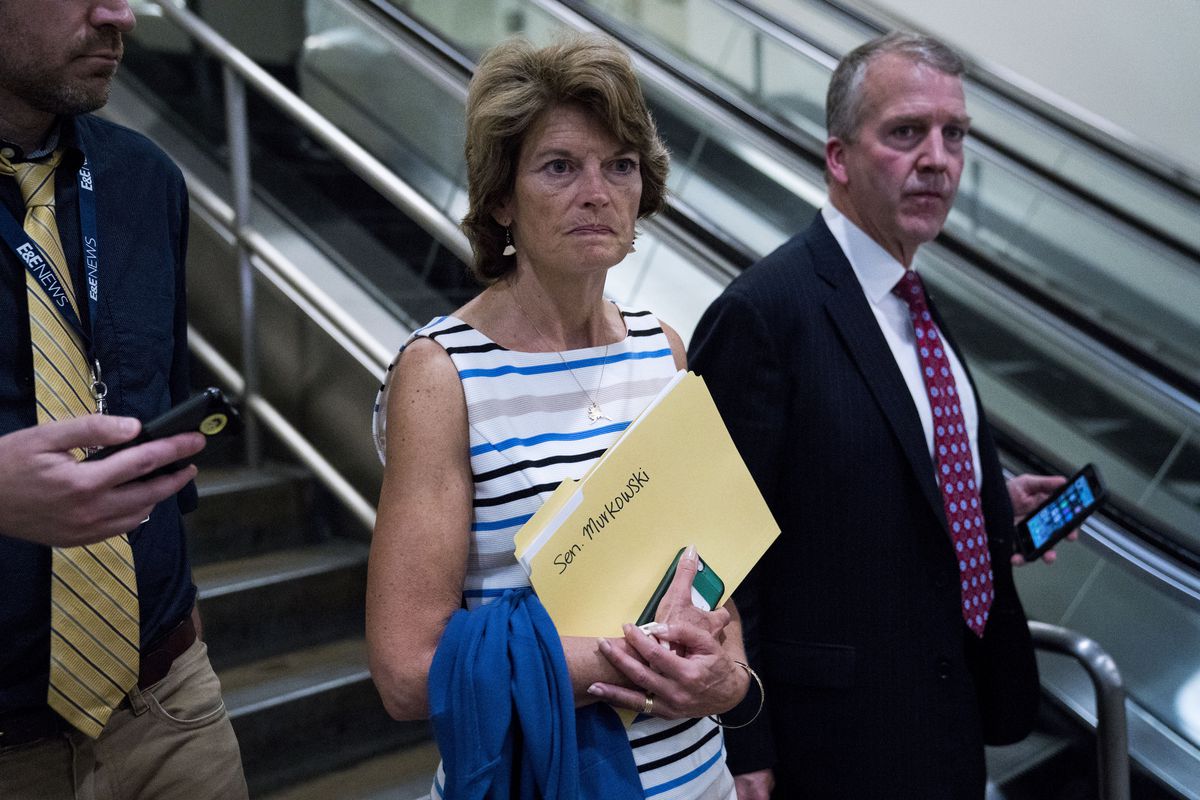 Sens. Lisa Murkowski and Dan Sullivan after they and other senators returned from a meeting with President Donald Trump regarding health care legislation, on Capitol Hill in Washington, July 19, 2017.  (Doug Mills/The New York Times)

Sens. Lisa Murkowski and Dan Sullivan after they and other senators returned from a meeting with President Donald Trump regarding health care legislation, on Capitol Hill in Washington, July 19, 2017.  (Doug Mills/The New York Times)

WASHINGTON — If Congress were to repeal portions of the Affordable Care Act supporting the individual market and Medicaid expansion, roughly 54,000 Alaskans would be without health coverage within two years, according to a Congressional Budget Office analysis of the bill.

The nonpartisan CBO only performed a national, macro-economic analysis of the bill. But a likely scenario — a crash of Alaska's individual market and elimination of Medicaid expansion — is not difficult to estimate at the state level.

To be sure, some lawmakers, including Alaska Republican Sen. Dan Sullivan and Alaska Rep. Don Young, don't want the negotiations to end with a repeal vote. Both Sullivan and Young have advocated for repealing the ACA and using the two-year timeline before most measures take effect to negotiate a new plan.

That has not always been a workable path for Congress. In 2011, Congress passed and President Barack Obama signed a deadline-oriented law that required blunt budget cuts if a "super committee" was not able to reach an agreement to decrease the deficit by $1.2 trillion over 10 years. They did not ever reach an agreement.

As of Wednesday afternoon, Senate Majority Leader Mitch McConnell was still considering a vote next week on an already-passed House bill to repeal much of the ACA without replacing it.

Congress passed the same bill in 2015, but Obama vetoed it. Murkowski and Sullivan both voted in favor of the bill in 2015.

Nevertheless, Murkowski remained a "no" vote Wednesday, along with Republican colleagues Shelley Moore Capito of West Virginia, Susan Collins of Maine and Rob Portman of Ohio. Unless several senators change their votes, there will not be enough "yes" votes to begin debate on the bill.

On Wednesday, the CBO released an updated version of its 2015 "score" of the bill detailing its likely economic impact.

The presumption is simply what the bill would do, precluding, of course, any potential follow-up legislation.

There are other measures that would have other impacts on coverage and premiums, but eliminating the requirement that people buy insurance (or face a tax penalty) and cutting tax subsidies for individual insurance and funding for Medicaid expansion would have the broadest impact.

The bill would keep many regulations set by the ACA in place. Insurance companies would still not be allowed to deny coverage for people with pre-existing conditions or vary premiums "on the basis of age, tobacco use, and geographic location," the report said.

The bill would also eliminate Medicaid expansion, which would be a fairly straightforward loss for Alaska. A quarter of Alaskans — 184,000 — are covered by Medicaid, but the expansion population is much smaller — 34,739 adults. Those people would likely lose coverage under the bill.

Nationally, CBO estimated that 17 million people would become uninsured by 2018 — many because they were no longer beholden to the mandate to buy insurance.

CBO estimated that in 2018, premium prices would rise on average about 25 percent in individual markets, enrollment would decline and be made up of a less-healthy group of people. By 2020, prices would be about 50 percent higher, and by 2026, they would double, according to CBO. At that point, CBO estimated that 32 million more Americans would be without health insurance, largely because of the high cost.

In Alaska, the individual market is relatively small — 19,145 people in 2017. Most Alaskans purchasing health coverage on the individual market — 88 percent — do so with the help of tax subsidy payments. Without those subsidies, individual insurance would often cost thousands of dollars a month — unattainable for most.

Alaska has a reinsurance program designed to keep premiums down, and was recently granted a waiver by the federal government for some of its spending on high-cost medical bills. That funding — $48 million the first year — appears unlikely to blunt the blow from a $153 million loss.

Aside from passing legislation, Trump has raised the option, on occasion, of cutting off subsidy payments on the administrative side — something that doesn't require congressional action.

Both Murkowski and Sullivan said they would not favor that approach.

"I've never been someone who says we should let the health system fail on its own," Sullivan said.

The "cost share subsidies I think are important to the marketplace everywhere and it is within the discretion of the administration to make those payments," Murkowski said. "The president has effectively made that decision on a monthly basis for the last several months," she said. "I do think if those cost-share subsidies are not continued, again, that just adds to greater uncertainty, which I don't think anyone welcomes."

Melanie Coon, a spokesperson for Premera, the only insurer remaining on Alaska's individual market, said that generally, the company advocates for subsidized access to care. The company's first priority is that customers "have certainty and security — knowing that their coverage will be available," she said.

"Almost 90 percent of people in Alaska are eligible for some kind of subsidy for their health care coverage … so this would have a large effect," Coon said.