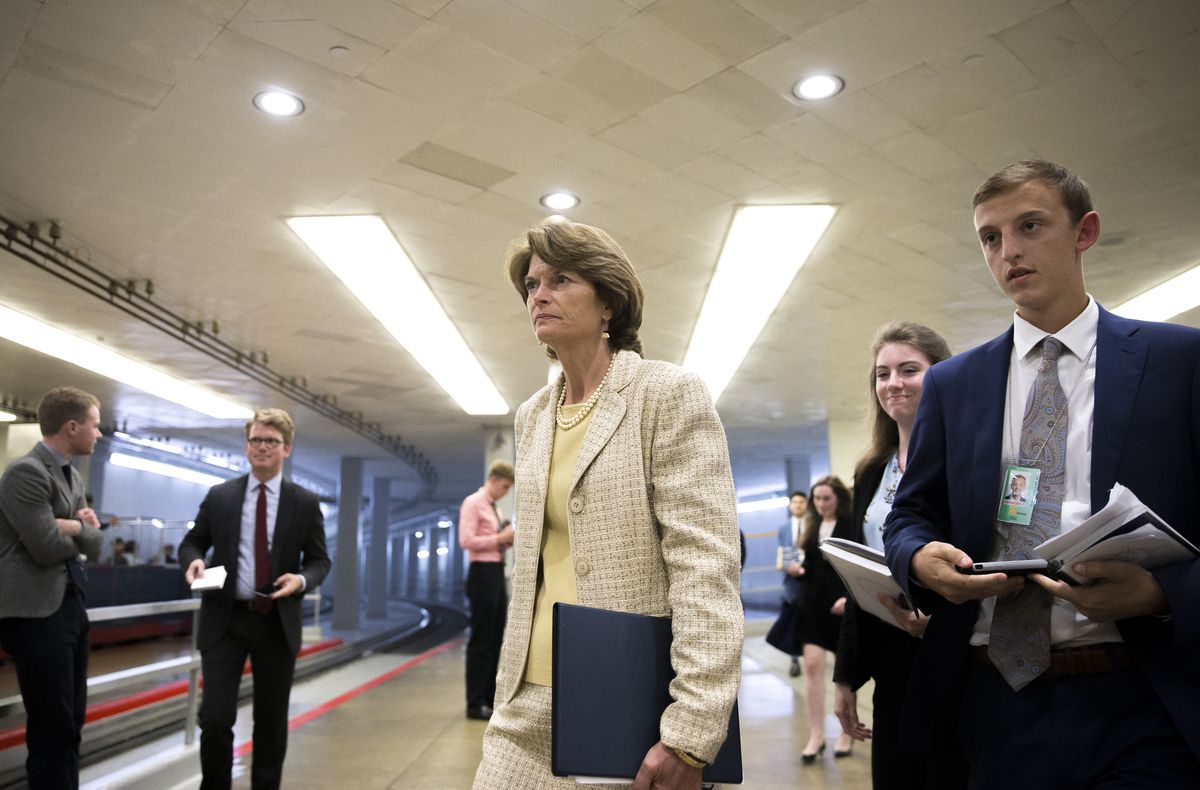 Sen. Lisa Murkowski, R-Alaska, was one of seven Republicans who on Wednesday rejected a measure repealing major parts of the Affordable Care Act without replacement; the 45-55 defeat signaled that a “clean repeal” bill cannot get through Congress. (Tom Brenner / The New York Times)

Sen. Lisa Murkowski, R-Alaska, was one of seven Republicans who on Wednesday rejected a measure repealing major parts of the Affordable Care Act without replacement; the 45-55 defeat signaled that a “clean repeal” bill cannot get through Congress. (Tom Brenner / The New York Times)

In Alaska, Sen. Lisa Murkowski's rank-breaking votes against Republican efforts to repeal and replace the Affordable Care Act delighted progressives and Democrats while dismaying members of her own party, who accuse Murkowski of reneging on one of the party's central political promises.

But state GOP leaders, in interviews on Saturday, tempered criticism with hope that Murkowski, who isn't up for re-election until 2022, will keep working toward repeal.

Josh Walton, the party's executive director, said he fielded nonstop calls Thursday and Friday, forwarded from the party office to his cellphone. People who couldn't get through to Murkowski's office had called the state GOP headquarters instead.

Walton said he had talked on the phone to roughly 40 or 50 people, mostly Alaskans, by Saturday afternoon. He said he hadn't yet tallied voicemails or missed calls.

Nearly all the callers were disappointed or angry, Walton said.

"The repeal of 'Obamacare' is something Republicans have wanted, across the board, for a long time," Walton said. "To see a chance for it to happen and then have that chance taken away … I think that's what's really making a number of folks mad."

Murkowski has said the Republican repeal-and-replace legislation, crafted in secret outside of the Senate committee process, prioritized party votes over sound policy. She joined fellow Republicans Susan Collins of Maine and John McCain of Arizona to defeat the bill early Friday morning.

Saying he was speaking for himself, Walton said he respects Murkowski and her work in the Senate on energy and resources, which are closely tied to the health of Alaska's economy. He suggested Murkowski could be redeemed if she casts a repeal vote before her term ends.

"However disappointed I might be in that particular vote, all will be forgiven as long as we end up getting across the finish line," Walton said.

Tuckerman Babcock, the chairman of the Alaska Republican Party, noted that repealing "Obamacare" has been integral to Republican campaigns nationally since 2010. That includes Murkowski's most recent re-election campaign last year, Babcock said. He said Murkowski's recent health care votes have led to a sense of betrayal.

Some of Murkowski's Republican allies jumped to her defense. Andrew Halcro, a moderate Republican from Anchorage who served with Murkowski in the Alaska House of Representatives, said he was frustrated by what he called the GOP's "you versus us" mentality.

"This visceral reaction because she voted to say, 'I have issues with (the bill), the state has issues with it, let's take a deep breath and create good policy' … when I see Republicans railing against smart, sensible action, that's when I have to shake my head," Halcro said.

Marc Hellenthal, a longtime Alaska political consultant and pollster who has often worked for Republicans, noted that Murkowski has been controversial within the party since the 2010 primary, when she won an unprecedented write-in campaign against Joe Miller.

Notably, she's gone against the party platform on the emotionally charged issue of abortion, Hellenthal said. Hellenthal said Murkowski's health care vote should not have been too shocking to Republicans.

He added that time was on the senator's side.

"I don't think (the vote) really, by 2022, hurts her at all, any more than she was hurt before she voted," Hellenthal said.