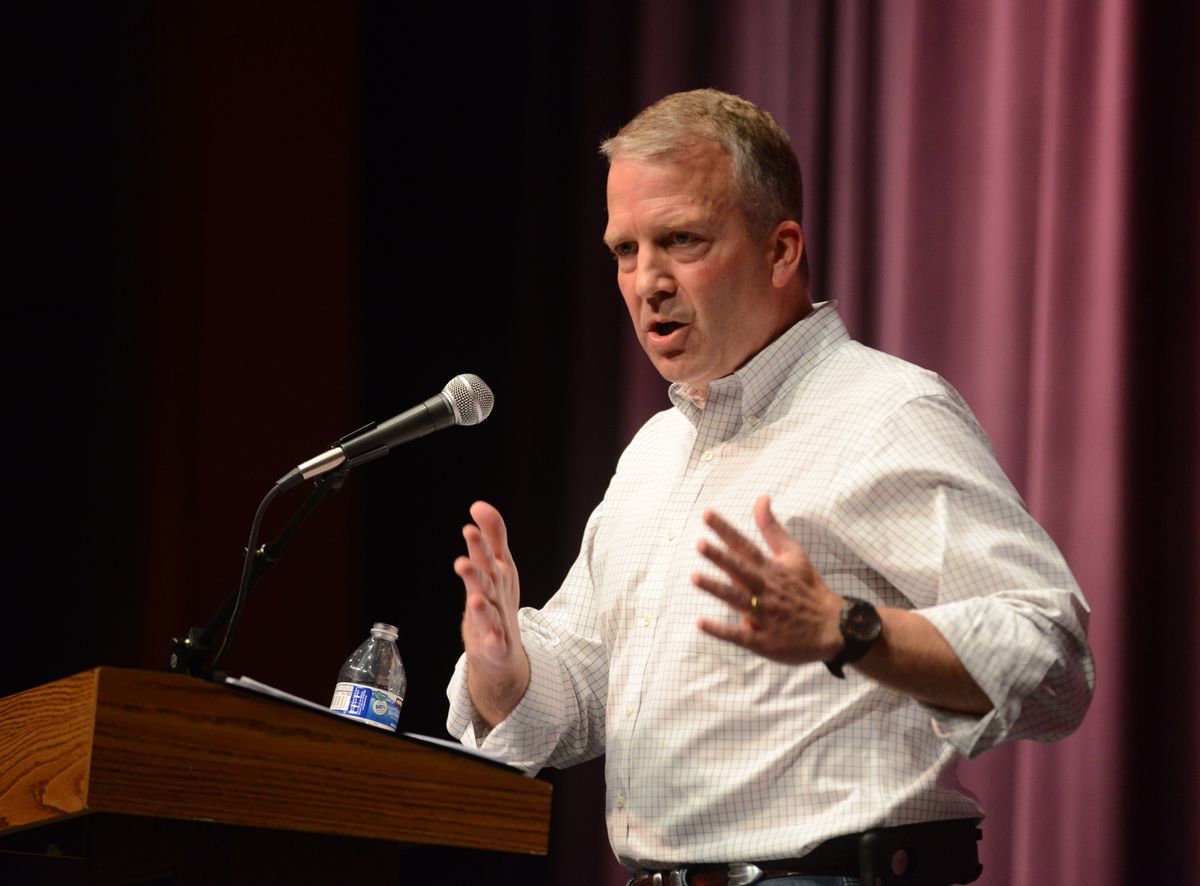 WASHINGTON — Sen. Dan Sullivan, R-Alaska, has been talking about combating domestic violence since he arrived in Washington, D.C., in 2015.

For the most part, his efforts have gained bipartisan traction. He often teams up with female Democratic lawmakers. But he thinks the issue should be nonpartisan, and certainly of interest to the many men in Congress. Sullivan, who was active in launching Alaska's "Choose Respect" campaign against domestic violence, said he'd hoped to bring some of that work with him to the Senate.

"And I will tell you that I've gotten up in front of my (Republican) conference on more than one occasion touting the importance of these bills … sometimes you get the feeling when you're here that these issues are viewed as women's issues, and maybe even Democratic women's issues," Sullivan said. "And I've tried to make the case that these should not have any party affiliation. And if anybody should care about them, it should be the men, because the men are the ones who perpetrate the vast, vast majority of these heinous crimes, not only in the state but across the country," he said.

Last week, the Senate passed Sullivan's "POWER Act," a bill aimed at forming a nationwide volunteer force of lawyers helping women who have experienced domestic violence. The legislation follows the lead of a program he launched in Alaska while he was the state's attorney general.

The bill requires that each U.S. attorney hold at least one event annually to connect local anti-violence groups and volunteer lawyer projects to set up pro bono legal services for victims. Each office would submit a report to the Justice Department, which would send a compiled report to Congress each year. The bill also has provisions aimed at specifically helping Native populations and people in Indian Country.

One of the most effective ways to get someone out of the cycle of a violent relationship is to get them a lawyer, Sullivan said. That "empowering element of having the law on your side is viewed as very helpful," he said.

"The idea here is to create an army of lawyers, thousands of lawyers, across the country who would go do this," he said.

Alaska's other U.S. senator, Lisa Murkowski, co-sponsored the bill, along with senators from New Hampshire, West Virginia and Montana.

This is the second time the bill has passed the Senate. Sullivan successfully moved the bill through the Senate in 2015, but it was held up in the House. This year, he said, he hopes that a bipartisan group of lawmakers, including Alaska Republican Rep. Don Young and Massachusetts Democratic Rep. Joe Kennedy, can move it across the finish line.

In related efforts, Sullivan said he is working to ensure that federal funding remains strong for legal services groups that facilitate efforts to help victims of domestic assault.

Earlier this year, military officials discovered that a Facebook group called Marines United was acting as a repository for nude photos of female Marines, without their knowledge.

Sullivan and Warren's language would alter the Uniform Code of Military Justice to grant authority to prosecute members of the military for their behavior in such groups.

"You know some people are saying, 'Oh, that can be free speech, they're not on duty,' " Sullivan said. His response: "The hell it is free speech."

Sullivan said he had not personally experienced such behavior as a Marine, but he thinks that aggressive top-down leadership is how the military should address gender equality in units.

As a Marine, I’m disgusted by reports of female #Marines being degraded online. @SASCMajority held an important hearing on this perversion: pic.twitter.com/jy7UKhoTha

In 2015, a provision he authored was signed into law by President Barack Obama as a part of a larger bill for victims of human trafficking. It required the federal Justice Department to allow state prosecutors to charge people with federal crimes for violating a law against sex trafficking across state lines (the Mann Act). Sullivan had hoped it would allow for further prosecution of former Veco chief Bill Allen, but that did not happen.

Sullivan also sponsored a bill in 2015 aimed at preventing sexual assault against women on boats run by the National Oceanic and Atmospheric Administration. It was passed as an amendment to the fiscal year 2017 National Defense Authorization Act. The provision required NOAA to set procedures to discover and respond to sexual harassment and assault and institute safeguards and training to prevent incidents.

Sullivan said he was prompted to write the language after seeing news reports — one in particular from The Washington Post — about the difficulties faced by female scientists at sea.

Sullivan said that the issue of domestic violence is close to his heart because it is such a major problem in Alaska; in recent years, Alaska's rate of sexual assault was three times the national average, according to federal crime statistics. He spoke of meeting women during his time as the state's attorney general who told him stories that blew his mind. And Sullivan pointed to two of his young daughters, who were visiting in Washington, D.C., before the start of August recess and sat nearby during a recent interview.

The senator expressed pride in the public service announcements that were central to the campaign. "Real Alaska men choose respect — you don't beat your girlfriend or abuse your wife. That's not a real man who does that," he said. He felt certain it made a difference in schools across the state.

While Sullivan said he would like to see more action out of Senate Republicans, he also makes sure he reaches out to Democrats likely to follow his message, he said. Last week, he met with new California Sen. Kamala Harris, a Democrat. "She's a former AG, so she gets it," he said. He also mentioned work with Sen. Kirsten Gillibrand, D-N.Y., and Warren.