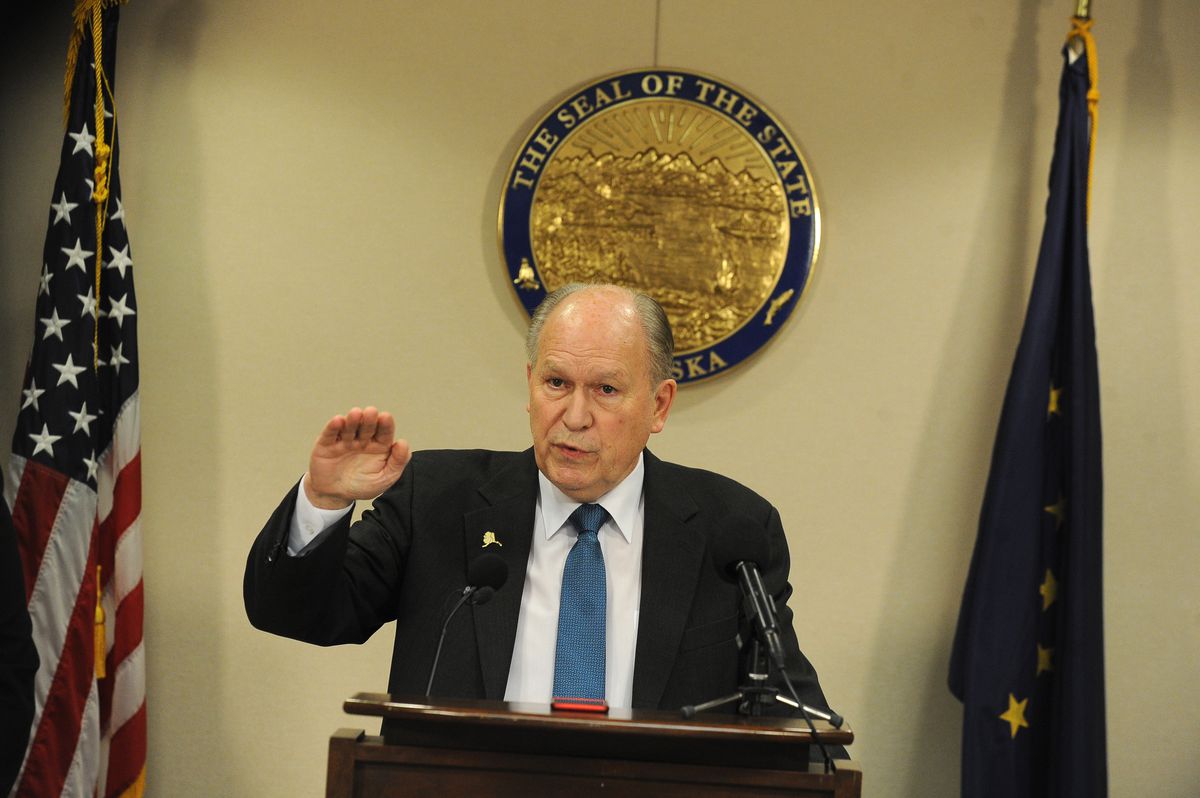 Gov. Bill Walker holds a press conference on the release of the administration’s fiscal year 2019 budget in the Atwood Building in downtown Anchorage on Friday, Dec. 15, 2017. (Bob Hallinen / ADN)

Gov. Bill Walker holds a press conference on the release of the administration’s fiscal year 2019 budget in the Atwood Building in downtown Anchorage on Friday, Dec. 15, 2017. (Bob Hallinen / ADN)

Gov. Bill Walker on Friday put forth an ambitious budget proposal that would, if approved by lawmakers, for the first time use Alaska Permanent Fund earnings for the operations of state government.

As a side measure, the governor is proposing a modified 1.5 percent payroll tax, but not to fund general government. It would be designated for a specific purpose: taking care of overdue repairs and maintenance on schools, public buildings, Alaska's Pioneer Homes, community housing projects and harbors, including the expensive Port of Anchorage remake. And it would expire after three years.

"It's not growing government," Walker said Friday afternoon. "This is about fixing Alaska."

He also wants to borrow money to pay off hundreds of millions in tax credits owed to oil exploration companies that otherwise would be paid over several years. And he wants to reform what he called a broken budgeting system.

The proposal estimates the amount of the Permanent Fund dividend paid to Alaskans will be $1,216, far less than it would be if the formula followed before Walker were still in place.

The Republican-led state Senate has opposed any broad-based tax. Sen. Peter Micciche, R-Soldotna and the Senate majority leader, said the chamber would evaluate the governor's proposal and called elements of it good, including a push for a biennial budget that would guide spending for two years.

But even a limited tax will have a rough road in the Senate, where leaders believe the state's budget crisis will ease by 2023 or 2024, provided government is held in check, he said.

"We're still going to struggle with any kind of tax at this point to fund a temporary dip," Micciche said.

In the state House, led by a coalition of Democrats and Republicans, the budget proposal met with initial favor because it doesn't cut money for public schools and puts new money into public safety. But the payroll tax will need a close review, House leaders said.

In all, the proposed budget for the 12 months starting July 1 totals $4.7 billion in state spending, a drop of 1.7 percent from the current year budget of $4.8 billion.

The governor's proposal is a starting point for work in the Legislature.

The budget is often the last significant piece of legislation passed each session and is used to bargain for other priorities.

That's a bad system, the governor said. State employees and teachers get pink notices warning they might not have a job. The Alaska Marine Highway System cannot publish a ferry schedule.

"It's a terrible way to run a state," Walker said.

He is proposing a biennial budget that would guide spending for two years. Also if lawmakers don't pass a budget in their regular 90-day session, they shouldn't be paid or get expense checks until they do so, he said. The same goes for him, he said, if he doesn't propose a budget by Dec. 15.

State revenues have fallen billions of dollars short of state spending in recent years because of declining oil production and lower oil prices, forcing a Legislature at a standstill on taxes to spend from savings accounts.

Walker's budget proposal relies on $1.9 billion in Permanent Fund earnings — a source that has never been used to fund government operations before. It also draws $400 million from the state's nearly drained main savings account, the Constitutional Budget Reserve, and a smaller amount from another savings account to fill a gap of about $2.5 billion. In past years, the Constitutional Budget Reserve has been used, but there's not enough left in it to fill the entire budget gap. Under Walker's plan, the savings account will have $1.7 billion at the end of the coming budget year.

Walker also is proposing to pay off tax credits owed to oil exploration companies by issuing bonds. The credits, under a program that has since been extinguished, were offered to oil companies as an incentive to explore new areas. In this tax credit program, the state has to pay out money, not just give a break on taxes owed. About $900 million will be eventually owed, said Sheldon Fisher, state revenue commissioner. Another $100 million in credits is expected to be sold to oil companies that owe taxes, to give them a break, he said.

The Walker plan would allow oil companies to be paid for the credits all at once instead over several years, and the state would get a discount on what it owes, Fisher said.

Unlike earlier tax measures that met with sharp resistance in the state Senate, the proposed payroll tax is time-limited and and purpose-limited, Walker stressed.

The payroll tax would generate $800 million over three years as a side revenue stream, outside the $4.7 billion main budget, according to state officials. Counting federal and local matches, $1.4 billion would be available for maintenance and upgrades.

The Walker administration is pitching the tax as way to lift Alaska out of recession by creating an estimated 1,000 jobs, including in rural Alaska, for contractors, engineers and others involved in design and repair of basic infrastructure. His team calls it the "Alaska economic recovery plan," and it would require legislation before it is enacted.

People who work in Alaska but don't live here also would pay the tax, accounting for about 15 percent of the total to the state, said Fisher, the revenue commissioner. Plus, the tax would be capped at $2,200, or two times the Permanent Fund dividend amount.

Alaska's unemployment rate of 7.2 percent is the highest in the nation, which Walker called unacceptable.

Spending for agency operations is slightly higher than the current budget because of a $34 million public safety initiative, a higher-than-expected prison population and growing Medicaid health care rolls, according to the governor's budget team.

But in measurable ways, Alaska's budget has shrunk, the Walker administration said. The capital budget is lower. There are 2,800 fewer state employees than there were three years ago. The proposed budget has 217 fewer budgeted positions than the current spending plan.

The Senate has pushed for reductions or at least a budget "as flat as possible for the next several years," said Micciche, who has printed out the Walker budget documents and intends to check the calculations.

"By my first look here, it looks like the administration may have gotten that message," the senator said. "We'll see if we can all come together in Juneau starting next month."