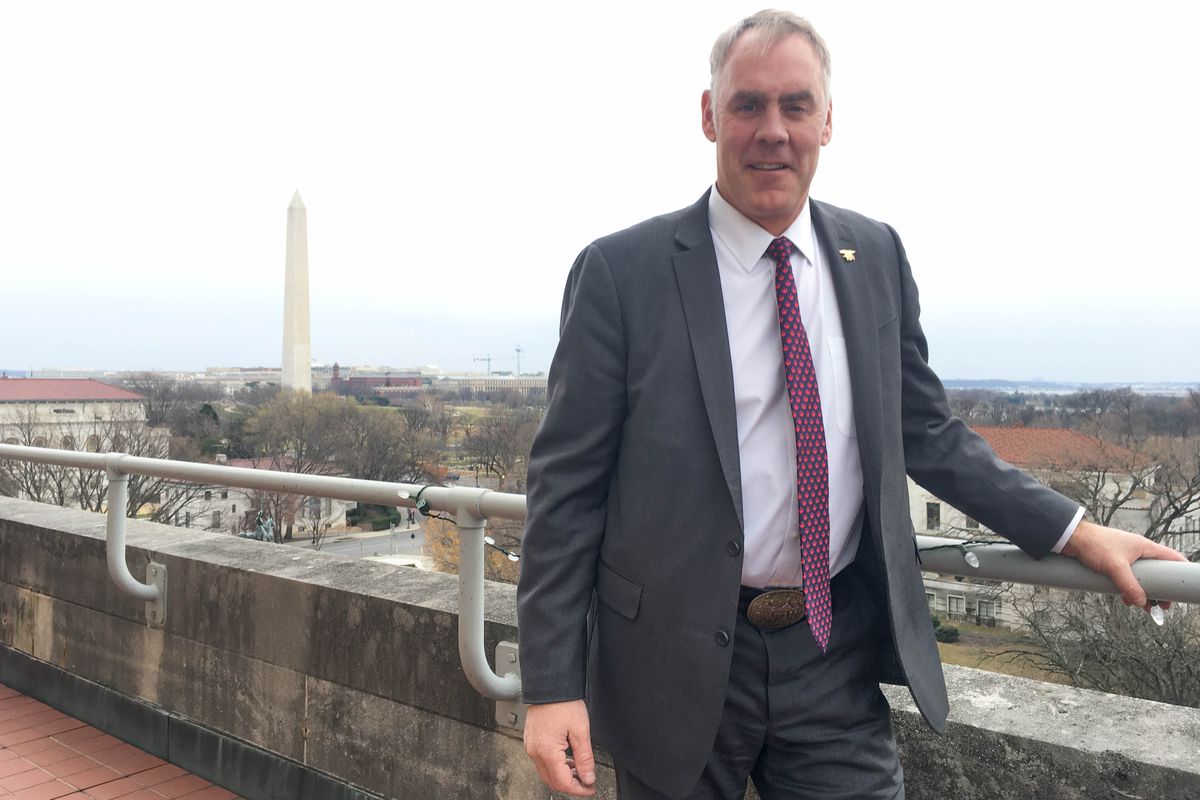 WASHINGTON — From this office overlooking the National Mall with its crackling fire and snarling stuffed brown bear, U.S. Interior Secretary Ryan Zinke is helping determine the fate of some Alaskans' most coveted projects — from oil drilling in the Arctic National Wildlife Refuge to the proposed road between the communities of King Cove and Cold Bay on the Alaska Peninsula.

In a 40-minute interview last week, Zinke laid out his views on Alaska issues and offered hints at how the Trump administration will press its priorities in the state, simultaneously pledging to reinvigorate fossil fuel production on federal lands and to promote conservation and recreation.

"I don't think it's a tradeoff. I've heard this argument before: 'Well, you can either do this or you can do this,' " Zinke said. "It's called multiple use."

Since the federal government owns more than half the land in Alaska, Zinke can be thought of as something like a landlord. The Interior Department oversees Alaska's national parks, guides onshore and offshore oil drilling on federal lands and in federal waters and, through its Bureau of Indian Affairs, is the federal government's liaison to Alaska Native tribal groups.

Earlier this year, on his first trip to Alaska, Zinke pledged to reverse Obama-era restrictions and reinvigorate the state's oil industry, drawing praise from political and industry leaders.

But that pledge has yet to be fully translated into concrete policy, leaving groups with a stake in Interior Department policy — from oil companies to conservation organizations — waiting to see just how Zinke proceeds on some of the state's most contentious federal issues.

A former Montana congressman, Navy SEAL and Boy Scout, Zinke reveres Teddy Roosevelt — there's a bust next to his fireplace and a portrait above. But Zinke describes his own battles as different from those faced by the Rough Rider.

That former president, Zinke said, fought to preserve public lands for public use, not "special interests" like timber barons. But today, Zinke's foes are conservation groups and companies like Patagonia, which sued Trump over the administration's move to shrink a pair of national monuments in Utah.

"Special interests now, in many cases, are those that want to keep you off the land — that want to make it wilderness and wilderness only and restrict the American public from using the land," Zinke said. "Not everyone can afford to spend five days hunting. So there's a lot of Americans that enjoy our public lands on the weekend, right? And that requires access. That requires roads, in many cases. There's a lot of Americans that are disabled — veterans that I know. They're not able to hike seven ranges in."

Zinke's wife, Lola, once lived in Anchorage, where she worked at the Lucky Wishbone restaurant. Ryan Zinke, meanwhile, said he did military exercises in Alaska in the 1980s, from Kodiak out to the western end of the Aleutian Islands.

He said there's "really about four issues" in Alaska — two of which are well known.

One is the proposed road that would run 30 miles between the villages of King Cove and Cold Bay, on the Alaska Peninsula. It's long been a priority of the state's Republican congressional delegation.

"King Cove, we're working on it," said Zinke, who brought up the project himself before a reporter could ask about it. "Everyone knows about it. King Cove is on the map."

King Cove residents say the road would give them easier access to Cold Bay's jet runway for medical evacuations. But conservation groups have fought the proposal because about half the route would run through the Izembek National Wildlife Refuge.

Zinke wouldn't specify whether the department's next step to advance the project would be announced soon, instead saying: "The winds are very favorable."

[Related: Can the isolated Alaska Peninsula town of King Cove get its road under the Trump administration?]

Zinke's other high-profile priority is boosting oil production on the North Slope.

[Related: 'A historic moment': How ANWR drilling was passed by Congress after decades of effort]

Zinke downplayed environmental concerns about drilling in the refuge, saying the proposal on the table is limited to the coastal plain, known as the 1002 area, which makes up some 8 percent of the refuge's area.

But development there is still years away, since oil infrastructure inside the refuge hasn't been built yet.

Near-term prospects for production are far better in the Indiana-sized National Petroleum Petroleum Reserve-Alaska, where the first project went online in 2015.

[Related: Conservation groups prep for battle over drilling in NPR-A]

Zinke has ordered a review of an Obama-era plan that placed about half the reserve off-limits to drilling. That plan also doubled the size of a protected area around Teshekpuk Lake, in the reserve's northeastern corner.

The lake, and nearby land, is key caribou habitat, and it's also visited by birds that come from all seven continents. But it's also close to new oil discoveries, sparking industry interest in the area — which in turn has prompted fears from environmentalists that the Trump administration could try to roll back protections there.

Zinke wouldn't directly address his department's plans for revisiting the reserve's management plan. But he acknowledged that "not everywhere" in NPR-A is appropriate for oil and gas production.

"The area is so large, people tend to paint it with this big brush — they paint it as if it's monolithic," Zinke said. He added: "There are lakes, there are sensitive areas where even though it resides in the petroleum reserve, it is not appropriate under the current technology to drill."

One solution to that problem, Zinke said, could be the use of technology that allows oil companies to drill horizontally.

Two other, lower-profile issues are also at the top of Zinke's Alaska agenda, he said.

One, he said, is the 2,800 Alaska Natives who missed out on applying for Native land allotments while serving in the Vietnam War era — a problem that's long been a focus for the state's congressional delegation.

[Related: Trump administration will be asked to resolve dust-up over Alaska land surveys]

The other has to do with surveys of land that's being transferred to the state by the federal government, dating back to when Alaska first became a state. About one-third of the 106 million acres that the Bureau of Land Management has been in the process of transferring was still unsurveyed as of last year, and state officials were feuding with the Obama administration over how to more quickly finish the job.

Zinke said the solution could be in drones — and in the two sides' willingness to agree on a method to use them.

"The accuracy is plus or minus a couple of centimeters," he said. "I don't think it will take a fleet, even though Alaska is enormously large."

Barack Obama visited Alaska as president in 2015, and his administration highlighted the plight of rural villages like Newtok and Shishmaref. Those places are facing threats of flooding and erosion amplified by rising sea levels and thawing permafrost, and critics have argued that Trump and Zinke are ignoring the problem.

[Related: With focus on hurricanes, erosion-threatened Alaska villages wonder if they'll get any help from Trump]

Asked about the federal government's role in helping to relocate some of the villages — which could cost hundreds of millions of dollars — Zinke said the new administration wants to respond to the desires of individual communities, rather than impose policies from the top down.

"There's a role because we represent the tribes and Native Alaskans. We're their advocate," he said. But, he added: "What the specific solution is, I don't think anyone knows at the moment."