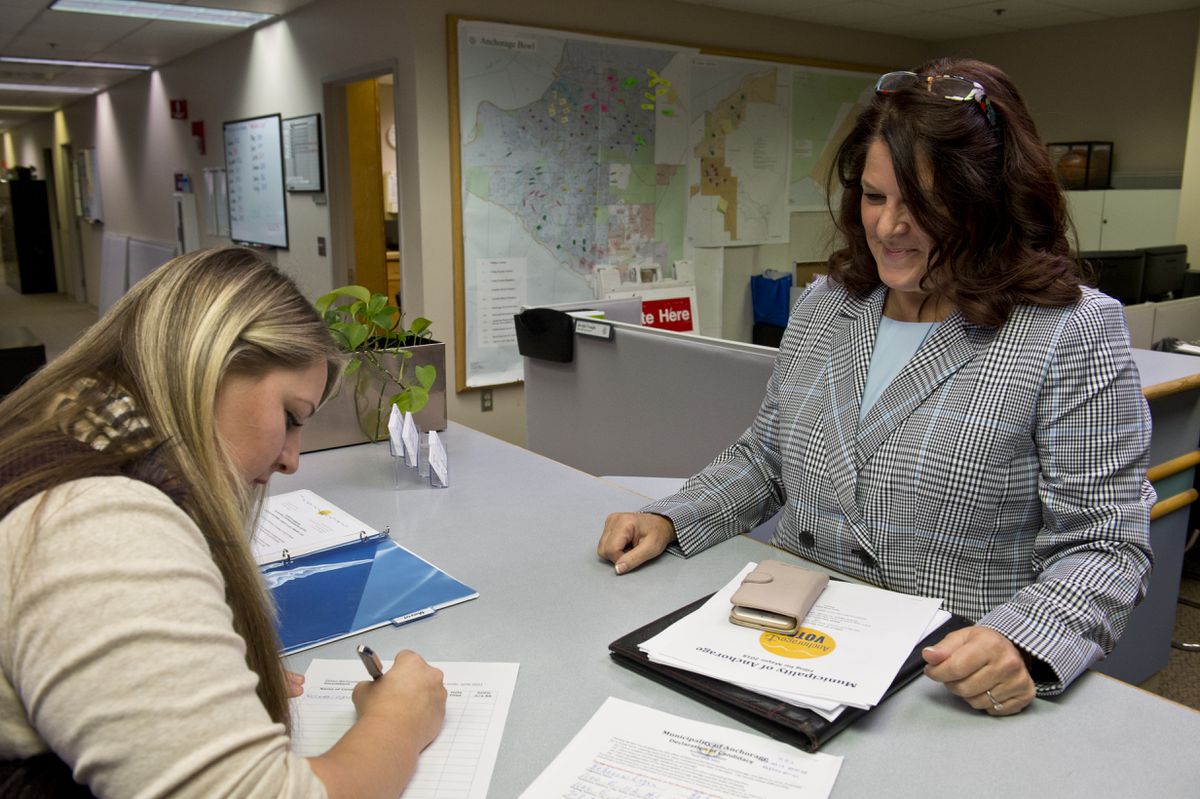 Rebecca Logan, right, filed her declaration of candidacy for mayor of Anchorage at City Hall on Friday. She’s assisted by Amy Solberg in the municipal clerk’s office. (Marc Lester / ADN)

Rebecca Logan, right, filed her declaration of candidacy for mayor of Anchorage at City Hall on Friday. She’s assisted by Amy Solberg in the municipal clerk’s office. (Marc Lester / ADN)

Rebecca Logan, longtime general manager of an Alaska oil, gas and mining industry group, filed to run for mayor of Anchorage on Friday.

Logan is currently the leading challenger to incumbent Mayor Ethan Berkowitz, who is running for re-election. She arrived at the city clerk's office just before 10 a.m. Friday to submit her candidate paperwork. Berkowitz, who is seeking a second term, filed his re-election paperwork about an hour later.

The city election is April 3.

"I want to be part of the solution," Logan said. "I know I have the skills and experience to really come in and lead and make some differences and changes in what we're doing here."

Logan said she's particularly concerned about crime and public safety, calling it her "No. 1 priority." She said she also wants to curb unemployment, taxes and the size of the city's budget. She said the city should do more to help small-business owners, fight shoplifting and vandalism and advocate for changes in state law to give the city more control over criminal penalties.

As the head of the Alaska Support Industry Alliance, a nonprofit trade association, Logan has testified before state legislative committees about oil taxes and other issues affecting the oil and gas industry. The group represents about 600 contractor businesses in the state's resource development industries, mainly oil, gas and mining.

Logan previously served as president of a builders and contractors association and owned restaurants in South Anchorage and Midtown.

The 54-year-old grew up in Wisconsin and studied English at the University of Oklahoma. She followed a college boyfriend to Alaska nearly three decades ago. It was supposed to be a short stay, she said, but she loved Alaska and never left.

A registered Republican, Logan already has the endorsement of the Alaska Republican Party, though city races are technically nonpartisan.

Logan said Friday she does not support Proposition 1, a ballot initiative measure that would roll back legal protections for transgender people by restricting bathroom and locker-room access to the sex on a person's birth certificate. Logan said such public policies should be crafted through discussion rather than ballot initiatives.

Berkowitz filed his election paperwork shortly before 11 a.m.. Standing in a parking lot outside City Hall a few minutes later, Berkowitz said he loves the job and his work isn't finished.

He said his administration has made "substantial progress" building up the Anchorage Police Department, stabilizing the local economy through the proposed sale of Municipal Light & Power, and cutting property taxes for homeowners. In a second term, Berkowitz said, he would keep focusing on public safety and homelessness while making Anchorage more self-sufficient.

Berkowitz also said he's opposed to Proposition 1, saying the measure is "based on stereotyping and unfounded fear."