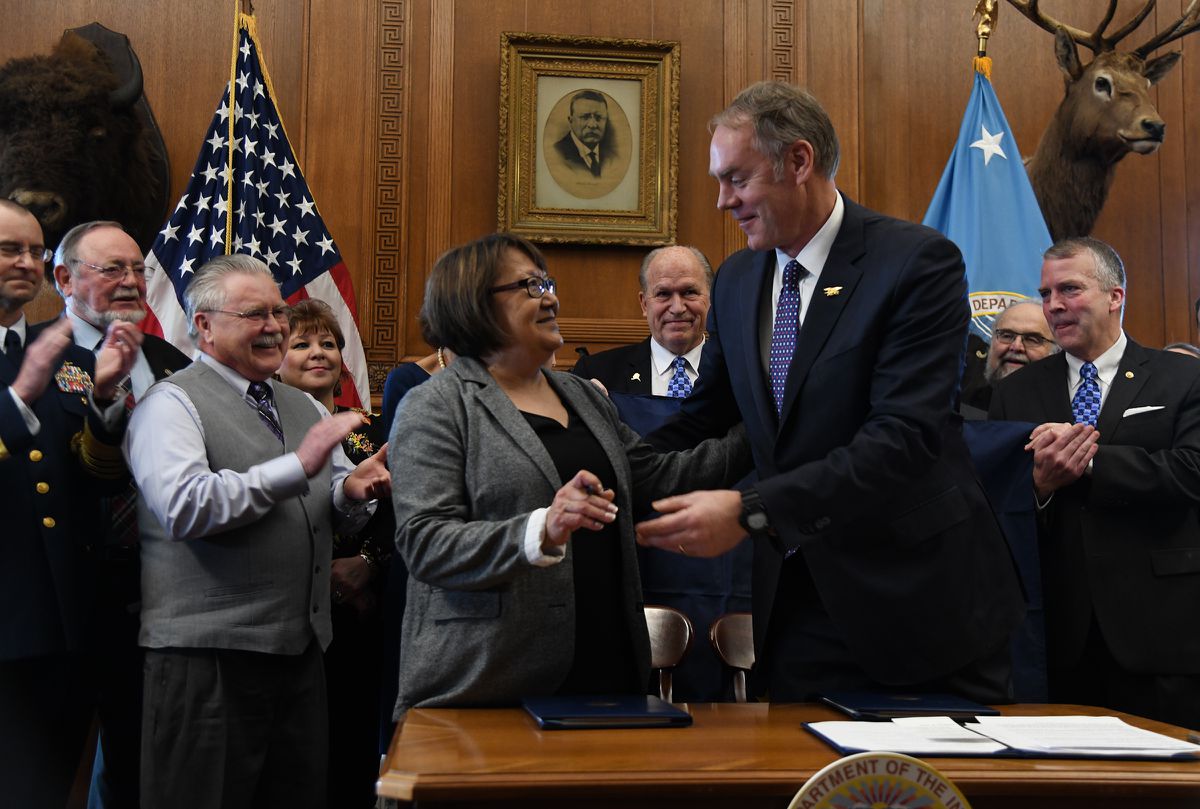 Della Trumble of King Cove Corp. and Interior Secretary Ryan Zinke at the signing of a deal Monday, Jan. 22, 2018, in Zinke’s Washington office aimed at advancing construction of a road through the Izembek National Wildlife Refuge on the Alaska Peninsula, from King Cove to Cold Bay. King Cove Mayor Henry Mack is to the left of Trumble. Also present for the signing were Alaska Gov. Bill Walker, center, and Alaska’s congressional delegation. (Courtesy U.S. Department of the Interior)

Della Trumble of King Cove Corp. and Interior Secretary Ryan Zinke at the signing of a deal Monday, Jan. 22, 2018, in Zinke’s Washington office aimed at advancing construction of a road through the Izembek National Wildlife Refuge on the Alaska Peninsula, from King Cove to Cold Bay. King Cove Mayor Henry Mack is to the left of Trumble. Also present for the signing were Alaska Gov. Bill Walker, center, and Alaska’s congressional delegation. (Courtesy U.S. Department of the Interior)

Officials from the Trump administration and an Alaska Native village corporation signed a deal Monday aimed at advancing construction of the proposed road through a national wildlife refuge on the Alaska Peninsula, from King Cove to Cold Bay.

The signing ceremony took place in U.S. Secretary of the Interior Ryan Zinke's Washington, D.C., office even though the federal government was officially shut down. Zinke, in a phone interview, said he didn't want to cancel on the group of Alaskans, including Gov. Bill Walker, that traveled to Washington for the signing.

"It's a long ways from Alaska to Washington, D.C.," he said. "Ultimately, the government should serve the people."

The signing — formalizing a land trade between the federal government and King Cove Corp. — will not take effect until the shutdown ends and government officials process the paperwork, Zinke added.

Conservation groups have vowed to sue to stop the road through the Izembek National Wildlife Refuge, saying the proposed route would jeopardize important migratory bird habitat and set a bad precedent by revoking environmental protections. About 10 miles of the road would run through an area that's federally designated as "wilderness," where roads are typically banned.

The fight over the 30-mile King Cove road is decades old and has played out in Congress, the courts and federal executive-branch agencies. The debate pits local residents, supported by Alaska elected officials, against conservation groups and resistant presidential administrations and members of Congress.

Both sides used charged rhetoric Monday after the exchange was signed.

Supporters called the deal a reversal of the "irresponsible" policies of previous administrations that prioritized birds over human lives. Opponents said it would "eviscerate," "wreck" and "bulldoze" through federally designated wilderness.

[Related: Can the isolated Alaska Peninsula town of King Cove gets is road under the Trump administration?]

Road advocates want to connect King Cove, a 900-person fishing town accessible only by boat or small plane, to Cold Bay. There's a 10,000-foot runway in Cold Bay that was originally part of a military base; jets can land there and take people to Anchorage, 600 miles to the northeast.

Without a road, King Cove residents needing medical evacuations can get stuck in bad weather or face treacherous, uncomfortable rides on boats or small planes.

"Access to the all-weather airport in Cold Bay is truly a matter of life and death to us," Della Trumble, a King Cove Corp. spokeswoman, said in a prepared statement.

Opponents say that the same bad weather that complicates air and water travel could close a road too. The planned route, across a narrow strip of land between two lagoons at the refuge's center, would also disrupt wildlife, including some of the hundreds of thousands of migratory birds that spend time there, they argue.

The refuge is home to the rare emperor goose, and the U.S. Fish and Wildlife Service says the entire Pacific population of black brant, another sea goose, stops to eat eelgrass at one of the lagoons each fall. Some of those brant then take off for a nonstop, two-day, 3,000-mile flight to Baja in Mexico.

Zinke has made the road a priority since before he was sworn in, and Monday's signing was widely anticipated. Walker and all three members of Alaska's congressional delegation attended.

U.S. Sen. Lisa Murkowski, R-Alaska, one of the most vocal backers of the proposal, said in a prepared statement that "common sense and compassion have finally prevailed."

The deal sets out a process for trading up to 500 acres of U.S. government land to King Cove Corp. In return, the federal government will get corporation lands of equal value within the boundaries of the Izembek refuge and the nearby Alaska Peninsula National Wildlife Refuge.

The agreement says the road shall be "primarily for health, safety, and quality of life." Commercial transport of fish and seafood is allowed by individuals and "small businesses" but otherwise barred.

Road critics have long asserted that one motivation for building the road is to connect Cold Bay's airport to the largest salmon cannery in North America, in King Cove.

Zinke, in the phone interview, said the road "does not affect the wildlife," since the federal government would get King Cove Corp. property in exchange for the refuge land.

That statement contradicts an environmental assessment done under former President Barack Obama's administration that said construction of the road would cause "major" impacts on several bird species and the "permanent loss" of 107 acres of tundra habitat.

Zinke said wildlife will use the road too, rather than walking through swamps, for example.

"In this case, I think the Native Alaskan voice matters," Zinke said. "President Trump has tasked me to listen to the state and listen to local interests and to work with people, rather than being the adversary."

Keatinge, with Defenders of Wildlife, said a road's impact on the environment would be greater than its benefit to King Cove residents.

An Obama-era decision rejecting the road found that there were other "viable, and at times preferable" ways to link the village with Cold Bay — namely a passenger ferry that the local government was considering at the time as an alternative.

Conservation groups, Keatinge said, don't see the road as having zero value to King Cove residents. But, she added: "We would just say that the value of these public lands and wildlife habitat are too unique and special and globally treasured to sacrifice for a road."

Once the exchange is done, Zinke said, plans for the road will be subject to reviews under the National Environmental Policy Act. The timeline for construction, he added, will be up to the state of Alaska and King Cove Corp. officials.

After the exchange is done, the land would be turned over by King Cove Corp. to the state of Alaska, which would be responsible for building the road.

Alaska lawmakers last year budgeted up to $10 million for the road project.

King Cove officials said at a Monday news conference that they hope to be driving on the road in two or three years.