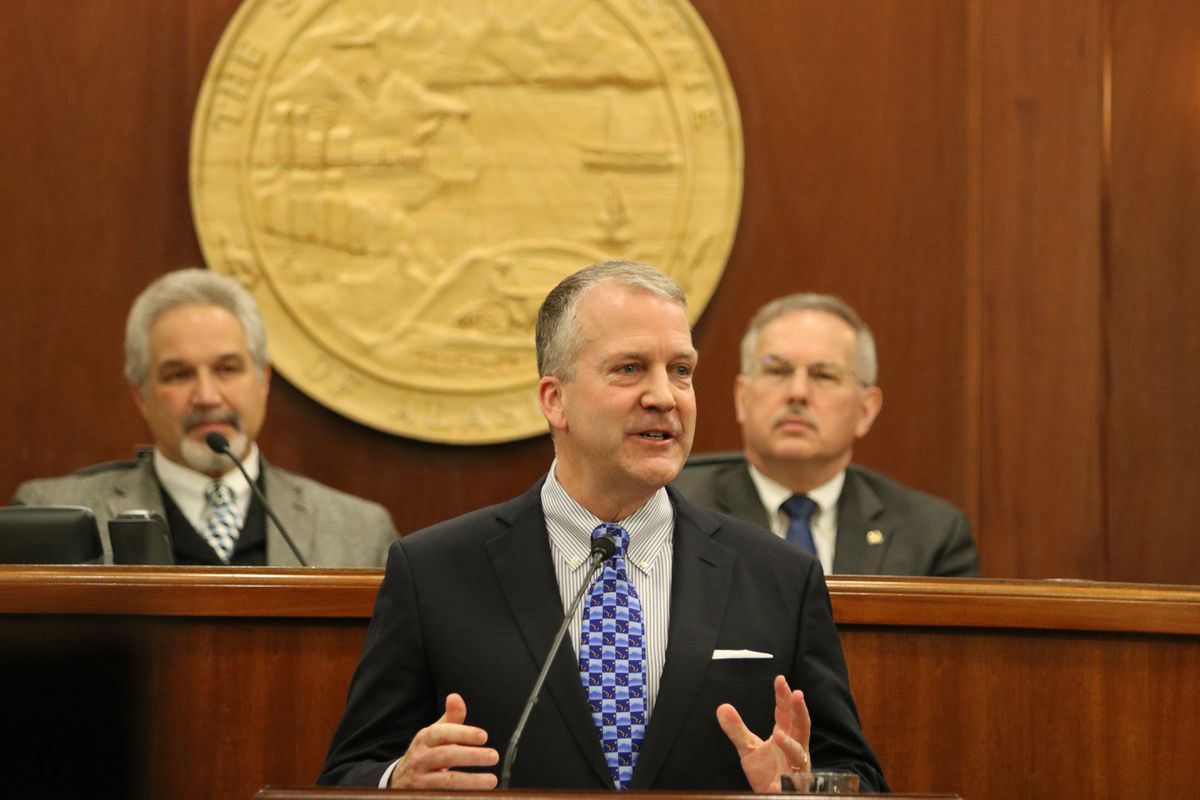 U.S. Sen. Dan Sullivan delivers his annual speech to the Alaska Legislature at the Capitol in Juneau on Monday, February 26, 2018. (Nathaniel Herz / ADN)

U.S. Sen. Dan Sullivan delivers his annual speech to the Alaska Legislature at the Capitol in Juneau on Monday, February 26, 2018. (Nathaniel Herz / ADN)

JUNEAU — U.S. Sen. Dan Sullivan told the Legislature on Monday that he's keeping Alaskans' unique reliance on guns in mind as policymakers consider how to respond to the nation's latest school shooting.

"I will carefully evaluate proposals on the federal level. However, as Alaskans, we understand how important our Second Amendment rights are," Sullivan said in his annual address to lawmakers. "We use firearms not only for self-defense, but as a tool to feed our families, and in many ways we are unique from almost every other state in the nation on this issue."

At a subsequent news conference, Sullivan, a Republican, said he was skeptical of a pair of ideas endorsed by President Donald Trump — arming teachers with guns and raising the minimum age to buy an assault rifle to 21 from 18. He focused his comments not on guns but on violence in video games and movies, saying researchers need to study whether we're "poisoning the minds of our children."

"If you're playing 'Call of Duty' or whatever every day for 15 years as a kid, which is all about how many people you can kill, you don't think that has an impact on the way our kids are thinking?" Sullivan said.

Sullivan's address to the Legislature was his first public speech in Alaska since this month's shooting in Parkland, Florida, in which 17 students and teachers were killed.

U.S. Sen. Lisa Murkowski, in her address to the Legislature last week, told lawmakers there are "no easy answers" to the problem of school shootings and urged patience and cooperation in response. U.S. Rep. Don Young, meanwhile, reiterated his opposition to gun control Thursday, and he endorsed Trump's idea of arming teachers and said the country needs to focus on mental illness and violence in popular culture.

Sullivan left his comments on mass shootings until near the end of his 35-minute address, which gave what the senator called a big-picture view of the state's past, present and future.

He started the speech with a reference to the Alaska's historic 1969 oil lease sale after the discovery of the massive Prudhoe Bay field, then pivoted to the "whole host of issues" where he said the Trump administration is cooperating with the state. He cited the massive proposed natural gas pipeline, the proposed road from King Cove to Cold Bay on the Alaska Peninsula, and the bevy of Alaskans hired into high-ranking federal jobs.

"I disagree with a number of statements and tweets made by President Trump. But in terms of a federal government that is finally working to help us grow our economy, we are making significant progress," Sullivan said.

In his comments on the Florida shooting, Sullivan said that the young Americans who have spoken out afterward — some of whom are the victims' friends and family members — "deserve to be listened to." At his news conference afterward, Sullivan said Americans have to learn from what happened, citing the fact that authorities had been warned repeatedly about suspect Nikolas Cruz.

Asked about his response to Trump's ideas, Sullivan said the proposal to arm teachers is a better question for the Alaska Legislature, though he added: "I have my doubts on that." As to the idea to raise the minimum age for buying assault rifles, Sullivan said: "That would not work in Alaska."

Sullivan reminded reporters that he's voted for legislation to tighten the national background check system for gun buyers. And he said he wants more research on the causes of school violence, though he added that he was unaware of the existence of the Dickey Amendment.

That's a federal restriction on the Centers for Disease Control and Prevention's ability to spend money to advocate or promote gun control; some experts say it has slowed progress on the study of gun violence.

But Sullivan stressed that the focus of such research shouldn't be solely on guns.

"But when I say we should study the issue of school violence, I think we should study it broadly. Which includes: Are we poisoning the minds of our children by having them watch movies and video games that glorify killing people?"