Gun control debate hits Alaska Legislature, but without consensus on what to do 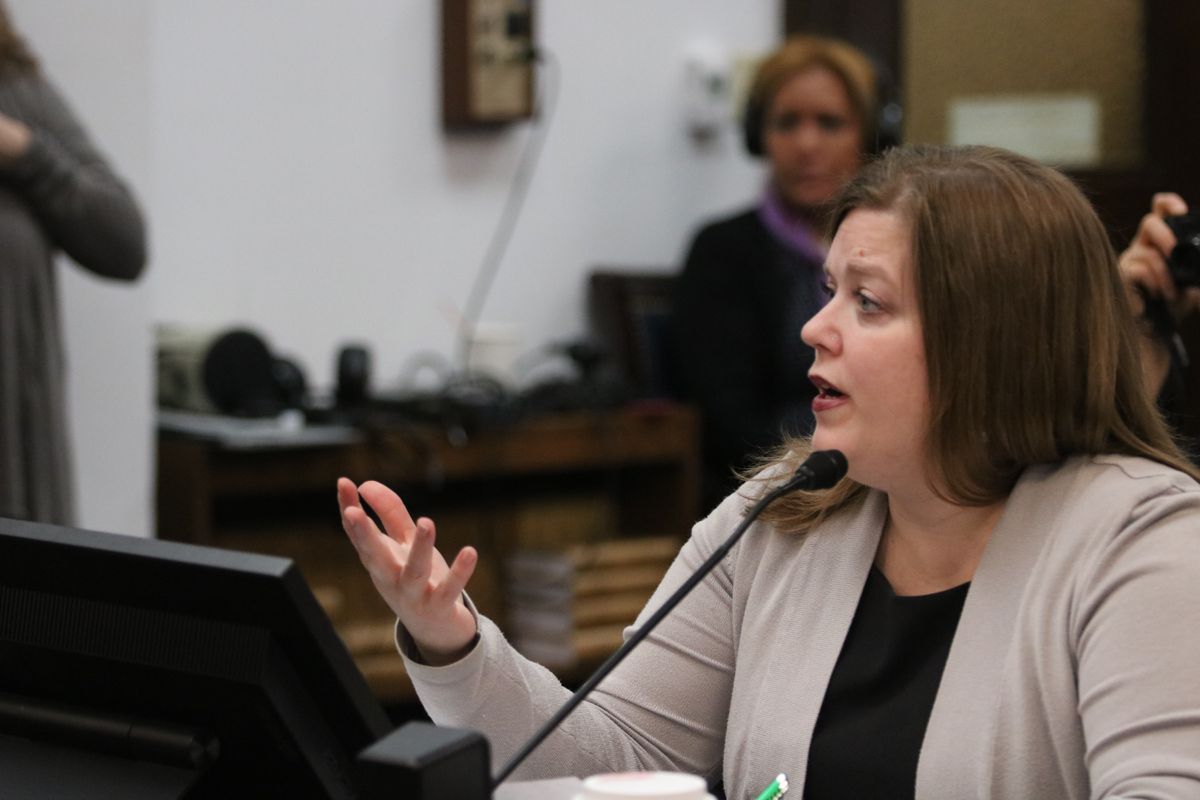 Anchorage Democratic Rep. Geran Tarr testifies Wednesday before the House Judiciary Committee. She was speaking in support of House Bill 75, her proposal to allow family members and law enforcement to ask a judge to force people to give up their guns if they’re deemed a danger to themselves or others. (Nathaniel Herz / ADN)

Anchorage Democratic Rep. Geran Tarr testifies Wednesday before the House Judiciary Committee. She was speaking in support of House Bill 75, her proposal to allow family members and law enforcement to ask a judge to force people to give up their guns if they’re deemed a danger to themselves or others. (Nathaniel Herz / ADN)

JUNEAU — The national debate over gun violence and mass shootings hit the Alaska Legislature on Wednesday as lawmakers, high school students and a National Rifle Association lobbyist converged on a hearing on a gun control measure.

State legislators spanning the political spectrum say they want to take action after the nation's latest mass shooting, at a Florida school. But as in Congress, their ideas about how to respond diverge.

Several members of the House's largely Democratic majority have endorsed House Bill 75, which would set up a system to force people to give up their guns if they're deemed by the courts to be a danger to themselves or others.

The legislation got its first hearing Wednesday, more than a year after it was introduced.

But an influential member of the mostly Republican Senate majority, North Pole Republican John Coghill, sounded skeptical of the proposal, which he said could allow for "gun grabs."

Coghill added, however, that the question posed by the bill — what to do about people with mental illness with access to guns — is a "reasonable question to ask."

"I think we do have to have a constant conversation on how to be responsible in society," he said.

Lawmakers in Juneau and Washington, D.C., have made gun control and mass shootings a focus since the mid-February shooting in Florida, in which 17 people were killed. Local law enforcement and the FBI had been warned about the suspect, Nikolas Cruz, multiple times before the shooting.

President Donald Trump met Wednesday with a bipartisan group of lawmakers from the U.S. House and Senate and surprised some Republicans by saying that law enforcement should have the ability to quickly seize weapons from potentially dangerous people.

"I like taking the guns early," Trump said. "Take the guns first, go through due process second."

But with Congress unable to agree on any gun control legislation at the federal level, some people have pointed toward states as the most likely places to adopt new policies.

"Some of the ideas, I think you're going to see make it through the Congress. But a lot of the ideas are going to be at the state level," Sen. Dan Sullivan said Monday in his annual speech to the Alaska Legislature.

Guns fill a unique and personal space in Alaska politics, given how many people use them for both hunting and self-defense.

Coghill said he kept a .410 shotgun in his car as a teenager, for grouse hunting. The House majority leader, Anchorage Democrat Chris Tuck, says he owns five: two hunting rifles, a pair of shotguns and another gun he uses to kill fish.

"Sometimes you've got to shoot those big halibut," said Tuck, a lifetime NRA member who keeps copies of the organization's magazine in his office.

Tuck, in an interview, summed up the nation's problem with gun violence and mass shootings as "an epidemic that we need to solve."

"The hard part is trying to figure out what's the best way to solve it," he said.

State lawmakers, in the past decade, have leaned toward bills aimed at protecting gun owners' rights, like a self-defense "stand your ground" law that passed in 2013 with bipartisan support.

But they also unanimously passed a bill in 2014, sponsored by Anchorage Republican Rep. Lance Pruitt, to ensure that a national background check system used for gun sales was getting information about Alaskans deemed by the courts to be mentally ill.

"I think it was just because everyone recognized that it made sense," Pruitt said in an interview Wednesday. "It wasn't an extreme, one side or the other."

More recently, the Legislature has largely set gun-related legislation aside. It has passed just one bill related to "weapons" since the onset of Alaska's budget crisis in 2015, according to a legislative database — and that was the wide-ranging 2016 criminal justice overhaul that was only tangentially connected to guns.

That's in spite of the fact that Alaska has the highest rate of gun-related deaths of any state, according to the Centers for Disease Control and Prevention. In 2016, 174 deaths in Alaska were related to guns, according to a September report by the state.

That's more than the 131 "drug-induced" deaths that year, as well as the 122 people who died from complications from diabetes, according to the report.

Claman's committee held its first hearing Wednesday on HB 75. It's sponsored by Anchorage Democratic Rep. Geran Tarr, who gave the bill a new push after the Florida shooting.

Tarr is proposing to create a system for what she's calling "gun violence protective orders," which would allow family members or law enforcement to ask a judge to temporarily require a person to give up their guns.

The bill calls for three different types — a general order that would last for six months, and two other versions that can be obtained with less evidence but last for less time.

The general order requires "clear and convincing evidence" that a person is a danger to himself or others, and it allows that person to appear in court on their own behalf. The two others require a "preponderance" of evidence and allow the order to be issued without notifying the subject beforehand.

Several states have adopted similar systems, while others are considering legislation like Tarr's.

Tarr told the House Judiciary Committee that her bill is aimed at "empowering family members to be part of the solution."

In a subsequent interview, she said she'll try to make sure the legislation accommodates uniquely Alaskan circumstances, like people in rural places who need guns for subsistence hunting. One provision already in the bill allows the subjects of orders to request modifications, she noted.

"I don't want to do something that would keep people from being able to feed their families," Tarr said.

Tarr's legislation received a deluge of support during a round of public testimony in Wednesday's hearing, including from Juneau high school students. Tarr also met Wednesday with the NRA lobbyist, Brian Judy; she said the organization hasn't opposed her legislation.

An NRA spokesman, Lars Dalseide, didn't respond to a request for comment.

Coghill, the Republican senator, said he thinks the evidentiary standard for the shorter-duration orders is too low. But he also said his Senate Judiciary Committee would review the legislation, and he noted that the bill could evolve on its path through the House.

Coghill said he prefers to focus on "mental health issues" in Alaska, including substance abuse, instead of on guns.

"The tool can be a road rage car, because of drugs and alcohol. It can be a gun. It can be an airplane. It can be somebody setting someone else's house on fire," Coghill said. "Just look over in the Middle East. Plastic explosives became the tool because guns were hard to get. If violent people are going to be violent, they're going to find ways to be violent."

Asked what measures he would support to fight that problem, Coghill pointed to Alaska's budget, which includes money for state mental health programs. He also cited the 2016 criminal justice overhaul bill that he sponsored, which diverted more money to substance abuse treatment and violence prevention programs, like mentoring and public speaking campaigns.