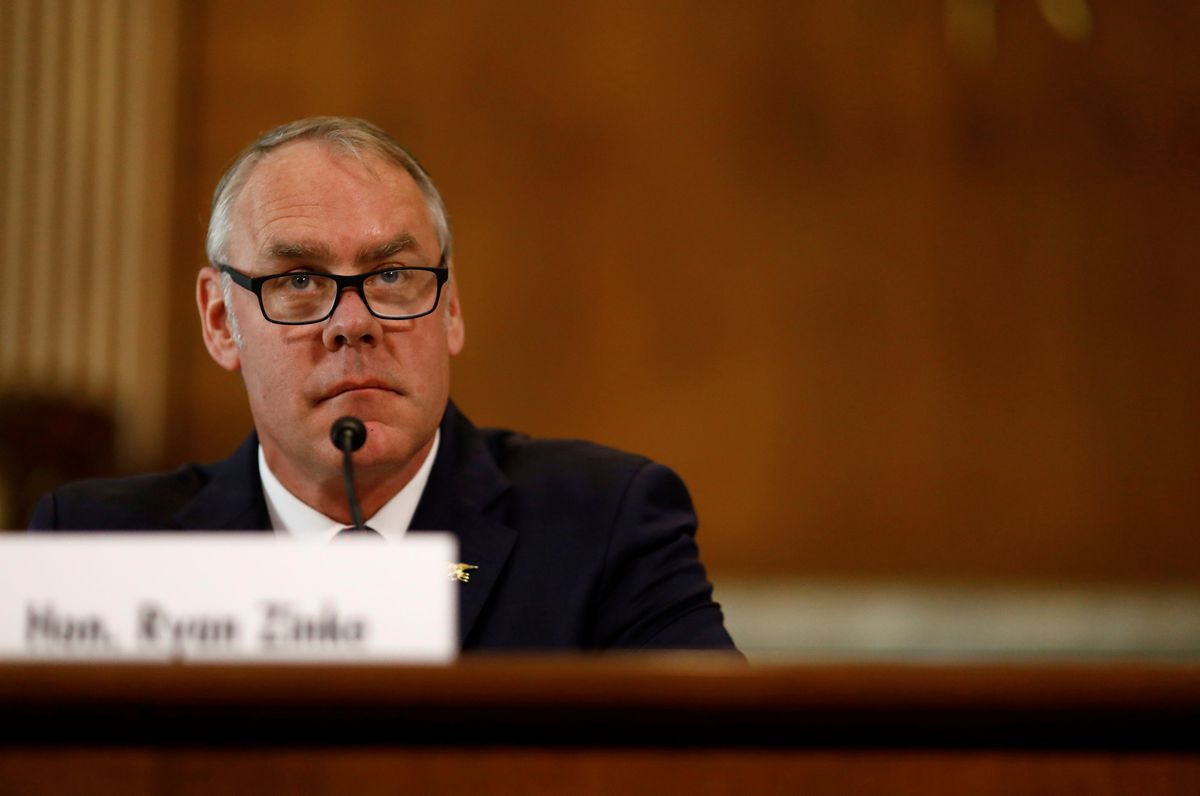 Interior Secretary Ryan Zinke testifies in front of the Senate Committee on Energy and Natural Resources on Capitol Hill in Washington on March 13, 2018. (Eric Thayer / Reuters)

Interior Secretary Ryan Zinke testifies in front of the Senate Committee on Energy and Natural Resources on Capitol Hill in Washington on March 13, 2018. (Eric Thayer / Reuters)

Murkowski quizzed Zinke on permitting for the controversial Ambler Road project and land management concerns for miners in Interior Alaska. Her efforts to secure favorable outcomes comes after a string of "wins" for the Alaska delegation with the department, including opening part of the Arctic National Wildlife Refuge to potential oil drilling and beginning the process of building a road through the Izembek National Wildlife Refuge.

"You and I have worked closely to chart a path to energy security which you have noted runs right through the state of Alaska," Murkowski said, thanking Zinke for his actions over the last year.

Murkowski questioned Zinke on the status of the department's involvement in a resource management plan for Interior Alaska, in the 40 Mile District, that was released during the final days of the Obama administration.

Zinke promised that he had "administrative options" available to help miners out, per Murkowski's request.

The deal, he said, should be that miners are allowed to develop federal land, but "there needs to be a reclamation plan to make sure that it's returned to as good or better condition than you found it."

"Often times our regulations do not take into account innovation. They don't take into account science or best practices. So when a regulatory framework becomes punitive on an industry and the local population views it as targeting, then there's a breach of trust."

"Restoring trust and being a good partner is what Interior should be. The government should not be an adversary," Zinke said.

Murkowski also asked Zinke if the Interior Department would be able to take the lead on the Ambler Road project — a proposed 211-mile road through the wilderness of the western Brooks Range — where "there is an issue that is coming up right now with regards to permits and approval," she said. Various government agencies can't seem to get on the same page when it comes to environmental assessments, Murkowski said.

Zinke knew the issue well and promised that there would be "a decision on it shortly."

"Part of the frustration has been multiple agencies involved in the same project with different objective, different locations, independently producing multiple biological opinions, which results in delay and arbitrary results," Zinke said.

Zinke faced harsher questioning from Democrats on the Energy and Natural Resources Committee about a $130,000 upgrade to his historic office and about costly private flights that Zinke has taken on the federal government's tab.

The interior secretary responded aggressively, defending his travels, his record of protecting federal lands and the agency's consideration of raising public fees for entering national parks.

"I challenge you to give me one square inch of land that has been removed from federal protection," he said to senators.

And to questions about his travels: "Well first, insults and innuendos are misleading. I never took a private jet anywhere," Zinke said. He described travels on private aircraft as "prop planes" necessary to get to meetings on time and to the North Slope of Alaska with Murkowski.

Zinke also pointed to his Obama administration predecessor, Interior Secretary Sally Jewell, who he said took scores of trips costing nearly $1 million during her time in office. "I think she was right," he said, arguing that Jewell "was out hiking and doing what she was supposed to be doing."

Ranking member of the committee Democrat Maria Cantwell of Washington said Zinke was dodging the question — about a particular trip out of Las Vegas, and said the spending question was valid and under investigation by the agency's own independent inspector general. Citizens "want to know why their park fees are going up and they're reading these stories" about costly secretarial travel, Cantwell said.

Zinke defended the agency's potential plans to boost entry feeds at some national parks — including Denali — to $70, amid a massive National Park Service maintenance backlog. Zinke said he supports low or no fees for veterans and fourth graders and the disabled, but noted that just one of those needs to be present for a whole car-load of people to receive free access to a park.

Correction: This story has been edited to reflect that the Democratic senator from Washington is Maria Cantwell, not Susan Collins.