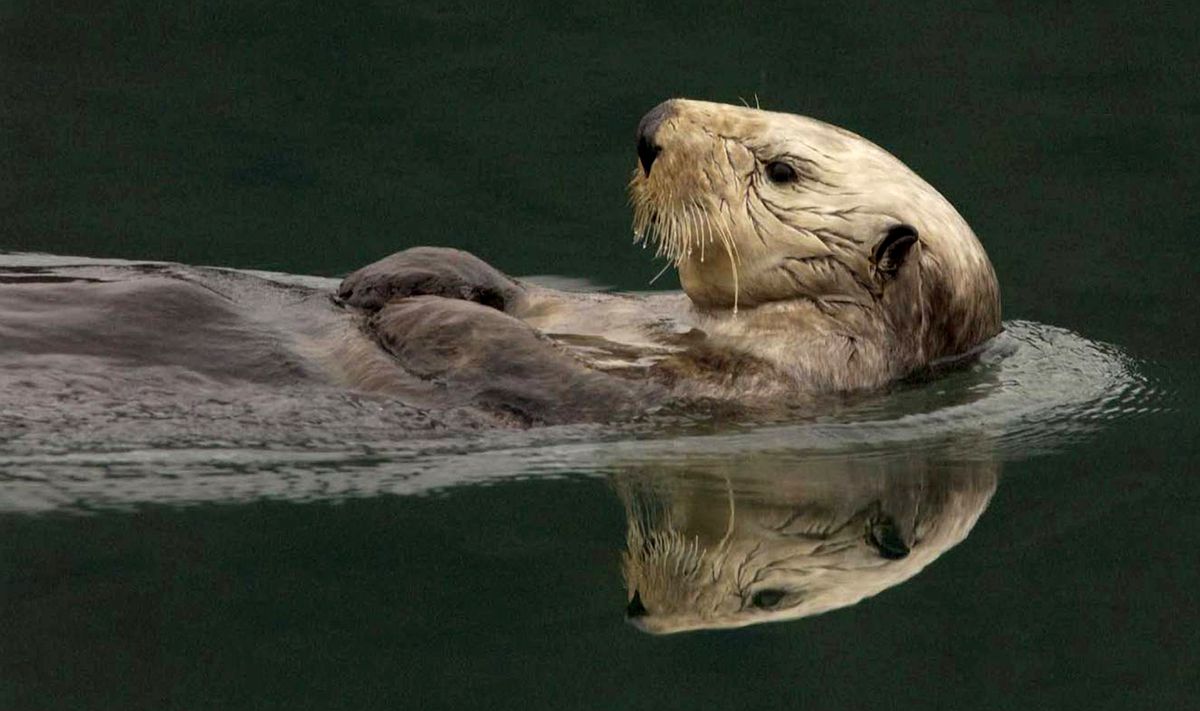 Southeast Alaska’s marine ecosystem is undergoing changes due to an increase in sea otter population. The sea otters were reintroduced to Southeast Alaska by the Alaska Department of Fish and Game during a program that started in 1965. Of the 412 sea otters reintroduced in 1965, 89 percent were relocated from Amchitka Island while the remaining 11 percent came from Prince William Sound This sea otter is from Simpson Bay in Prince William Sound in 2004. (Photo by Dr. Randall Davis / Texas A&M University)

Southeast Alaska’s marine ecosystem is undergoing changes due to an increase in sea otter population. The sea otters were reintroduced to Southeast Alaska by the Alaska Department of Fish and Game during a program that started in 1965. Of the 412 sea otters reintroduced in 1965, 89 percent were relocated from Amchitka Island while the remaining 11 percent came from Prince William Sound This sea otter is from Simpson Bay in Prince William Sound in 2004. (Photo by Dr. Randall Davis / Texas A&M University)

And now, that human dependence on shellfish is clashing anew with a successful, state-sponsored restoration program that brought the marine mammals' population back from near extinction a century ago.

The long-running conflict between otter conservation and Southeast fishermen and tribal groups has drawn new attention this year. State lawmakers and other policymakers have drafted letters asking the Trump administration and a Republican-controlled Congress to loosen federal otter protections, and to grant local managers more power to cull the animals and leave more urchins, clams, crab and sea cucumbers for humans.

Federal action is far from certain, but those who depend on shellfish warn of an increasingly dire problem.

The story of sea otters in Southeast Alaska spans more than 150 years — from when Russians hunted them to near-extermination to the 1960s restoration, which relocated hundreds of animals from the Aleutians by cargo plane.

The otter restoration has been a success, with the Southeast population growing to more than 20,000. Scientists say the otters' resurgence is restoring the environment to the way it was before the Russians, but they also acknowledge that shellfish, which boomed in the otters' absence, are now being depleted.

"I think what we're headed toward is a return to normality," said Jim Estes, an ecology professor and otter expert at the University of California, Santa Cruz. "None of this was there, almost certainly, for a long time – until the otters were hunted to extinction."

But dive fishermen, who swim or walk along the ocean floor in search of seafood, describe areas carpeted with shellfish 15 years ago that are now completely devoid of them. One Southeast tribal leader, Joel Jackson, said he listens from his home to the sound of sea otters breaking open the same clams that residents of his village want to harvest themselves.

"That's the whole thing about sea otters: They're competing with us," said Jackson, president of the Alaska Native tribal government in the Southeast village of Kake. "We don't want to completely annihilate 'em. But we'd like to keep 'em under control."

The roots of the present conflict reach back to the mid-18th century, when Russian explorers found otters in the Aleutian Islands. The Russians harvested thousands of otters a year, selling their furs largely to Chinese markets.

By 1900, there were small numbers of otters left in just 13 places in Russia, Alaska and California. An international treaty in 1911 allowed some populations to rebound, but into the 1950s, they were gone from Alaska's Southeast coast.

In the 1960s, the Alaska Department of Fish and Game began a transplant program to a half-dozen Southeast sites. The idea, Estes said, was both to restore the species to its former habitat and to give residents opportunities to sell furs.

The 400 otters came mostly from Amchitka Island in the Aleutians, where the federal government was doing underground nuclear tests.

Otters were caught in nets and flown to three Southeast Alaska airports in C-130 transport planes. They then were loaded into a Grumman Goose, an amphibious aircraft.

Otters awaiting pickup at the airports were doused with sea water by volunteers, to keep them from getting agitated, according to an account published by the state.

In the 50 years since, the otters have expanded their range far beyond the initial release sites, and their numbers are still growing. A 2008 federal assessment estimated 10,500 sea otters in Southeast Alaska, and that number rose to nearly 26,000 in the latest assessment, updated in 2014, which pegged the population's growth rate at between 12 and 14 percent a year.

Otters are effective predators; they have a high metabolism and lack blubber, eating about 25 percent of their body weight each day. In the areas where they've expanded, both researchers and fishermen say they can quickly deplete populations of abalone and sea urchins, then sea cucumbers, geoduck clams and Dungeness crabs.

Half of Southeast's urchin fishing areas have been closed, and 65 percent of areas have been impacted by "probable otter predation," according to state managers. For other fisheries, the effects are smaller, but still substantial.

One Ketchikan fisherman, Jeremy Leighton, said he used to earn as much as $100,000 a year just from gathering red urchins. He stopped a few years ago, when the urchins disappeared from his usual fishing area west of Prince of Wales Island.

He used to see "carpets" of urchins, where they'd be so close together that their spines would touch. After sea otters moved in, in spots where he used to see 100,000 pounds of urchins in a 500-foot-wide area, "you couldn't find one."

On his last urchin fishing trip, "we worked all the way down the coast for two days, didn't find any," said Leighton, president of Southeast Alaska's regional dive fishery association. "We just headed for town. We were like, 'that's it — ain't nothing left.' "

Jackson, the tribal leader, said otters are making it harder for residents to harvest clams and other shellfish in his village of Kake, where 20 percent of people below the poverty level.

"The economy's so bad here that we depend more and more on the land," he said. "There's still clams here, but they're becoming more scarce. Smaller."

Alaska lawmakers have been protesting the effects of sea otters' expansion for years. But they have been constrained by the Marine Mammal Protection Act, enacted in 1972, which placed sea otters off limits for hunting to everyone except Alaska Natives who live on the coast.

It also limits harvests to those for subsistence or clothing, which federal agencies have interpreted as barring the sale of otter pelts to non-Natives unless they've been "significantly altered" into handicrafts. And it only allows hunting by people who have at least one-fourth Alaska Native ancestry.

It also turned out that the fur market was smaller than expected, reducing the incentive to hunt, said Estes, the professor and otter expert.

Failed efforts to boost otter markets include when U.S. Rep. Don Young introduced a bill in 2011 to allow the sale of raw pelts to non-Natives. Two years later, Sitka Republican state Sen. Bert Stedman proposed legislation to offer a $100 bounty for each otter harvested. The bill didn't get a vote.

[Related: A bounty on sea otters?]

Stedman is leading another anti-otter push this year with Senate Joint Resolution 13. The measure isn't a bill — it has no binding effect and is more like a strongly worded letter to the federal government.

It contains a laundry list of requests to Congress and federal agencies: open otter hunting to any Alaska Native enrolled in a federally recognized tribe; allow raw otter pelts to be sold without restrictions; and delegate management to the state and tribes.

"The growth has continued and the harvest rate has been declining," Stedman said, citing federal data.

He added that he thinks there's a better chance of action in Washington, D.C., under Trump's administration. "Otherwise, it would be whistling Dixie in the wind," he said.

A spokeswoman for Zinke, Heather Swift, said the secretary strongly supports making fish and game management decisions at the local and tribal level. But she also suggested that the law provides federal agencies with only so much flexibility — pointing out that the U.S. Fish and Wildlife Service already places no limits on the number of sea otters that Alaska Natives can harvest.

"USFWS can work with interested parties to address conflicts, consistent with the law and available resources," Swift said in an email.

Any changes to the Marine Mammal Protection Act will have to come through Congress.

Alaska's two Republican U.S. senators, Dan Sullivan and Lisa Murkowski, are both interested in reviewing elements of the law, and Sullivan plans to hold a subcommittee hearing on the issue, a spokesman said.

But Murkowski, in a prepared statement, also hinted at the potential to provoke opposition if Alaska lawmakers are seen to be favoring a broad rollback of the Marine Mammal Protection Act.

"I do not support stripping protections for marine mammals protected under the act," she said. "Rather, I support flexibility in the framework to allow accounting for the entire ecosystem."

In interviews, officials with Alaska Native groups said they support some changes to the existing system for managing Southeast sea otters, like changing the requirement that hunters have at least one-fourth Native ancestry.

But they so far have opposed Stedman's resolution in the Legislature.

"If you go back and look at the reality between tribes and the state of Alaska, it's not a good history there," said Lianna Jack Peterson, the commission's director.

The outcome of the debate over Southeast Alaska's otters will likely depend on the value that policymakers assign to the industries and cultures that have sprung up in their absence, said Estes.

"It's one thing to tell these people that you want to help them," he said. "But when it comes to actually sending an army of people out there to start shooting sea otters, will that happen?"

There are more than 600 active commercial permits in fisheries most affected by otters — urchins, geoduck clams, sea cucumbers and Dungeness crabs. Their gross earnings in 2016 topped $15 million.

But lawmakers also acknowledge that otters help boost Southeast's growing tourism industry. And scientists say that while the animals do deplete shellfish stocks, they can also help boost the presence of some species like kelp — which produces habitat for fish and can even trap climate-warming carbon from the atmosphere, Estes said.

"You could ask the question: What's the benefit of having kelp versus the cost of losing the shellfish, and how do these things balance out?" he said. "It's complicated. It's not a simple, little problem."