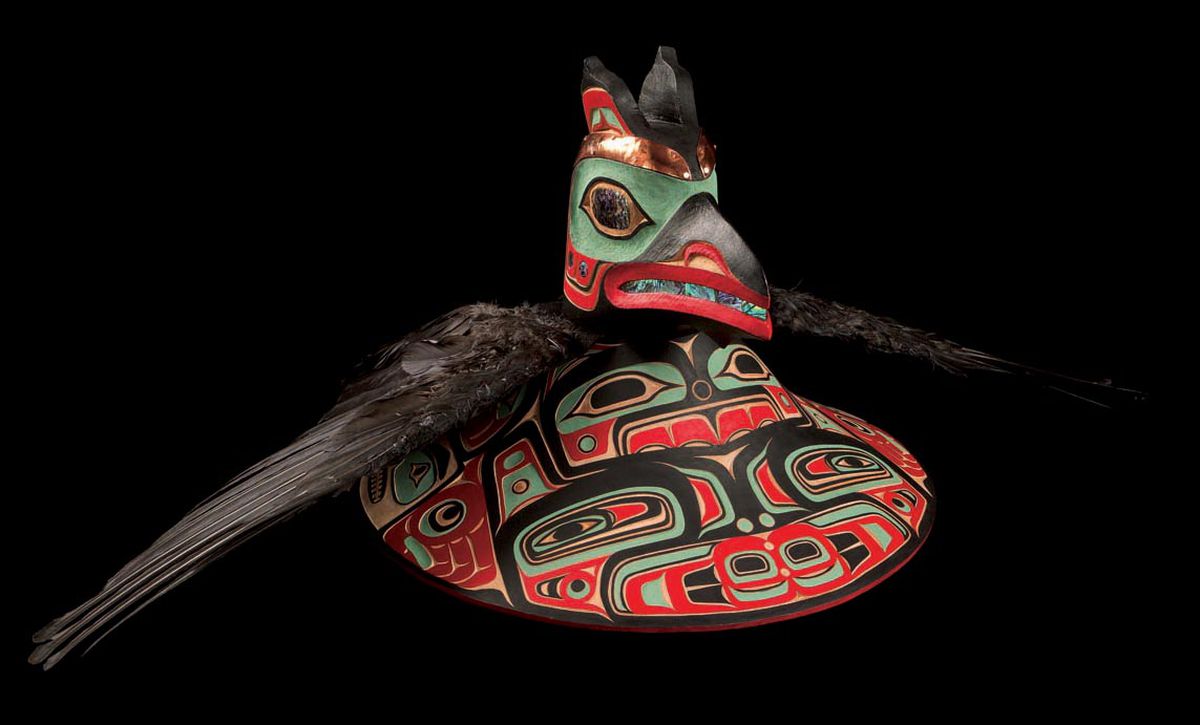 A raven hat made by Tlingit carver Archie Cavanaugh. Cavanaugh found himself in hot water for using raven feathers in the headdress and flicker feathers in a hat. The U.S. Fish and Wildlife Service said he had violated the Migratory Bird Treaty Act in using the feathers in his artwork. (Photo courtesy Sealaska Heritage Institute)

A raven hat made by Tlingit carver Archie Cavanaugh. Cavanaugh found himself in hot water for using raven feathers in the headdress and flicker feathers in a hat. The U.S. Fish and Wildlife Service said he had violated the Migratory Bird Treaty Act in using the feathers in his artwork. (Photo courtesy Sealaska Heritage Institute)

WASHINGTON —  Legislation aimed at protecting the rights of Alaska Natives to use protected bird parts in craft work, sponsored by Rep. Don Young, advanced out of committee last week, the first step to becoming law.

It now has to advance to the House floor and make it into Senate legislation too — most likely as an amendment to a larger bill. Alaska Sen. Dan Sullivan has introduced a Senate version of the bill.

But in 2012, Tlingit carver Archie Cavanaugh made a "shakee.át," a carved headdress that includes the wings and tail of a raven, as well as feathers from a flicker bird, unaware that it was against the law. Soon after, he advertised that and other items for sale online and then he heard from the federal government. U.S. Fish and Wildlife Service employees told him that he had violated federal laws and could face years in jail and thousands of dollars in fines, according to Worl and Young.

"We weren't aware that we could not sell them," said Sealaska Heritage Institute President Rosita Worl.

Cavanaugh ended up having to hire a lawyer, and he paid a $2,005 fine.

He did not respond to a request for an interview.

In response to the incident, the Alaska Federation of Natives adopted a resolution about the matter, and "we ran right over to meet Congressman Young," Worl said.

"For thousands of years, the inclusion of bones and feathers in traditional handicrafts has been commonplace in Alaska Native cultures. For decades, the U.S. Fish and Wildlife Service largely did not take enforcement actions against Alaska Native craftsmen," Young said in a statement.

It is unclear whether anyone else has faced similar enforcement actions to those imposed on Cavanaugh in 2012.

The Fish and Wildlife Service, through media officials, said their law enforcement officials would not grant interviews on the matter, or provide statistics about enforcement actions. The agency did not have information available cataloging how many enforcement actions have been initiated under the law to protect migratory birds.

The Justice Department, which handles such enforcement actions for the agency, did not answer similar questions posed to a spokesman.

"I assume that there are others," Worl said, but she could not name any. "And I'm not surprised at the things I've seen our people go through — enforcement and charges that our people get," she said.

The Fish and Wildlife Service did change some of its regulations in 2017, allowing Alaska Natives "to sell authentic native articles of handicraft or clothing that contain inedible byproducts from migratory birds that were taken for food during the Alaska migratory bird subsistence-harvest season," according to a Federal Register notice published last July.

Those regulatory changes didn't include all feathers used by Alaska Native artists, Worl said. So they worked with Young to continue pushing his bill.

"Updating this policy protects Alaska Native artists who sell handmade art that includes non-edible bird parts, regardless of how the parts are found or what species they are from," Young said.

Though the issue has dragged on for years, Worl said she is "really happy that it's moving along."

Cavanaugh ultimately got his hat back from the federal officials, minus the feathers. Worl said they hope to one day hold a ceremony after legislation is passed and reinsert the feathers into Cavanaugh's hat.