‘Why quit?’ Alaska Rep. Don Young, 85 and proud of his accomplishments, says he has the energy for a 24th term 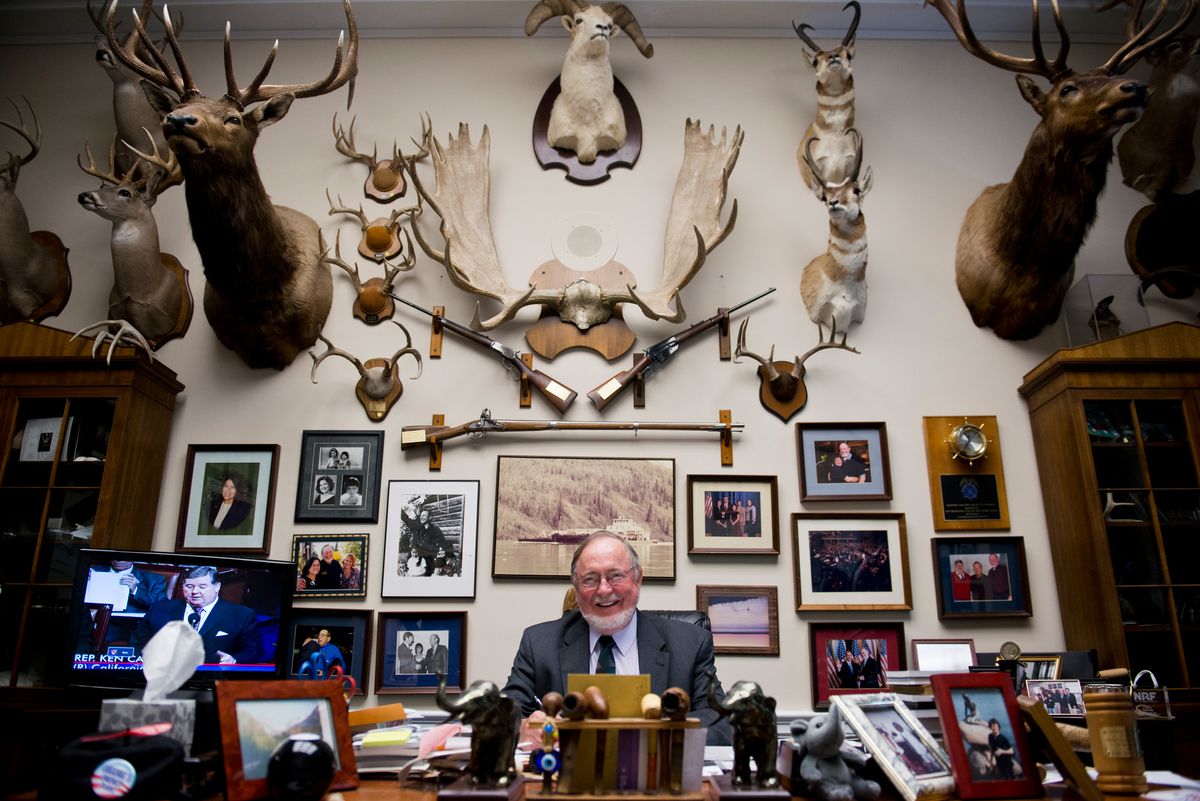 WASHINGTON — Don Young, 85 and the longest-serving member of Congress, is a noted character with his bolo tie, cowboy boots and propensity for doing things that create public relations challenges, including gaffs so off-color they might have been career-enders for representatives from other states.

He laughs easily these days. He has few concerns about his upcoming congressional race.

"I'm gonna beat the bejeezus out of anybody. And if I don't, my wife and I got a second plan," he said in a March interview. "I'm buying a motorcycle and an airplane."

His wife, Anne, six years his junior, who is almost always with him, quickly interjected: "He can buy it; he just can't ride it."

More than once, Alaska's representative has brandished an 18-inch walrus penis bone in public. He made insensitive remarks about suicide and had to apologize for a crude description of gay sex in front of a group of high school students. He had a cameo in a video talking about Viagra. He was caught making silly faces during a serious tribute on the House floor, called California farm workers "wetbacks," allegedly threatened a congressional opponent before a debate, and was caught on video twisting the arm of a congressional staffer.

Despite it all, Alaska's voters deliver him back to Washington again and again. Observers say that for many, it's a calculation: He might be rough around the edges, but so are a lot of people in Alaska. He's loyal. He knows constituents by name, his office helps them with individual problems. And, most important, his longevity means he has a strong foothold in Washington — no simple task for a state that is 4,000 miles away and afforded only one member among 435. Alaskans know they depend on their outsized take of the federal coffers. Young has proven he's good at supplying it and has several times been named one of the most effective legislators in Washington.

"Look, I like Don, personally," said Anchorage Mayor Ethan Berkowitz, a Democrat who ran against Young in 2008. Young beat Berkowitz by about 5 percentage points.

"Alaskans tend to be pretty forgiving of some of his more flagrant quotes … because he's Uncle Don," Berkowitz said. "He's the best politician that this state has ever produced."

"You know, when you think about 40 years living in a politically charged environment like Washington, D.C., none of that seems to have infected him. He's just, like, Don Young from Alaska. And I think that has held him in good stead with Alaska voters," Murkowski said.

Ask what it is that brings voters to the booth every two years for Don Young, and his backers all say a few things: He's effective at passing legislation (the statistics back this up). He's surprisingly bipartisan. He sticks to Alaska issues and sticks up for Alaska Natives. He's just Don. Outrageous on occasion, maybe. But everyone knows what they're getting.

Don Young's shortcomings are hardly a state secret: He's famous for misspeaking. He's long past the traditional age of retirement and has never even sent a text message. He has faced several serious ethics investigations, and had to pay $60,000 after a committee's finding that he accepted improper gifts, including hunting and fishing trips.

Young's political opponents have in recent years argued that he is past his prime and that the ethical violations and headline-driving outbursts are not worth the seniority. Young no longer chairs any committee or subcommittee because of Republican party term limits.

But Young has sponsored 1,081 bills and co-sponsored 5,520 bills, according to Congress.gov. Of the sponsored bills that were signed into law, the majority are Alaska-specific, save for scores of major bills he passed as chairman of the Transportation and Infrastructure Committee (though those also were chock-full of Alaska-specific provisions).

The bulk of Young's successful legislation deals with who owns and manages the vast property of the Last Frontier and the Native people who were there first. Of the 79 Young-sponsored bills that became law, 26 deal with land conveyance in some form and 21 of them are focused on Alaska Natives. (There is some overlap between the two). Many of the rest are massive pieces of transportation and infrastructure legislation from his time at the helm of that House committee.

In 2015, researchers ranked Young among the most effective members of Congress. "As he has in previous Congresses, Young continues to be a strong advocate for his home state of Alaska, the beneficiary of almost all of the more than 40 bills that he has introduced into the 114th Congress," wrote The Washington Post.

Young is proud of the imprint he's had on Alaska, particularly during his tenure as chairman of the Transportation and Infrastructure Committee.

He usually grants interviews to reporters while perched in a leather chair in his personal office, wearing a suit and cowboy boots, surrounded by walls covered with animal hides and heads and memorabilia from his 45 years in office, including a 900-pound totem pole that previously belonged to Sen. Ted Stevens (the guy more commonly known as Alaska's uncle). His second wife, Anne, is usually perched nearby.

Young's first wife, Lu, died in 2009. They were married for more than 46 years. She was a constant companion and worked with him in his congressional office. Young said that is intentional, that a spouse in the room acts as a "ballast on the ego that congressmen face all the time. It makes us more human," he said. And it avoids the problems added when one is surrounded by too many eager-to-please staffers.

[Office politics: The Alaska congressional delegation as seen in their D.C. work environs]

"It amazes me — if you go around that state, there isn't an area in that state where I haven't been involved somehow on big projects, be it the Kodiak bridge or the Kodiak expansion of the harbor or be it the Ketchikan shipyard or be it one of the clinics, all the way up and down, somewhere, my fingerprints are there," Young said.

"You think about it — I am a riverboat captain, a trapper, a gold miner, and I got to take and be elected for the people of Alaska and pass the trans-Alaska pipeline. … That 200-mile limit? We wouldn't have had a fishing industry. That's my bill. The CDQ program — the Community Development Quotas? That's made Alaska's fisheries, not Seattle fisheries. You look at the NOLs — which is Net Operation Loss — gave the tribes the ability to sell those losses at a profit. Kept them afloat until they got their feet on the ground. … There's just a lot of things that I've been involved in over these years, that it's rewarding."

Young attributes some of his ability to keep up with the demands of Congress to an ability to relax when he's off duty.

He and Anne tend to get home from the Capitol "pretty late" in an effort to avoid Northern Virginia's typically horrible traffic, he said. They eat dinner. He cooks more than she does, usually meat and vegetables; he's not into carbs. They don't watch much television, but he prefers mixed martial arts fighting, which he calls "cage wrestling" and his wife does not like, or "Forensic Files," which they both enjoy. Sometimes they'll watch a bit of "Planet Earth."

"Sometimes we just go shopping and buy a hot dog on a Saturday afternoon at Costco. That's our date," he said.

On weekdays, Don and Anne walk 2 miles in the morning before coming in to work.

"And I do a set of exercises and I lift small weights," he said. "I think that's vital. And not just a regime — I hate gyms. I want to be out where I can hear the birds and the dogs and the — say hello to people and, you know, that type thing," he said.

Several people interviewed about Young brought up his wife, unprompted, as a positive influence in his life. Young "seems invigorated in the last couple of cycles," said Tuckerman Babcock, chairman of the Alaska Republican Party, attributing the spark to Young's new marriage.

Young has no interest in retirement or rest. His decision about whether to keep running for re-election is "physical, primarily," the congressman said.

"Mentally, I don't think I'm any faster or any slower. I think I'm pretty good where I am now. But physically I won't be. And I see a lot of my friends on canes. I see them in wheelchairs. I'm not going to do that."

Young said he also depends on his wife and daughters to help tell him when it's time to let go. Other lawmakers who "stay too long" are often surrounded by "yes people."

"But you get somebody that loves you and understands you and supports you — say, 'OK, I think you should give this up' — then I got to consider," he said. "And then you have to remember the other thing — if I become more, less capable, too, the people will decide that too" in the voting booth, he said.

"But not to run, as long as you enjoy what you're doing and you're, frankly, good at it, why would you quit? Most people retire because they don't like their jobs," he said.

Young has learned over the years how to keep his profile up in Alaska. That includes his bolo ties, which he's known for wearing across the state. In Washington, he sticks to a more traditional suit, tie and cowboy boots.

Anne "says they're old-fashioned. I say they're stylish," he said.