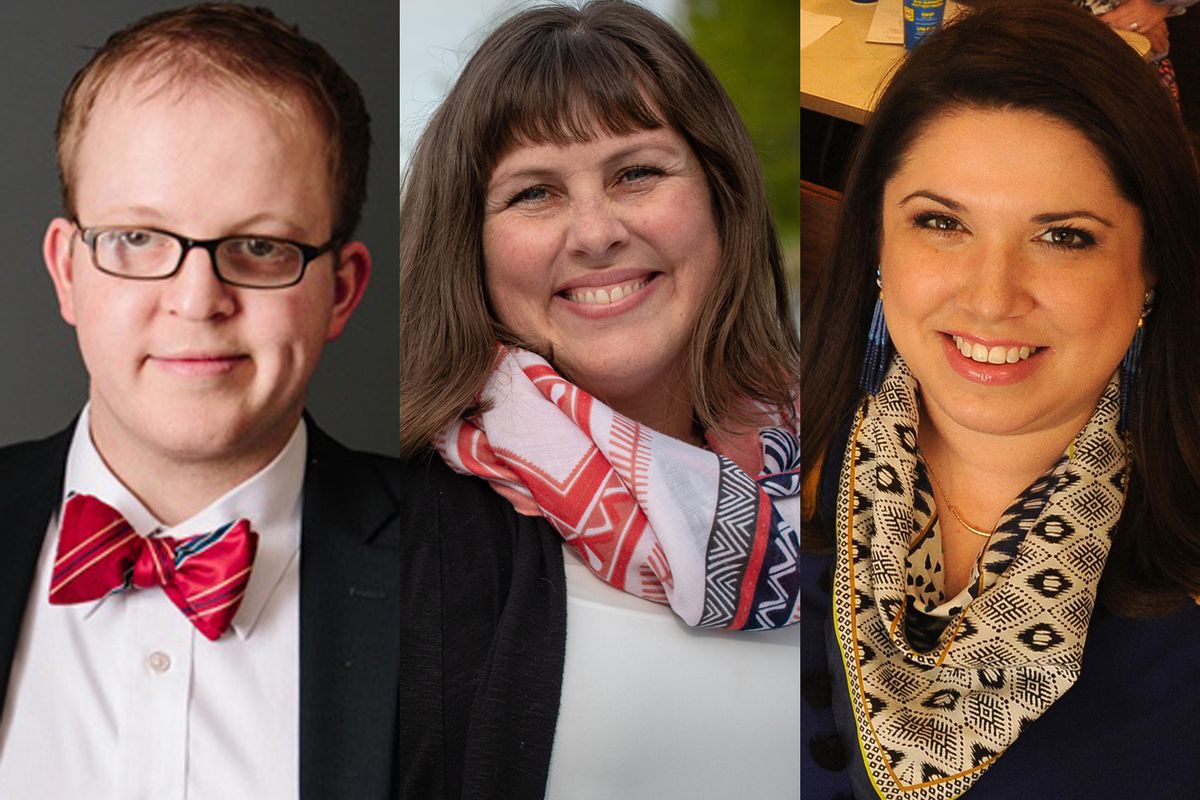 For the candidates in a special West Anchorage Assembly election, July has been a flurry of knocking on doors, waving signs and sending out campaign mail.

The unusual campaign, smack in the middle of summer, was set in motion last month with the health-related resignation of Assemblyman Tim Steele. Ballots were mailed to West Anchorage voters last week. The last day to vote is Aug. 7.

In terms of fundraising, three leading candidates have emerged to finish Steele's term: Austin Quinn-Davidson, Nikki Rose and Sam Moore. All are in their 30s and are trying to contrast their records in leadership and passion for economic development.

Each says the biggest issue in the campaign is, easily, crime. But at a time when most Alaskans are focused on deck repair, fishing and camping trips, the candidates are also finding themselves letting a lot of people know there's an election happening.

Rose, 35, is the president of the Sand Lake Community Council and has been managing the re-election campaign of Sen. Mia Costello, R-Anchorage. Rose grew up in Sand Lake, where she and her husband, Michael, a lawyer, are now raising their 5-year-old.

Quinn-Davidson, 38, is the legal affairs director for the public lands nonprofit Great Land Trust. She is a member of the city's Budget Advisory Commission. She grew up in Trinity County, a rural part of Northern California, and has lived in Anchorage seven years. She and her partner, Stephanie, live in Turnagain.

Moore, 33, is an accountant and the current president of the Northstar Community Council, the neighborhood that includes Valley of the Moon Park, and also serves on the city's transit advisory board. He grew up in Southwest Missouri and has lived in Anchorage about five and a half years.

In recent weeks, Quinn-Davidson and Rose have been knocking on doors in the district and calling voters with the help of friends and volunteers. Both have recorded videos and posted them on their campaign Facebook pages. Rose has been posting pictures of herself with supporters on Facebook and said she's gathered groups of friends to make phone calls; Quinn-Davidson said she's knocked on hundreds of doors and has had several dozen volunteers dropping off campaign literature at households, including by bike.

Many voters weren't aware there was an election happening, she said.

Moore said he's focusing on direct mail instead of door-knocking. It was already a short race, and Anchorage's shift to running the election primarily by mail made it even shorter, he said.

West Anchorage voters could start casting ballots in-person two weeks ago — a little more than a month after Steele resigned. Last week, elections officials mailed out thousands of ballots, which can be returned with a first-class stamp, at a drop box or at an accessible voting center. The West Anchorage Assembly district generally runs south of Westchester Lagoon, west of Arctic Boulevard down to Tudor Road, from C Street to 76th Avenue, and then from Minnesota Drive to West Dimond Boulevard and Campbell Lake.

Whoever wins will finish out Steele's term and will be up for re-election in April 2020. Ira Perman, the executive director of the Atwood Foundation, was appointed to fill the seat for the next several weeks until the replacement is elected and sworn in.

Assembly races are considered nonpartisan but candidates — and campaign donors — often ally themselves along party lines. Quinn-Davidson is a registered nonpartisan but has attracted progressive support, and records show her campaign has used an Alaska Democratic Party voter database. Rose and Moore are both registered Republicans.

If anything, the West Anchorage campaign so far has offered a window into Anchorage's public debate over how to battle crime. All three candidates had different ideas for how they would tackle crime, particularly property crime, which has risen dramatically across the city.

Moore said he was focused on how police resources are allocated. Voters, frustrated with property crime, would like to see more patrol cars in West Anchorage, Moore said.

Quinn-Davidson said she supports Mayor Ethan Berkowitz's efforts to sustain a much larger Anchorage Police Department than in years past. She also said she plans to delve into the root causes of crime, such as drugs and mental illness, in hopes of tackling the issue more effectively.

Rose pointed to her experience starting a community patrol in Sand Lake, which has had several dozen volunteers at times this year. Anchorage community patrols have blossomed in the wake of record levels of property crime, and Rose said that if elected she would encourage the continued growth of the patrols. She also said she wanted to support funding for more police dispatchers and for other police units, like a gang unit.

Rose and Quinn-Davidson both netted campaign donations from the Anchorage Police Department union's political action committee, or PAC. The union wrote $500 checks to both candidates, said Brian Wilson, the president of the union.

The union hasn't endorsed one candidate or the other, though Wilson indicated that both gave good answers to the union.

"They're both public safety-forward," Wilson said.

Rose and Quinn-Davidson also hope to call voters' attention to their experience in local government. Rose serves on the executive board of the Federation of Community Councils, which led to her appointment on the Anchorage Assembly's committee on homelessness. Quinn-Davidson said her role on the city budget advisory commission has given her citywide fiscal experience, on top of her legal background and experience with complex contracts.

Moore has pointed to his background as an accountant and his interest in budgets and accountability, using the slogan "Demand More" in campaign materials. On his campaign Facebook page, Moore has directed a few barbs at his opponents, indirectly referencing Rose as a candidate who "just wants to get pictures with politicians" and Quinn-Davidson as "just another attorney."

In general, the short timeframe of the campaign has offered little time for debate. As of Tuesday, there hadn't been a public forum or debate where the candidates appeared together.

To get information on how to vote in the special election, visit the Anchorage city clerk's website.