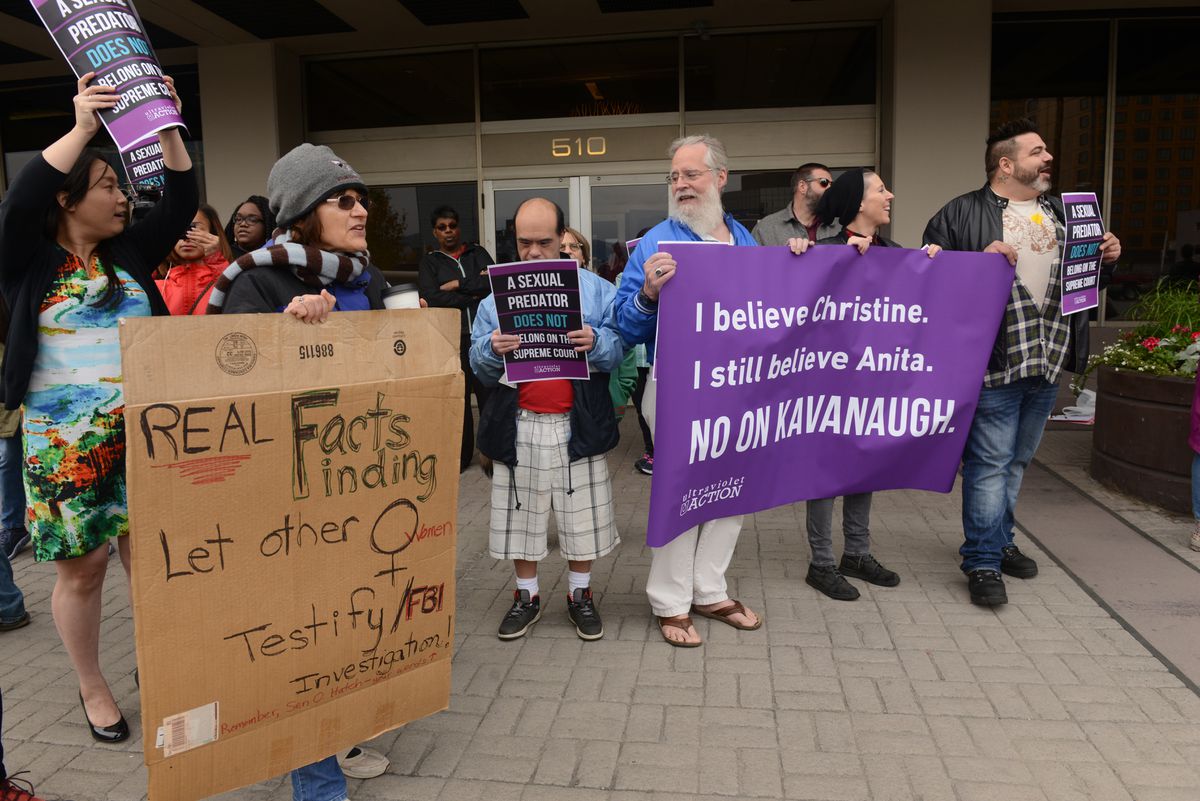 A group of about two dozen people rallied midday Thursday in front of Republican Sen. Lisa Murkowski's offices in downtown Anchorage, opposing the confirmation of Brett Kavanaugh to the U.S. Supreme Court.

The rally happened as Kavanaugh and Christine Blasey Ford, a woman who has accused him of sexual assault, testified to the Senate Judiciary Committee about that accusation.

People stood along the sidewalk near the intersection of West Fifth Avenue and L Street, holding signs that read "A sexual predator does not belong on the Supreme Court," "KAVA NOPE" and "I believe women." Some cars honked as they drove past.

Victory Cheney, 45, was one of the protesters. She lives in Anchorage and said she showed up to urge Murkowski and Sen. Dan Sullivan, R-Alaska, to stop Kavanaugh's confirmation process, or vote no on him. Cheney called Kavanaugh a threat to the future of women's rights.

"And frankly, with the Schneider case and Ashley being murdered, our state has to do better," she said. "We have to do better for women."

Bill Heubner, 59, was also protesting in front of Murkowski's office. Some of the things he's concerned about are health care, working-class people, abortion and LGBT rights.

"When you look at the fact that the Alaska Federation of Natives, all united and came out and said, 'We oppose this nomination,' to me that's really saying something," Heubner said. "I think that Lisa needs to be aware of the fact that those are her constituents, too, and be thinking about the next election, perhaps."

Murkowski will be a key vote in whether Kavanaugh gets confirmed. Since the emergence of Ford's allegations of sexual assault against Kavanaugh, two other women have also made accusations against him.

At one point during the rally, a man drove past slowly, holding a cardboard sign out his window that read, "Cry baby lossers" (sic), with teardrops also drawn on it.

Scott Hayden, 37, stood on the sidewalk at Thursday's rally holding a sign that said, "I believe Dr. Ford." He said he hopes that, "at a minimum," Murkowski will refuse to vote yes until after an FBI investigation into the allegations.

"This is a lifetime appointment, they can slow down and investigate," he said. He also said that voting on Kavanaugh without a thorough investigation "sends the message to survivors of domestic abuse that they don't matter. And I don't believe that."

Wendy Isbell, 53, lives in Anchorage. She said she holds a Supreme Court judge to a higher standard than the average person.

"I just can't afford to have someone like Brett Kavanaugh be the deciding factor on changing Roe v. Wade," she said. "They say they won't, but I don't believe that. I believe that's their agenda, and that's why they're fighting so hard for him, the Republicans are."

A Facebook page for the event said it was hosted by three groups: Indivisible Anchorage, UltraViolet and Women's March.