Blasted by Trump and GOP, praised by others, Murkowski takes independent course on Kavanaugh 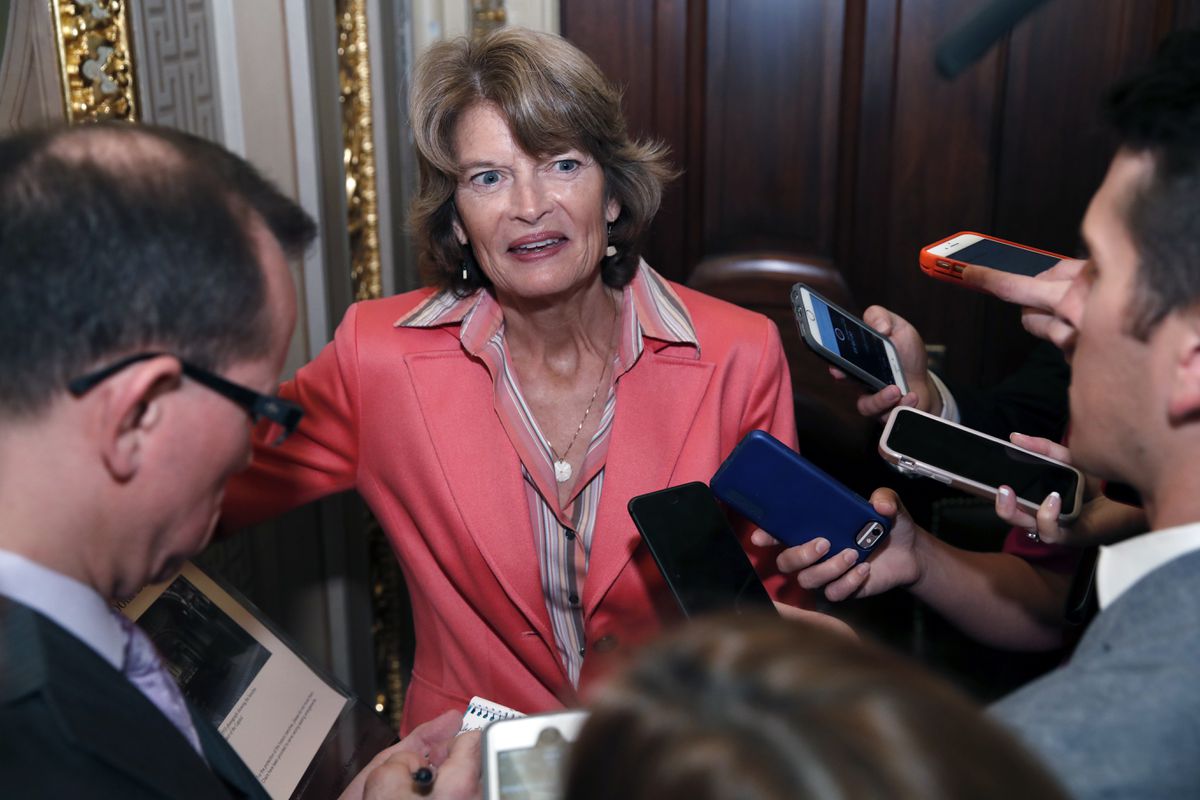 Applauded by many but derided by President Donald Trump and her own Republican Party, Sen. Lisa Murkowski said Saturday her opposition to Brett Kavanaugh's appointment to the U.S. Supreme Court was driven by the facts at hand, not possible political retaliation.

"As a senator I've got one obligation here," Murkowski, R-Alaska, said in an interview with Alaska reporters Saturday. "I have to do the work that I believe is necessary in order to inform my decision, weigh and evaluate and use the best judgment I can and ultimately vote my conscience. I expect every one of my colleagues to do the same."

Trump, in a phone interview with The Washington Post on Saturday, said Murkowski will not survive re-election in 2022 because of outrage in Alaska over her opposition to Kavanaugh.

"I think she will never recover from this," Trump said. "I think the people from Alaska will never forgive her for what she did."

"I am both shocked and disappointed," said GOP Chairman Tuckerman Babcock. "This vote (by Murkowski) is something that will stand and linger and mark a point in time."

On Friday, former Alaska Gov. Sarah Palin tweeted "Hey @LisaMurkowski – I can see 2022 from my house…," prompting speculation Palin might take Murkowski on in her next re-election battle.

[Trump says Murkowski 'will never recover' for voting no on Kavanaugh]

But others rose to Murkowski's defense, saying she has strengthened her support among a broad group of Alaskans.

"There are are lot of progressive woman that vote for Sen. Murkowski, though she's a Republican, because we understand she doesn't always follow party lines and takes a critical look at each issue independently," said Kim Jones, an Anchorage resident who traveled to the capital this week and personally urged Murkowski to reject Kavanaugh.

"If she had voted yes then I think she would have lost a lot of supporters," Jones said.

The Senate on Saturday voted 50-48 to confirm Kavanaugh to the court. The decision is expected to push the court in a more conservative direction. The confirmation became especially controversial in recent weeks after three women brought decades-old sexual misconduct allegations against Kavanaugh, which he strenuously denied.

Sullivan voted for Kavanaugh. In a floor speech Saturday, Sullivan noted his own efforts working to combat sexual assault and domestic violence as a former Alaska attorney general.

Like Murkowski, Sullivan called the process leading to the decision "gut-wrenching."

"At the same time, I do not agree with some of the comments made on the floor that a vote in favor of Judge Kavanaugh is somehow condoning sexual assault or not believing survivors," Sullivan said.

"This is not a Republican versus Democratic issue: This is an American epidemic and frankly, it's an American male issue. The men are the ones who are committing the vast majority of the abuse, and we need the country united to stop it," Sullivan said. He mentioned "my very good friend" Murkowski, saying "I very much appreciate her friendship. Like so many, this process has been difficult for her."

He said a lengthy meeting with Kavanaugh, and a thorough examination of his record convinced him he was a solid choice.

"He understands the importance of separations of powers and federalism, holds a healthy skepticism regarding the expansive power of federal agencies, and that he is a strong protector of the Second Amendment — all issues that Alaskans care deeply about," Sullivan said.

Murkowski gave a floor speech after voting against Kavanaugh during a procedural vote on Friday. She said the judge's temperament, underscored by sometimes sharp exchanges with questioners last week as he denied accusations of sexual misconduct, did not befit a nominee seeking a lifetime appointment to the highest court in the land.

As many people lose faith in the executive branch — including the Trump and Obama administrations — and lose faith in Congress, the judiciary must be held to the highest standards, Murkowski said.

"And even in the face of the worst thing that could happen, a sexual assault allegation; even in the face of an overly and overtly political process, a politicized process; even when one side of this chamber is absolutely dead set on defeating his nomination, from the very get-go, before he was even named; even in these situations, the standard is that a judge must 'act at all times in a manner that promotes public confidence. …'

"After the hearing that we all watched last week, last Thursday, it became clear to me, or it was becoming clearer that that appearance of impropriety has become unavoidable. … I am reminded there are only nine seats on the bench of the highest court in the land and these seats are occupied by these men and women for their lifetime and so those who seek one of these seats must meet the highest standard in all respects at all times and that is hard."

Murkowski voted "present" Saturday as a courtesy to Republican Kavanaugh supporter Steve Daines, who was to walk his daughter down the aisle at her wedding in Montana. That balanced out the absence without affecting the outcome, and gave Kavanaugh the same two-vote margin he'd have received had both lawmakers voted.

[Alaska Sen. Dan Sullivan's full speech to the Senate on why he supported the Kavanaugh confirmation]

Some 200 angry phone calls flooded into the party's Anchorage headquarters after Murkowski's speech on Friday, causing the phone system to crash until a repairman arrived to reboot it, Babcock said. That was a first.

A few hundred other objections arrived by email and Facebook, he said.

Only two callers who got through and a few Facebook posters said they supported Murkowski's decision, he said.

"Among Republicans the response is pretty uniformly negative," Babcock said.

Babcock, "shocked and disappointed" by Murkowski's vote, said he will send a letter to her by Monday seeking an explanation of her thinking.

Her answer will be part of a process that could lead to a public rebuke from the party's 83-member central committee, or worse. Options include trying to remove Murkowski in 2022, such as by eliminating party funding and other support.

We are both shocked and disappointed by the decision of US Senator Lisa Murkowski to oppose the confirmation of Brett...

Such a severe step is unlikely, Babcock said.

"I'm confident there will be a significant response from the Republican party, but I cannot say what," he said.

Murkowski, since winning a historic write-in victory in 2010 against Joe Miller after he upset her in the GOP primary, has ridden an independent streak to become perhaps the state's most powerful Republican.

She's enjoyed key support from moderate Republicans and Democrats, and the Alaska Federation of Natives, representing 140,000 Alaska Natives and an opponent of Kavanaugh's appointment.

In the 2016 presidential campaign, both Murkowski and Sullivan denounced Trump and called for him to drop out of the race after release of a video in which the candidate boasted in vulgar language about forcing himself sexually on women. Trump won Alaska with 51.3 percent of the vote (Hillary Clinton had 36.6 percent).

After the election, Murkowski developed a working relationship with Trump. Last summer, she recalled a phone call with Trump after the election,. "He said, 'You know, I did well in Alaska, didn't I?' And I said, 'Yes sir, you did.' And I said, 'So, I wasn't one of those Republicans who supported you.' And he said, 'Uh huh.' And I said, 'But here's the deal: You won; I won. You want to do good things for the country; I want to do good things for the state. I figure we can be working together to do just that.' And he said, 'Absolutely.' And that's kind of how we have approached the issues that we've been working on."

In 2017, Murkowski was a critical vote in bucking her party and rejecting the Republican effort to repeal the Affordable Care Act, angering her party once again, and drawing a sharp Twitter rebuke from Trump.

The Trump administration threatened retribution for Murkowski's vote at the time, but the senator has continued to play a key role as Alaska's delegation has stacked up victories with help from the administration. That includes achieving the decades-old goal of opening the Arctic National Wildlife Refuge to drilling in December.

Murkowski has voted in line with Trump positions 83 percent of the time, according to FiveThirtyEight, a website that analyzes polls and politics. Sullivan was at 93 percent.

[Their relationship with Trump has ups and downs, but wins stack up for Alaska's congressional delegation]

Casey Reynolds, spokesman for the American Civil Liberties Union of Alaska, which helped send more than 100 Alaskans to the capital to lobby Murkowski, said the senator holds the upper hand.

"I think a certain contingent of the Republican Party has tried to beat her before, and she's prevailed every time," he said. "I think she'll continue to do that. Alaskans trust her, and know she has their best interests at heart, and they will continue to support her for that."

Daily News reporter Kyle Hopkins and the Associated Press contributed to this story.