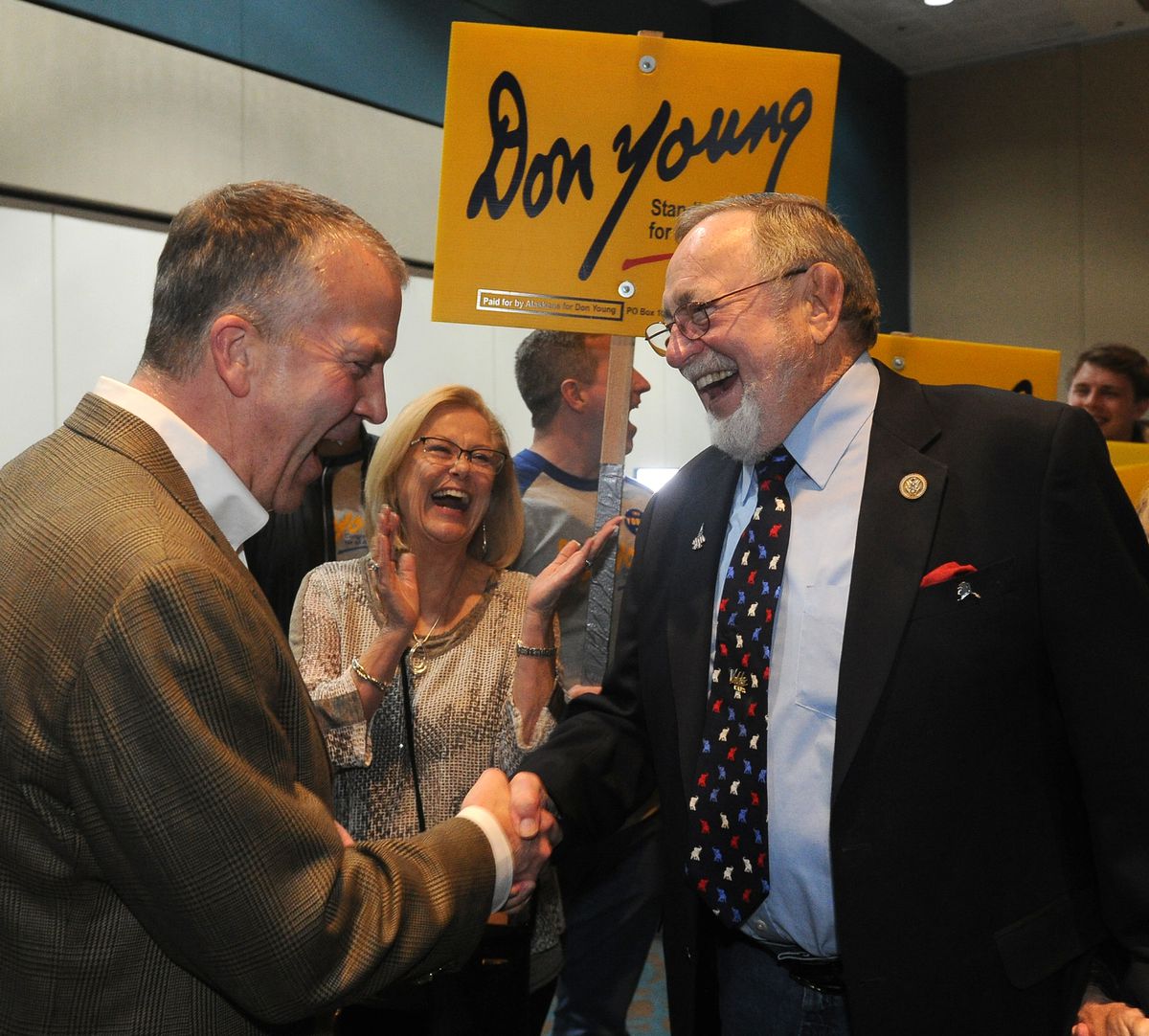 With 98 percent of precincts counted statewide, Young held 54 percent of the vote to Galvin's nearly 46 percent. Victory was never in doubt, he said in a scolding interview with reporters.

"The people of Alaska, I thank them," he said. "They've supported me these years and I've supported them and that's what it's all about."

Galvin's campaign watched the returns in an overflowing ballroom at 49th State Brewing Co. in downtown Anchorage, dancing beneath moose antler chandeliers. A speaker took the stage and read the first percentages to the crowd, who replied with a chorus of boos.

Galvin said she was inspired by her supporters and disappointed by the vote count, with Young's lead growing throughout the night.

"Every town I go to I hear new stories about the needs, the wishes, the hopes of Alaskans and it inspires me to want to work harder to ensure the people of Alaska are truly getting what they deserve," she said. "Real representation when it comes to basic needs of pharmaceutical drug costs, housing, jobs with livable wages. These are real issues."

[Dunleavy on track to become next governor of Alaska]

Craig Compeau, a Fairbanks boat and snowmachine dealer and longtime Young supporter, said before the election that Galvin had been light on specifics during her campaign and that he had urged Young to attack her on policy.

"All she talks about is rolling up her sleeves," Compeau said. "If she wants to save some time, she should just get a short-sleeved shirt."

The crowd of Galvin supporters on Tuesday night included a trio of young women who described the independent candidate as a role model. Dona Kubina stood among them wearing a "Nasty Women" shirt — a nod to President Trump's campaign debate remarks about Hillary Clinton — as she made her way through the throng.

Alyse Galvin speaks with supporters after her apparent loss to Don Young. pic.twitter.com/Q5b1kllHWY

"I've never seen anyone work as hard as her on a campaign," Kubina said.

But in Alaska, the dynamics that appeared to deliver control of the U.S. House to Democrats failed to dislodge Young, the most stubborn of Republican incumbents.

Young, who has served as Alaska's sole congressman since 1973, had faced his most well-funded challenger yet in Galvin. A first-time candidate, Galvin hoped to become the first woman to serve as the state's U.S representative. Young, 85, sought to maintain a 45-year winning streak.

Galvin, 53, portrayed the incumbent as beholden to special interests and campaigned on delivering job growth, better health care and education. Young cast himself as an experienced warrior for Alaska interests.

National analysts such as FiveThirtyEight and the Cook Political Report considered Alaska to be "leaning Republican" but saw Galvin as within striking distance of Young. (The Cook report listed Alaska among House Districts that were only in play due to "Republicans with self-inflicted wounds," meaning red districts where Democrats or independents would normally not be considered competitive.)

Galvin's voter registration is "undeclared." With her August victory in the Democratic primary, she became the first independent candidate to represent the party in the general election. Young portrayed her as a liberal and potential ally to House Minority Leader Nancy Pelosi. His campaign ads — using imagery of falling bombs — warned of "the mother of all tax hikes" if she won election.

Galvin ads said she would refuse gifts from lobbyists and special interests — possibly a nod to a 2014 finding that Young broke ethics rules by accepting hunting trips, rides on private planes and other gifts and failing to report them on disclosure forms.

Galvin raised far more money, collecting $1.4 million as of mid-October. That's a larger war chest than any Young opponent, including current Anchorage Mayor Ethan Berkowitz, who challenged Young in 2008 and lost by five points. The last time Young received less than 50 percent of the vote was 1992, against Democrat John Devens.

Of Galvin's total, at least $409,000 was donated through ActBlue, an online fundraising platform that connects political donors with progressive candidates.

Young raised $1.04 million. He received $482,000 from PACs representing corporations, unions and other interests.

Young has earned the nickname "Teflon Don" for overcoming scandal and setbacks that might derail other candidates. Like the time he apologized for insensitive remarks on suicide. Or the time he called California farm workers "wetbacks." Or was caught on camera twisting the wrist of a congressional staffer.

The 2018 campaign was, in comparison, a peaceful affair. In interviews, Galvin downplayed one flare-up, in which she appeared to react in pain as Young shook her hand during an appearance at the Alaska Federation of Natives convention. Young's campaign called it a moment of theater by Galvin while Galvin said it was a "cheap bully tactic" by Young.

Young waved away reporters' questions about whether the outcome was ever in doubt. "Mostly that was made up by the media. I know the numbers pretty well," he said.

Those who know Young best saw the victory coming.

Early on Tuesday, Galvin stopped for lunch at the Lucky Wishbone, a downtown fried chicken joint that serves as the beating heart of Election Day politics. Galvin was greeted by Sen. Lisa Murkowski, who said she's grateful that her name won't appear on a ballot again until 2022.

Young has been Alaska's congressman since before Murkowski, 61, was old enough to vote. She told the Daily News she never doubted he would survive this latest challenge too.

"Don Young has nine lives. He has not used them up," she said.