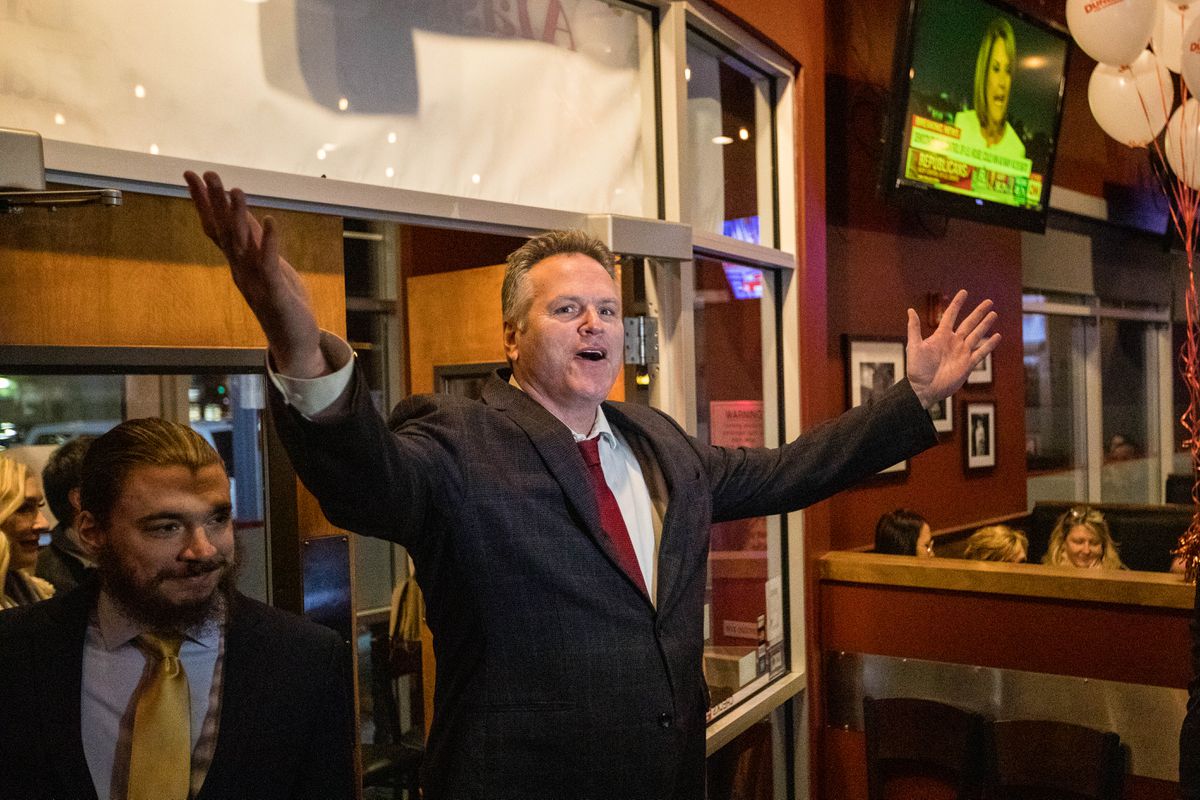 An updated version of this story is available here.

Dunleavy had 52 percent of the vote to Begich's 44 percent.

Earlier story: Republican Mike Dunleavy had the lead in the Alaska governor's race over his Democratic opponent Mark Begich as early voting results came in at about 9:15 p.m. on Tuesday.

He said it had been a busy day of campaigning, and he felt great.

"We've run a great campaign, we'll see what the numbers are here in a little while, but it's been one of the greatest experiences of my life," he said. I've got to meet a tremendous amount of fantastic people, got to see the state and, again, just looking forward to the numbers and we'll see what happens."

Begich walked into Flattop Pizza + Pool Tuesday night with his running mate, Debra Call, and his family. The crowd cheered and chanted, "Mark."

Begich said in an interview around 9:45 p.m. that he was feeling good and anticipated a close race.

"I've been looking forward to this day. This is the day you wait for. You wait for these numbers and then you — one of two things will happen: You win or you lose. And at the end of the day, we put a great agenda forward. If we win, we'll be able to push that forward. I think that's an important part of the campaign. So I kind of like where we're at right now.

Asked about the election results with about 18 percent of precincts reporting he said: "It doesn't mean anything."

"You've got to wait for a couple patches to come in."

Dunleavy and Begich have been locked in a two-way fight to be Alaska's next governor since incumbent Gov. Bill Walker, an independent, suspended his campaign for re-election on Oct. 19. Just days before that, his former Lt. Gov. Byron Mallott unexpectedly resigned after making unspecified "inappropriate comments" to a woman.

But because Walker didn't formally withdraw from the race by the Sept. 4 deadline to do so, his name and Mallott's remained on the ballot. Walker had received nearly 3 percent of the vote as early results came in.

Dunleavy was at the Anchorage Alehouse in Midtown this evening, with the Alaska Republican Party Election Central event. Begich supporters were gathered at Flattop Pizza + Pool in downtown Anchorage.

Pretty packed at Flattop Pizza + Pool in downtown Anchorage, where Mark Begich supporters are gathering. He wasn't there yet as of ~5 min ago. #AKElect #AKGov pic.twitter.com/LyrUp49tjT

Polls closed at 8 p.m. The Division of Elections will continue to update the results this evening.

Check back for updates on this developing story as more results come in. Find more election coverage here.