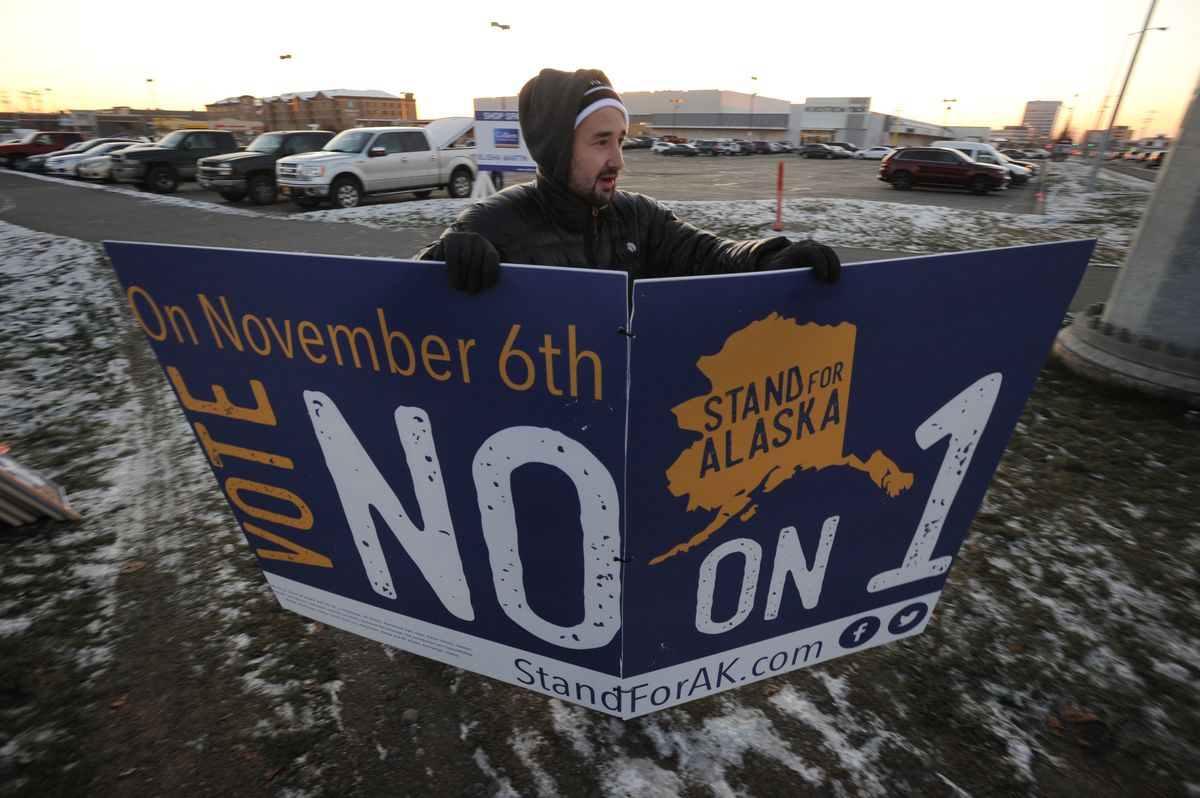 A ballot measure designed to boost protections for salmon and other fish failed by a large margin Tuesday night amid an onslaught of heavy opposition spending by powerful oil and mining interests.

"We had an uphill battle the entire way," said Stephanie Quinn-Davidson, a measure sponsor and former state fisheries biologist, noting the overwhelming spending by the opposition. "But this effort was unprecedented and we will continue to move this forward."

Commonly called Stand for Salmon, the controversial measure generated more than $12 million in spending. At least $10.2 million of that was spent by industry-led opposition group Stand for Alaska — Vote No on One.

[Dunleavy on track to become next governor of Alaska]

Opponents had contended the measure would create project delays and costs, halting some development.

More than 100 supporters of the measure, gathered at 49th State Brewing Co. in Anchorage on Tuesday night, took early indications of defeat quietly in stride as they appeared on a big screen.

Some said win or lose, they'd been successful in starting a statewide discussion about the need for stronger protections for salmon habitat.

"Salmon now have a seat at the table, they're no longer just on the platter," said Mike Wood, another measure sponsor and a Cook Inlet commercial fisherman.

Capozzi, speaking by phone from the Captain Cook Hotel Quarter Deck, where Stand for Alaska had gathered, said the large amount of money spent by the group was needed to help educate Alaskans about the negative effects the measure would have on jobs and the economy.

"We just had to explain what it really meant," Capozzi said. "Alaskans are really smart and they got it."

The measure was launched more than a year ago as major mining projects such as the Pebble prospect in Southwest Alaska advanced, and conservation groups, fishing interests and others grew concerned over state laws they considered weak and outdated.

The third sponsor was Gayla Hoseth, an Alaska Native from the Bristol Bay region. More than 40,000 Alaskans signed the measure.

The measure would have mandated public comment periods for major projects and added other regulatory steps before the Alaska Department of Fish and Game could permit activity affecting anadromous fish habitat. Such habitat includes streams or other waters where ocean-dwelling fish such as salmon return to spawn.

Supporters saw the measure as a way to restrict, if not stop, projects like Pebble. It also would have added regulatory steps for smaller activities, and for existing mines, oilfields and other development seeking permit renewals.

Quinn-Davidson said her group is ready to work with Alaska Native corporations and state lawmakers to introduce a bill that increases habitat protections for salmon and other fish.

"It's clear Alaskans want stronger protections for salmon," she said. "We just disagree about the approach."

Alaska's major oil producers ExxonMobil, ConocoPhillips and BP, along with mining corporations such as Kinross Fort Knox, Teck Alaska and Pebble Limited, led funding for Stand for Alaska at $1 million each.

Yes for Salmon and other pro-measure groups spent at least $2.3 million.

The fight over Stand for Salmon shared some similarities with the $15.3 million battle over Alaska oil taxes in 2014. Voters then faced ballot language designed to repeal and replace a new oil-production tax.

Industry, led primarily by the state's major oil producers, heavily outspent the pro-measure forces then, too. Voters rejected that measure, though by a much slimmer margin.