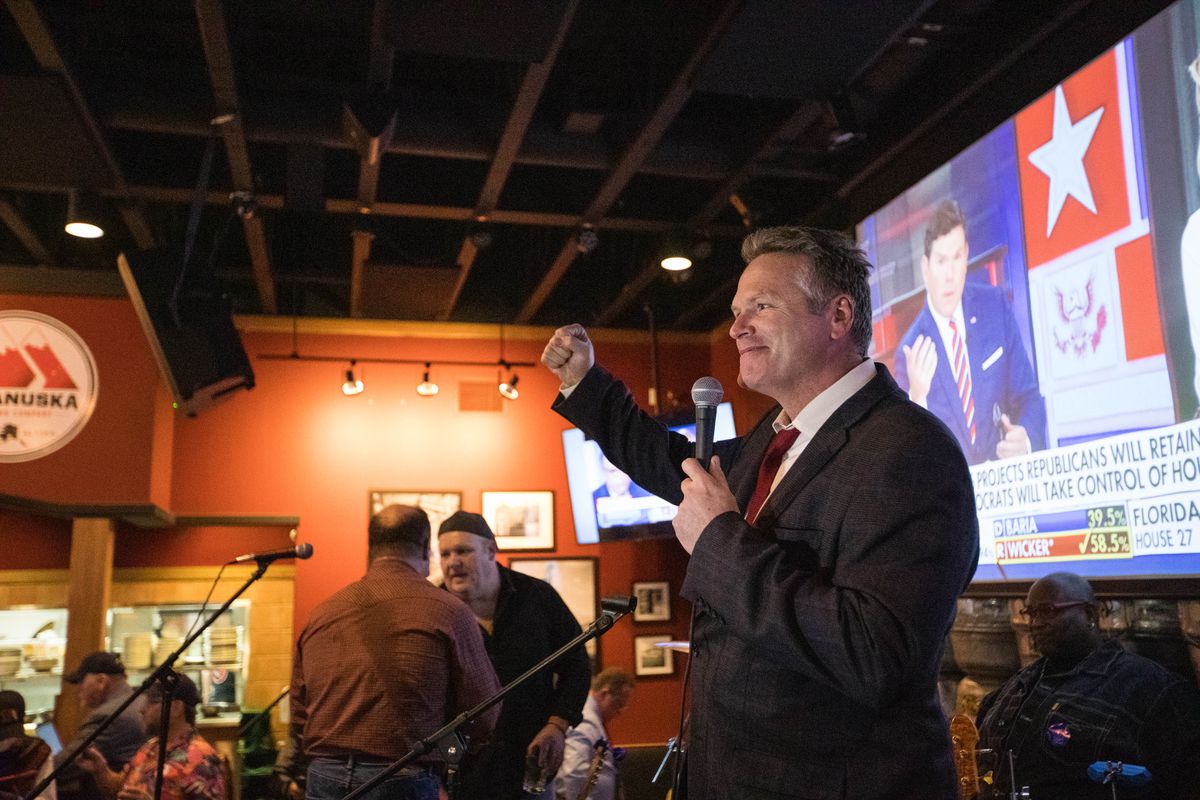 Mike Dunleavy speaks to a crowd at a Republican Party celebration on election night, Tuesday, Nov. 6, 2018 at the Anchorage Alehouse. (Loren Holmes / ADN)

Mike Dunleavy speaks to a crowd at a Republican Party celebration on election night, Tuesday, Nov. 6, 2018 at the Anchorage Alehouse. (Loren Holmes / ADN)

Dunleavy, a former state senator from Wasilla, won decisively over Democrat Mark Begich, who conceded Wednesday. With 98 percent of precincts reporting, Dunleavy had 52 percent of the vote to Begich's 44 percent.

Dunleavy will announce "several members of his transition team, and cabinet appointments" on Thursday, according to an email from his team Wednesday.

With Dunleavy's win, the Alaska Republican Party will take back the governorship after four years of an independent in office. Republicans are also poised to hold the majority in the state House and state Senate. With Alaska U.S. Rep. Don Young notching yet another re-election Tuesday, Alaska's congressional delegation remains all Republican.

"I think when you have an alignment with the governor, the congressional delegation and the White House, it bodes really well for the state," Alaska U.S. Sen. Dan Sullivan said Tuesday at a Republican election party in Anchorage.

All three of Alaska's congressional members, including Sullivan, had endorsed Dunleavy.

[Map: How Alaskans voted in the 2018 governor's race, precinct by precinct]

Begich sent out a brief statement through his campaign Wednesday morning. He said he had spoken to Dunleavy on Wednesday morning "to congratulate him on being Alaska's next governor." Begich encouraged Alakans to stay engaged and make their voices heard.

Dunleavy originally had a news conference scheduled for Wednesday afternoon to announce cabinet appointments, but it was postponed to Thursday. Sarah Erkmann Ward, a member of Dunleavy's transition team, said in a text message that Dunleavy has "been fighting a bad cold for a few days, and it caught up with him today."

Ward did not return calls Wednesday. Begich's campaign manager, Nora Morse, said Begich was not available for an interview Wednesday or in the next few days.

"Our statement is just going to be what it is," she said.

The ballot count so far includes early votes cast through Monday and absentee ballots logged and reviewed up until Friday. Samantha Miller, a spokeswoman with the Division of Elections, said she didn't know Wednesday exactly how many ballots remain to be counted, including the number of questioned ballots. Absentee by-mail ballots had to be postmarked by Election Day.

"Congratulations, Governor-elect Dunleavy, for earning the responsibility of becoming Alaska's next Governor. It has been the honor of a lifetime to serve our state," Walker's message said. "Our team stands by to support you and your staff, and to guarantee a smooth transition for Alaska."

Walker had been running for re-election until Oct. 19, when he made a surprise announcement that he was suspending his campaign. That came three days after his former Lt. Gov. Byron Mallott abruptly resigned after making unspecified "inappropriate comments" to a woman.

In his announcement about ending his campaign, Walker threw his support to Begich. Last week, Walker said he voted for Begich, and said that the Democrat was better for Alaska than Dunleavy.

But Walker, the only independent governor in the country, didn't formally withdraw as a candidate by the September deadline to do so. His name, and Mallott's, remained on the ballot. Walker ended up with about 2 percent of the vote with most precincts reporting.

Before Walker withdrew from the race, some voters had raised concerns about the incumbent and Begich splitting votes in a three-way governor's race, handing Dunleavy a win. Some pressured Begich to drop his bid.

Begich had jumped into the governor's race at the last minute, submitting his paperwork on the day of the filing deadline in June. Dunleavy had filed his paperwork to run for governor nearly a year earlier, in July 2017.