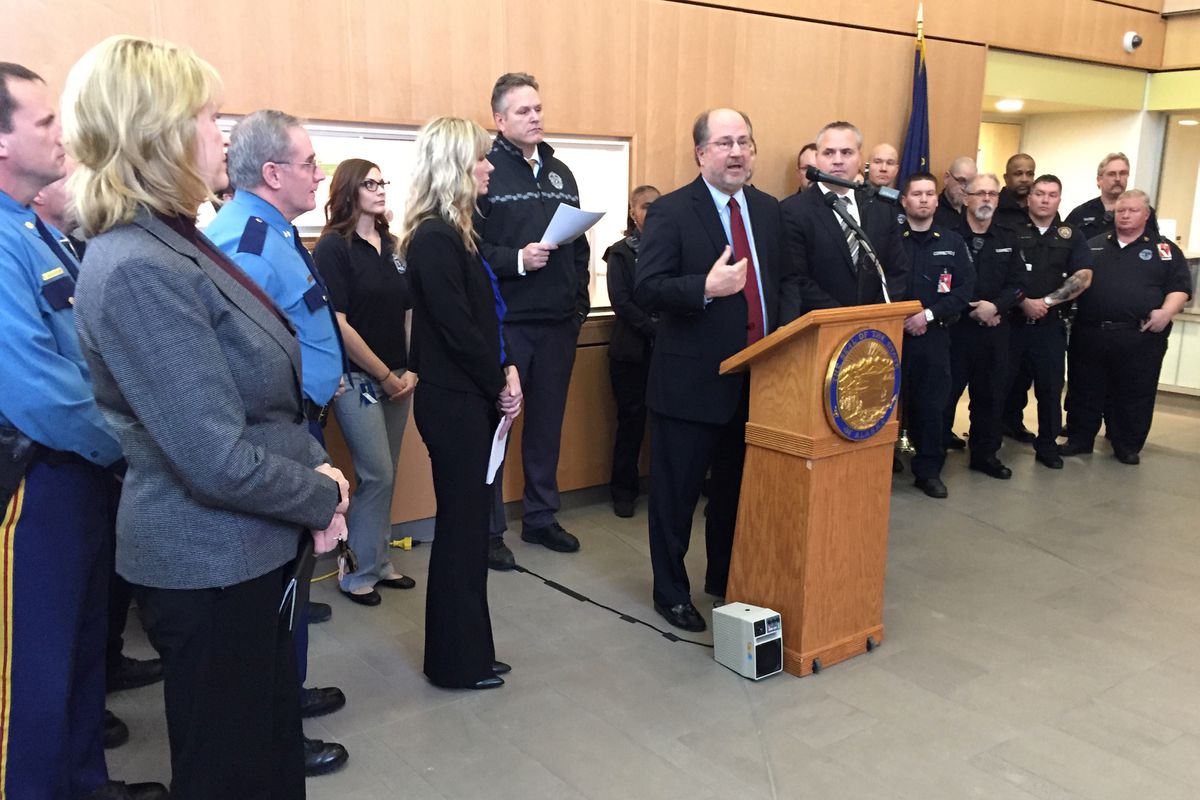 Clarkson has an extended history of backing conservative Christian interpretations of the law in fights against the state government, while Price is a former director of Standing Together Against Rape who became a campaign manager for Dunleavy during his election for governor.

Dahlstrom is a former legislator who was expected to return to the Legislature after winning a seat this fall. Instead, Dunleavy will appoint a replacement.

Crime was a dominant theme in state elections this year, and Dunleavy noted Wednesday that he made public safety his top priority.

Dunleavy’s announcement of Dahlstrom for corrections will have ripple effects throughout state government: In November’s general election, she was elected to replace Rep. Dan Saddler, R-Eagle River, in House District 13.

By taking a commissioner job, she will not fill that legislative seat. Instead, the district’s Republican Party organization will submit a list of candidates, and Dunleavy may select the legislator from that list. The governor’s choice must be approved by House Republicans in order to become effective.

Saddler, the incumbent, had decided against a re-election bid in order to run for the Alaska Senate seat held by Sen. Anna MacKinnon, R-Eagle River, who did not run for another term. He lost the Republican primary to Rep. Lora Reinbold, R-Eagle River, who also won the general election.

Reached by phone Wednesday, Saddler said he is “probably not” going to apply for the vacancy, and that he is considering another job.

Joshua Wilson, a business agent with the Alaska Correctional Officers Association, said that while Dahlstrom may not have hands-on corrections experience, she does have knowledge from her time as a legislator, and she has chosen deputies who do have experience with the prison system.

Clarkson has practiced law in Alaska for more than 30 years, since graduating from Willamette Law School in 1985 with honors. He speaks Spanish and has four adult children.

He has been a frequent backer of Republican and religious-liberty causes at court. In 2010, he unsuccessfully argued in favor of a ballot measure that would have required parents to be notified if their child under 18 sought to have an abortion.

He represented the Anchorage Baptist Temple in a case over a tax-exempt home. More recently, he represented the Kenai Peninsula Borough in a lawsuit against the borough’s prayer policy at public meetings. He also has represented Republican plaintiffs in a court case that sought to overturn some of Alaska’s limits on campaign contributions.

His work has garnered him praise from the Alliance Defending Freedom, a group devoted to a Christian interpretation of American law.

“Kevin’s life incorporates an extraordinary combination of top-notch legal skills with a burning desire to serve God in his practice,” said Joe Infranco, a senior counsel for ADF, in a statement announcing a distinguished-service award for Clarkson. “He has emerged as one of the leading luminaries in the ﬁght for religious freedom in Alaska.”

Michael Geraghty, attorney general under Gov. Sean Parnell (himself an adviser to Dunleavy) said he doesn’t know Clarkson personally, but said he has a good professional reputation.

“I think he’s just a fine attorney, and I hold him in the highest professional regard, and I think he respects the department of law and will be a conscientious AG,” Geraghty said.

Bruce Botelho, a Democrat and the attorney general under former governors Wally Hickel and Tony Knowles, had similar things to say.

“Kevin is a very competent attorney. Obviously, he has a political philosophy different than mine, but I think what is most important is that the governor have a person with a very good legal mind and a strong sense of ethics,” Botelho said.

Clarkson has repeatedly applied for judgeships in Alaska, and under Alaska’s nonpartisan merit-based judicial selection process, judge candidates are subject to surveys of Alaska’s registered lawyers.

In 2016, when Clarkson applied to replace Dana Fabe on the Alaska Supreme Court, those lawyers gave him the lowest overall ranking among the eight applicants. Clarkson received 2.7 points on a 1-5 scale from among attorneys who had direct professional experience with his work. That score, according to the survey, indicates “insufficient qualifications for this position.”

Price, the new head of the Department of Public Safety, was Dunleavy’s deputy campaign manager before leaving to become manager of Edie Grunwald’s lieutenant governor campaign. She is a former executive director of the nonprofit Standing Together Against Rape and in 2015 was named a crime policy and prevention adviser to Gov. Bill Walker.

In addition to the lead figures in the three departments, Dunleavy announced several deputies. Michael Duxbury, captain of the Alaska Bureau of Investigation, will become deputy commissioner for public safety. Col. Doug Massie will be director of the Alaska Wildlife Troopers, and Maj. Andy Greenstreet — appointed acting head of the Alaska State Troopers under Gov. Bill Walker, will remain in that role.

In the Department of Law, Tregarrick (Treg) Taylor, senior attorney for Arctic Slope Regional Corp., has been named the deputy attorney general in charge of the civil division. Taylor unsuccessfully ran for Anchorage Assembly in 2016, losing to John Weddleton.

At the Department of Corrections, Leitoni Tupou has been named a deputy commissioner, as has Dan Carothers. Both have extensive experience with the department. Tupou, born and raised in Tonga, started his career as a correctional officer in Juneau and worked his way up the ranks to become director of the division of institutions. Carothers likewise worked his way up the ranks, moving from correctional officer to prison superintendent at Lemon Creek Correctional Center in Juneau before retiring. He owns Alaska Polygraph Inc.

Correction: An earlier version of this article incorrectly reported the results of the Alaska Bar Association survey of Kevin Clarkson. The rating of 2.7 out of 5 was from attorneys with direct professional experience of his work, not all attorneys.