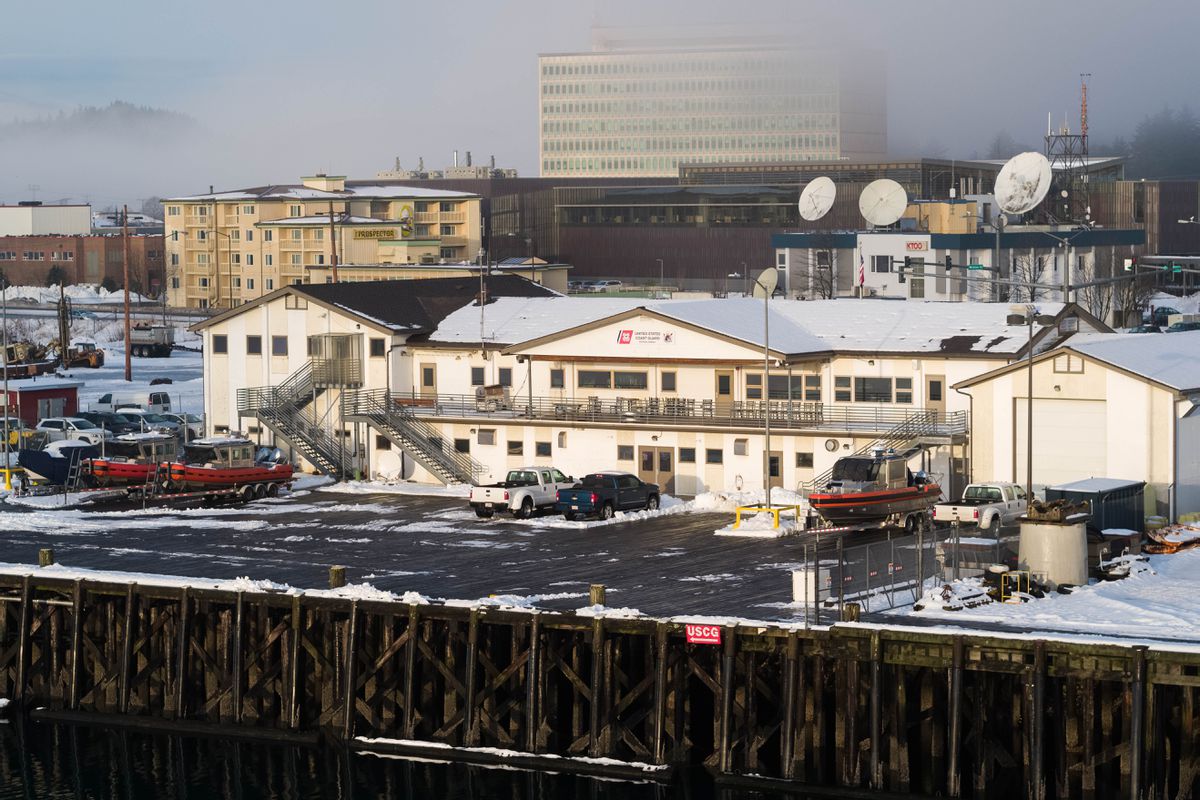 The Coast Guard Station Juneau, with the federal building behind, on Tuesday, Jan. 15, 2019. (Loren Holmes / ADN)

The Coast Guard Station Juneau, with the federal building behind, on Tuesday, Jan. 15, 2019. (Loren Holmes / ADN)

He called the service members the hardest-hit of federal employees affected by the unprecedented lapse in government funding.

“I just got out of a fairly lengthy meeting with the president in the Oval Office,” Sullivan said. “We talked about this, and he said he’s supportive of the bill."

Sullivan pushed for the bill’s passage in a speech on the Senate floor Tuesday, the same day Coast Guard personnel nationwide missed their first paycheck during the closure.

“As you know, the partial government shutdown is negatively impacting federal workers, but none, none more so than the brave men and women of the U.S. Coast Guard," said Sullivan, chair of the Senate Commerce subcommittee on Security, with jurisdiction over the Coast Guard.

The measure is not enough, said Dave Owens, Alaska representative for the American Federation of Government Employees union.

Sullivan and the Alaska delegation need to end the partial government shutdown now so all 800,000 affected federal employees get paid, Owens said.

More than 5,000 federal workers in Alaska, not counting the Coast Guard personnel, missed their first paycheck on Friday in a record-long shutdown that has dragged on close to a month, he said. Like the Coast Guardsmen, many of those federal employees are working without pay, such as forecasters with the National Weather Service.

Civilian workers with the Coast Guard weren’t covered in the latest bill draft on Wednesday afternoon. Owens said that will hurt many Alaskans who work alongside Coast Guard military personnel, including a large group of firefighters supporting activities at the Coast Guard base in Kodiak.

“They’re all Alaskans, and the last time I checked the senator represents Alaskans,” Owens said.

“This is insane,” Owens said of a shutdown with no end in sight.

Sen. Lisa Murkowski said Wednesday on Twitter there’s no reason the Coast Guard or any of the nation’s federal workers should “be held hostage due to a political dispute.” She said she’ll keep working to end the shutdown.

There's no reason for our 5th military branch or any of the thousands of other furloughed federal employees & contractors to be held hostage due to a political dispute. As @USCG members continue to put their lives on the line to keep us safe & secure, I'll continue to do my part. https://t.co/lqureVghQw

Like the other branches of the U.S. military, active duty @USCG should be paid for their service and sacrifice to this nation. I’m working with the @WhiteHouse and Congress to pass legislation to fund the @USCG now.

He said the cross-aisle support for the bill could be a template for a broader effort to end the shutdown.

The president recognizes the unique situation the Coast Guard faces, he said.

“The Army, the Navy, the Air Force, and the Marines are all out there risking their lives for our nation," Sullivan said in his floor speech, referencing military branches funded by the still-open Department of Defense. “We greatly appreciate that. And guess what. They are getting paid to do it, as they should be. But the Coast Guard members are also out there risking their lives, especially in my state.”

“By the way, if they want to just go quit, they are going to be court-martialed. That is different than other federal service,” Sullivan said.

Sullivan has said he supports Trump’s effort to expand the border wall with $5.7 billion in funding -- the catalyst for the impasse with Democrats. The senator said last week greater border security is needed to stop a “humanitarian crisis” that’s tied to the nation’s opioid epidemic and “evil” human traffickers who lead children into “lives of hell.”

Sullivan said the nonpayment of Coast Guard members was apparently the first time that military service members weren’t paid during a shutdown.

“We need to treat all members of the military, all five branches, the same: pay, retirement, shutdowns,” Sullivan said on the floor.

Sitka resident Sarah Lamb, a wife and mother of active-duty Coast Guard members, said Wednesday her family will be happy for the paycheck if it comes.

But she feels for all federal workers who aren’t being paid. Her family used their last paychecks to pre-pay bills, “biting” into savings. Others have it harder, and she’s working with Coast Guard officials in Sitka to find help for federal employees in need.

A GoFundMe page was created Sunday to buy food for Coast Guard employees in Alaska towns.

“They need to get this figured out,” she said of Congress.