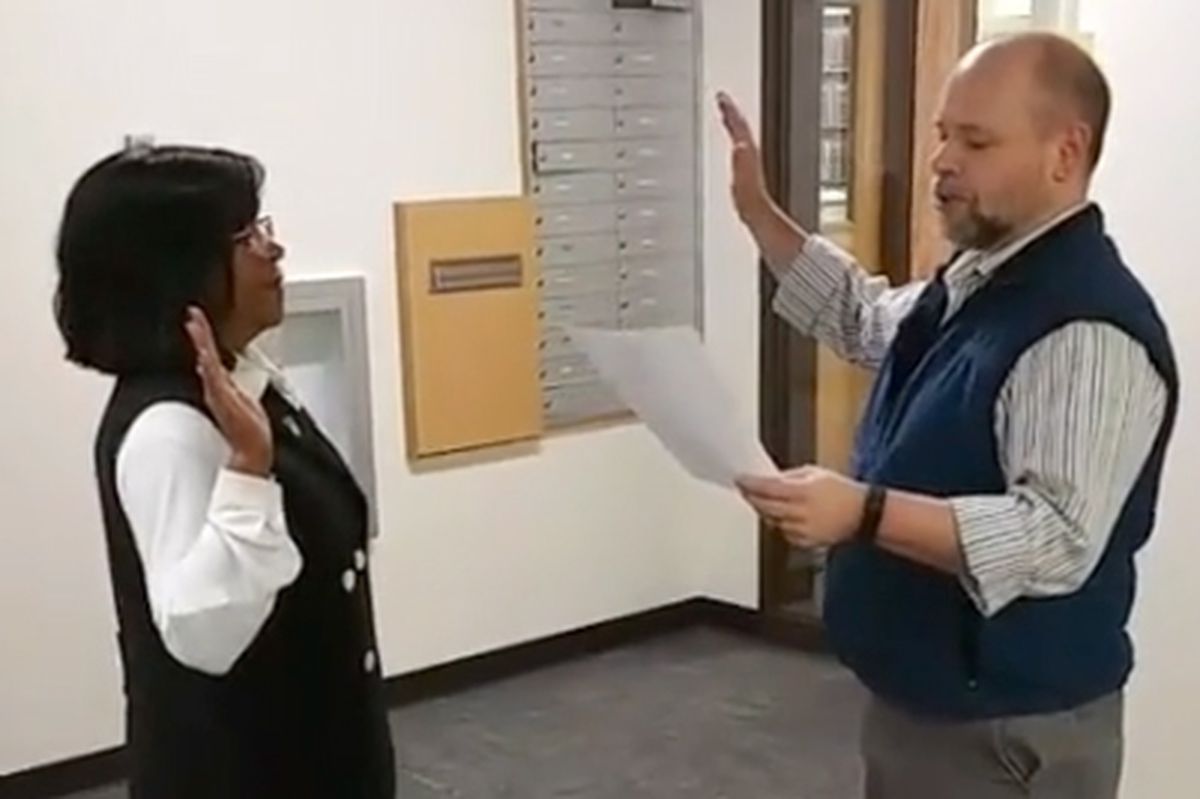 Representative-designee Sharon Jackson takes an oath of office at the Juneau courthouse on Wednesday, Jan. 16, 2019. Jackson was nominated by Gov. Mike Dunleavy to fill a seat vacated by Nancy Dahlstrom, but she was not sworn in on the first day of the session because the House could not agree on a majority. (Rep. Joshua Revak / Facebook)

Representative-designee Sharon Jackson takes an oath of office at the Juneau courthouse on Wednesday, Jan. 16, 2019. Jackson was nominated by Gov. Mike Dunleavy to fill a seat vacated by Nancy Dahlstrom, but she was not sworn in on the first day of the session because the House could not agree on a majority. (Rep. Joshua Revak / Facebook)

JUNEAU — With the Alaska House of Representatives leaderless and deadlocked through a second day, state Rep.-designee Sharon Jackson abandoned legislative procedure Wednesday and took her oath of office from a clerk in the basement of Juneau’s Dimond Courthouse.

Accompanied by Rep. David Eastman, R-Wasilla, and filmed on Facebook Live by Rep. Josh Revak, Jackson’s move caught most of her fellow lawmakers by surprise and is likely not legally binding.

“I knew when I saw it on Facebook. I didn’t even know it was Facebook I was seeing, because I asked someone, well, how many people know? And they’re like, ‘that’s Facebook Live.’ I’m like, oh, I guess it’s too late for that question,” said Rep. Tammie Wilson, R-North Pole.

In a prepared statement, Talerico said, “While the sentiment of this effort to get Ms. Jackson seated quickly is appreciated, the House Republicans anticipate the official swearing-in of Ms. Jackson to take place on the House floor, as in accordance with Alaska Statutes and the Constitution, and we look forward to welcoming her to the body as soon as possible.”

“It had an impact, yes. We had been engaged in very earnest discussions today,” Edgmon said.

He has also requested a legal opinion on the swearing-in.

Jackson was in meetings for most of the afternoon, but the Daily News reached her as she prepared to leave the Capitol for a Legislative reception. She said she took the move alone and in order to represent her constituents more quickly.

“No one had anything to do with the decision that I made. No one. No one knew it. I apologize, but District 13 deserves to be represented as soon as possible,” she said.

The Alaskans who live in the portion of Eagle River covered by House District 13 have been without House representation since the resignation of Rep. Dan Saddler, R-Eagle River, in December. Nancy Dahlstrom won the race to replace Saddler, but she — like Saddler — chose to join the new administration of Gov. Mike Dunleavy instead. To fill the vacancy left by Dahlstrom, Dunleavy selected Jackson.

Because Jackson was appointed and not elected, the process for her to join the Legislature is somewhat different and is believed to require the appointment of a House leader beforehand. The exact process is the subject of much debate in the House due to differing interpretations of legislative rules, the law and the Alaska Constitution.

Revak, who filmed Wednesday’s proceedings, said he and Jackson know each other from when they worked together for U.S. Sen. Dan Sullivan, R-Alaska.

“This was completely her … decision, and according to the law, it was a legal way to get sworn in. She was adamant about it, and good for her to represent her constituents that way,” Revak said.

Revak and Wilson each said Jackson’s move would give representation to the residents of Eagle River.

Revak attributed the idea behind Wednesday’s actions to Eastman.

“They had met in the hallway, and she had asked him, well, how come I can’t be sworn in? And he said, well, you can, and he referred the law to her,” Revak said.

By phone, Eastman said he “can’t claim the inspiration” but did say they he had a conversation beforehand and was happy to join her on the walk to the courthouse across the street from the state Capitol.

“I think it should’ve happened yesterday,” Eastman said of Jackson joining the Legislature.

The law in question Wednesday is Alaska Statute 09.63.010, which lists the officials who “may take an oath, affirmation, or acknowledgment in the state.”

On the list are notaries, court clerks, postmasters and other state officials.

“All they do when they do that, they say this person signed this oath in my presence,” explained Doug Wooliver, deputy administrative director for the Alaska Court System. “That’s all it says: They signed this. They’re not saying you’re now a legislator or you’re now a governor. They’re saying they just signed this oath.”

Some of the House’s Democrats and its lone independent said they were still processing Wednesday’s events.

“We’re certainly not opposed to having her sworn in,” said Rep. Dan Ortiz, I-Ketchikan.

“I’m happy to get her sworn in, but I do want things to get done the way they’re supposed to get done,” said Rep. Andy Josephson, D-Anchorage.