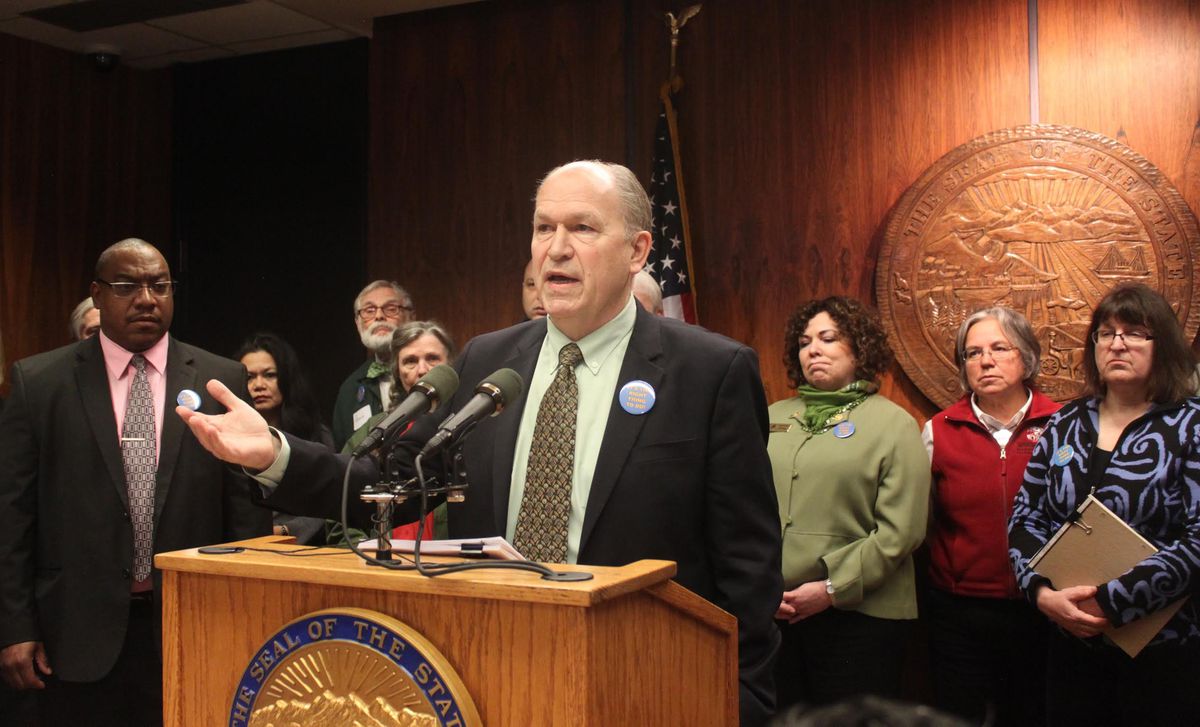 Governor Bill Walker speaks about the Medicaid expansion and reform bill he unveiled at a Capitol news conference in Juneau on Tuesday, March 17, 2015. Behind him are members of his administration and supporters of Medicaid expansion.

Governor Bill Walker speaks about the Medicaid expansion and reform bill he unveiled at a Capitol news conference in Juneau on Tuesday, March 17, 2015. Behind him are members of his administration and supporters of Medicaid expansion.

Repealing Medicaid expansion would pull more than a half-billion dollars out of Alaska’s economy and likely extend what is already the longest recession in the history of the state, according to an analysis commissioned by one of the state’s leading health care groups.

The report for the Alaska State Hospital and Nursing Home Association concludes that repealing Medicaid services for the expanded class of eligible recipients from Alaska’s Medicaid program would have a negative economic impact of $556 million. In turn, Alaska would lose 3,690 jobs, according to the report done by Halcyon Consulting released Feb 11.

More than 1,800 of those jobs would come out of hospitals, private practice offices, outpatient centers and other health care providers. Dental offices would lose an estimated 174 jobs, according to the report, while smaller, secondary impacts would be felt through job losses in the real estate, air transportation and other sectors.

The next day, on Feb. 12, House Democrats released an analysis from Legislative Legal Services that concludes it would take a statutory change for Gov. Mike Dunleavy to roll back Medicaid expansion.

According to the Legislative Finance Division, overall spending on Medicaid in Alaska has increased from $1.7 billion to more than $2.3 billion since fiscal year 2015, but the state’s portion of that has actually gone down from $724 million in 2015 to $677 million, which includes a $15 million supplemental budget request, in the current fiscal year.

Economists generally expect Alaska will come out of the current recession, which started in late 2015, towards the end of this year.

The state Labor Department is officially forecasting Alaska will add approximately 1,400 jobs this year after losing roughly 12,000 over the last three-plus years.

However, if and when Alaska’s economy rebounds will largely depend on how legislators and Dunleavy resolve the state’s roughly $1.6 billion budget deficit projected for the 2020 fiscal year that begins July 1.

The health care sector — partly driven by new Medicaid expansion funding started in fall 2015 — has defied overall state economic trends and added roughly 3,700 jobs, for about 11 percent growth, since 2015, according to Labor statistics.

The longstanding policy debate over whether the State of Alaska should offer Medicaid to individuals who now qualify for it under the expanded eligibility guidelines of the Affordable Care Act has been at the forefront of state politics since former Govs. Sean Parnell first rejected Medicaid expansion in November 2013 and Bill Walker accepted it in 2015.

Proponents highlight the fact that procedures and other costs for expanded-class Medicaid recipients are covered by at least 90 percent federal funding with a corresponding 10 percent state general fund match; a matching rate similar to federal transportation funding programs Alaska routinely attempts to maximize.

Costs for more traditional Medicaid recipients are covered 50-50 by the feds and the state, while Medicaid coverage for Alaska Natives is paid 100 percent by the federal Indian Health Service.

Expansion detractors argue the program simply adds to overall government health care costs for individuals — low-income, working-age adults — who were never intended to be covered by Medicaid when it began. There also are no assurances the federal expansion-class support won’t be arbitrarily reduced at some point, then leaving the state to pay more, they contend as well.

Halcyon Consulting founder and longtime Alaska economist Jonathan King said in a formal statement that the projected negative impact of repealing Medicaid expansion would mostly be a result of lost federal funds.

“Elected officials can debate the politics of the issue, but not the numbers; economic analysis shows how rejecting these federal dollars would hurt Alaska’s economy,” King said. “Our economy is too fragile (to) absorb this size hit without extending the recession.”

According to the report, strictly cutting Medicaid expansion would pull, based on fiscal 2018 figures, $420 million from the state budget, result in $283 million in lost wages from 4,041 fewer jobs across the state and have a cumulative negative economic impact of $627 million. However, the report presumes that a small portion of the expansion population would then find health insurance through another means, thereby lessening the net negative impact.

Alaska State Hospital and Nursing Home Association CEO Becky Hultberg said she has not heard of any specific plans from the Dunleavy administration to repeal Medicaid expansion or make other wholesale changes to the state’s program, which includes many optionally covered services and procedures, but noted administration officials have stressed that everything is “on the table.”

A spokesman for Dunleavy did not return a request for comment in time for this story.

In addition to Walker accepting federal funding for Medicaid expansion in 2015 — then 100 percent federally funded — despite attempts by the Republican-controlled Legislature to stop him in court, in 2016 the Legislature passed a Medicaid reform package aimed at reducing the state’s annual bill.

The state’s savings in that bill were estimated at the time to total more than $365 million over six years, with most of that coming from targeted efforts to and maximize the value of the state’s Medicaid matching funds shift state costs to the federal government.

The state has also reduced its Medicaid reimbursement rates paid to providers.

“I think the question for not just our state but for our country is: How do we take care of people and do it in a fiscally sustainable way?” Hultberg said. “We have lots of conversations about how we do one or the other but the reality is that we have an obligation to do both.”

She added that the U.S. already provides health care to people who can’t afford it but that care usually comes via emergency departments; often the least effective and most expensive way it can be provided.

While the federal money for expanding Medicaid services was accepted with executive authority, the governor cannot selectively reject Medicaid funding without a change to state law, at least according to an opinion offered by the nonpartisan Division of Legislative Legal Services.

The Democrat-led House coalition on Feb. 12 released a memo from Legislative Legal Director Megan Wallace that states, “given the precedent in Alaska, without a substantive law change, if the governor refused to accept all or part of the federal funding for Medicaid expansion, that act alone would not be enough to reverse Medicaid expansion.”

The memo is dated Dec. 6 and addressed to then Rep.-elect Zack Fields, D-Anchorage.

Gov. Walker in 2015 accepted the expansion money by invoking state statutes that call for all Alaskans who are eligible for federal Medicaid coverage to be offered that coverage and allow the governor to accept federal program recipients in excess of what the Legislature appropriated for as long as the appropriation was made in the budget.

In other words, the governor can authorize the state to spend more federal money than the Legislature planned for as long as the new money is going to an existing appropriation.

An Alaska Superior Court ruling upheld that authority in a subsequent lawsuit led by Republican legislators against Walker over the issue.

However, according to Wallace, the governor cannot parse out and reject the Medicaid expansion funds — or any other subset of federal Medicaid funding for that matter — because all Medicaid funds are lumped together in a single $2 billion-plus “Medicaid Services” appropriation in the budget.

“Medicaid expansion cannot be stopped through the failure to accept or appropriate full funding, it would instead impact all Medicaid services,” Wallace wrote.

As a result, any restrictions on how Medicaid funding can be spent must come through a law change, according to Wallace.

Officials in the Dunleavy administration have said a suite of separate but related bills will accompany their much-anticipated budget release Feb. 13 to address formula funded programs and other issues.