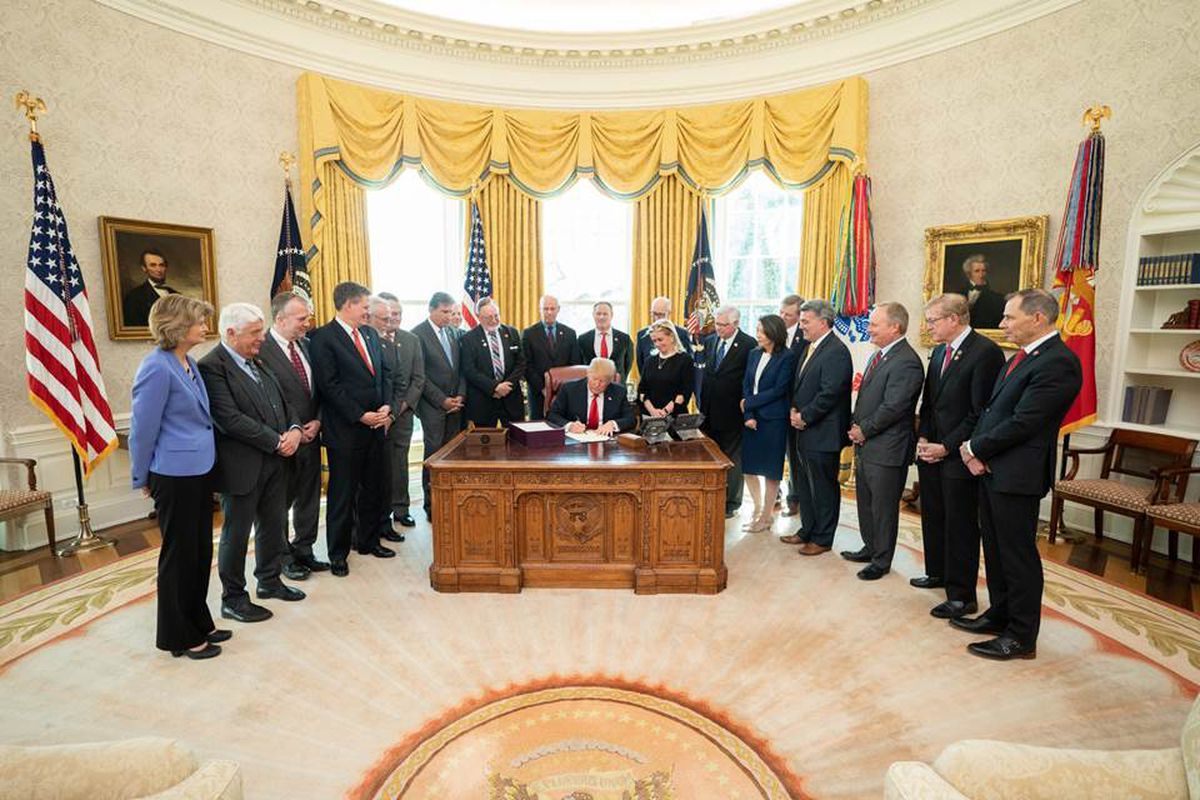 A major bipartisan public lands bill signed into law by President Donald Trump on Tuesday includes several Alaska-specific provisions that will impact everything from the routing of a potential gas line to the way Alaska pays for the operation and maintenance of state parks.

But among the most significant, Alaska’s senators agree, is a provision that would pave the way for 2,800 Alaska Native veterans to claim promised land allotments they missed out on while serving in the Vietnam War, ending a long-running effort to right what Sen. Dan Sullivan called a “historical wrong.”

The package of legislation signed Tuesday is known as the John D. Dingell, Jr. Conservation, Management, and Recreation Act.

It includes some 120 bills and has been called the most sweeping public lands bill in a decade or more. It’s been heralded as a rare example of bipartisan cooperation in Congress.

The legislation will do everything from creating new wilderness areas in Oregon, California and Utah to reauthorizing a major program to funnel federal funds to operate and maintain state parks.

Ten of the package’s bills are Alaska-specific. Some could have wide-ranging impacts, and some are so granular they only touch a single village — or in one case, four people.

They range from the Kake Timber Parity Act, which allows the Kake Tribal Corp. to export unprocessed logs, to the Ukpeagvik Land Conveyance, which will give the North Slope community a new revenue source by conferring rights to sand and gravel within the Barrow Gas Field to the Ukpeagvik Iñupiat Corp.

“Some of these are ... not very significant around the state, but significant for the individual region,” Murkowski said in a call with Alaska reporters Tuesday afternoon.

• A federal study of “effects that federal land acquisitions have had on Chugach Alaska Corporation’s ability to develop its lands.” Agencies would also have to identify “options for a possible land exchange” with the corporation.

• Re-authorization of the Land and Water Conservation Fund, a key source of federal funding for cash-strapped state and local parks.

A full list of the act’s Alaska-specific provisions can be found here.

It will allow Alaska Native veterans who couldn’t apply for an allotment of 160 acres of land — which was guaranteed by a 1906 law — because they were overseas serving in Vietnam a chance to do so now.

Alaska’s congressional delegation has been working on the issue for decades, and the applications opened briefly in 1998 but with heavy restrictions, said Sullivan. Some people were still left out.

The version signed into law Tuesday allows heirs of eligible veterans to also claim the allotments. About 2,800 people or their heirs would be eligible, according to an estimate from Sullivan’s office.

Sullivan’s office estimated that it would impact just 0.2 percent of federal lands in Alaska if every eligible claimant filed for land.

The deal didn’t come without compromise. The veterans or their heirs will be able to select from Bureau of Land Management lands, but not from the Tongass National Forest, Arctic National Wildlife Refuge and other lands that Senators had pushed to be included.

The Tongass exclusion was of particular concern to Southeast Alaska veterans, who will have to look outside their region for eligible land, Sullivan said.

George Bennett Sr., a Sitka carver, liaison to rural veterans and former president of the Alaska Native Veterans Association, said there are still a lot of details to be worked out about the land allotment.

He said he regrets that his organization wasn’t able to hire a lobbyist to push for more lands to be considered for allotments.

But after so long, it feels good to see the new policy signed into law.

“It has been so many years we’ve been working toward this,” he said.