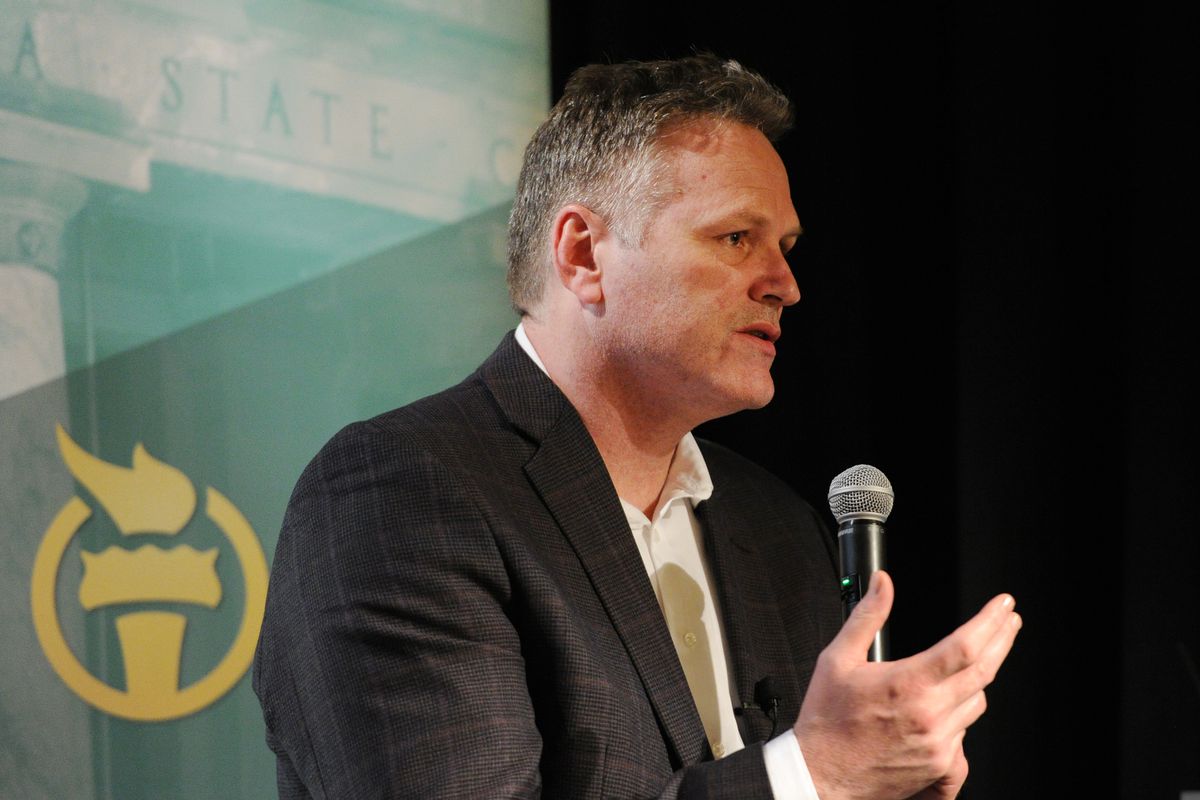 Gov. Mike Dunleavy’s budget road show with Americans For Prosperity rolled into Alaska’s biggest city on Tuesday, where some 300 protesters rallied outside a brewery where Dunleavy and his staff described his rationale for giant spending cuts and larger Permanent Fund dividends.

He brought an urgent message to an audience that at times applauded or whistled support: That the current rate of state spending is unsustainable and will put Permanent Fund dividends at risk.

“We have to reduce the size of our budget,” said Dunleavy, speaking to an audience of about 175 at the 49th State Brewing Co. in downtown Anchorage. “If we don’t, we’ll outstrip our ability to pay for this government through the PFD or taxes.”

Protesters occasionally interrupted the event, which was open to the public but ticketed. At one point, two women unfurled a banner reading “Recall Dunleavy” before security guards rushed to escort them out.

The meeting is one of five during the roadshow that are sponsored by the Alaska arm of the anti-tax group, Americans For Prosperity, founded by the billionaire Koch brothers from Kansas.

For the first 75 minutes, Dunleavy and three of his top cabinet members laid out their rationale for his proposed reductions to close Alaska’s $1.6 billion deficit. They described his proposed constitutional amendments, including to control future spending and not allowing new or increased taxes without a vote of the people.

Dunleavy said state spending about a decade ago exploded to unsustainable levels after oil prices and state revenue spiked, and now it’s time to balance the budget.

“If you can get spending in check, you can push taxes off for a couple decades at least,” said Bruce Tangeman, Dunleavy’s revenue commissioner.

One question from the audience asked whether Dunleavy cares about rural Alaska, when his cuts would have a disproportionately harmful effect there.

Another asked why he would reduce education spending so dramatically.

His budget director, Donna Arduin, answered that one, saying Alaska can concentrate on growing educational and other services once he “right-sizes” spending.

“We don’t believe we’re getting bang for the buck” in education, she said.

Dunleavy sat on stage between officials with AFP-Alaska and the Alaska Policy Forum, which helped with hosting the meetings.

An event in Kenai Monday night kicked off the roadshow, which will head to Nome on Wednesday, Fairbanks on Thursday and Wasilla on Friday. It includes Dunleavy’s appearances on radio shows, taking questions from listeners on some of the radio shows, as well as business groups.

Dunleavy announced his roadshow earlier this month as a way to reach out to Alaskans, then disclosed the next day that Americans for Prosperity was sponsoring the five primary meetings around the state.

Dunleavy has said he took the organization up on its offer to host the meetings in an effort to save money. He said he’d do the same for other organizations.

Ryan McKee, state director of Americans for Prosperity-Alaska, read off the audience questions Tuesday night. McKee has declined to say how much the events were costing the organization.

Monday night’s event in Kenai was held in front of a largely friendly audience at The Cannery resort and restaurant, with protesters outside the gate.

In Anchorage, protesters were in much closer proximity, gathered directly outside the downtown brewpub for a rally billed as “Hear our Voice.”

A coalition that included union workers, public education supporters, environmental groups and others concerned about proposed cuts to everything from Medicaid to ferries gathered, waving signs with messages such as “Cut the Koch out of Alaska!”

By 6 p.m., when the event was set to begin, people had gathered on the closed-off block of Third Avenue. Standing in a truck bed decorated with U.S. and Alaska flags, Anchorage Assembly member Forrest Dunbar led the crowd in a chant of “save our state.”

“We have to make sure a governor who has systematically avoided town halls hears our voice,” Dunbar told the crowd.

Dunbar told the crowd not to prevent ticketed eventgoers from entering and to “keep it legal.” As the rally crowd dispersed, the band REM’s song “It’s the End of the World as We Know It (And I Feel Fine)” played.

Many of the protesters waved signs about specific programs, such as the Pioneer Homes and the Alaska Marine Highway System, that face heavy reductions.

One protester, Lorraine Krueger, attended with her 35-year-old son Collin Krueger, who has what she describes as significant physical and cognitive disabilities from congenital hydrocephalus. Krueger said she worried that if the cuts went through, they’d have to leave the state where Collin has lived his entire life.

“It would just decay what little services we have,” Krueger said.

Taylene Odom, a seventh-grader at Goldenview Middle School, said she was attending the rally because she was concerned about proposed cuts to public education. At her school, there can be 30 or more kids to a class, she said.

A few Dunleavy supporters also joined the crowd on the street, including Mike Widney of Big Lake, who held a 6-foot-tall taxi-yellow sign that said “FULL PFD NO TAXES.”

Widney said he’s the founder of savethepfd.org and wanted to make sure supporters of the budget were heard.

Inside the event, held in a banquet hall room, protests occasionally interrupted the meeting. Shortly after it started, one person opened an entry door to shout an obscenity before leaving.

Later, people twice banged on the side door, startling eventgoers.

“Come out here and talk to the people, governor! What are you scared of?” a man could be heard shouting, after security officials opened the door.

The event was contentious before it began. Anchorage resident Steve Thomas, 27, said he was forced outside by two security guards after he wasn’t let in to the event and tried to force his way through.

Thomas said he’d signed up, and had a confirmation email that he showed door staff before the meeting. But his name wasn’t on the list, possibly out of an honest error by AFP-Alaska, he said.

“I don’t think it was conspiracy,” he said. “I wanted to be here because I support the ferry system, an educational system that works, and I want to see the people of this state taken care of.”

Dunleavy addressed the outbursts from the stage.

“I would hope they would want to have an opportunity to vote on these constitutional amendments,” he said. “I’m not afraid to engage the people in this discussion.”

Tom Kizzia in Kenai contributed to this report.