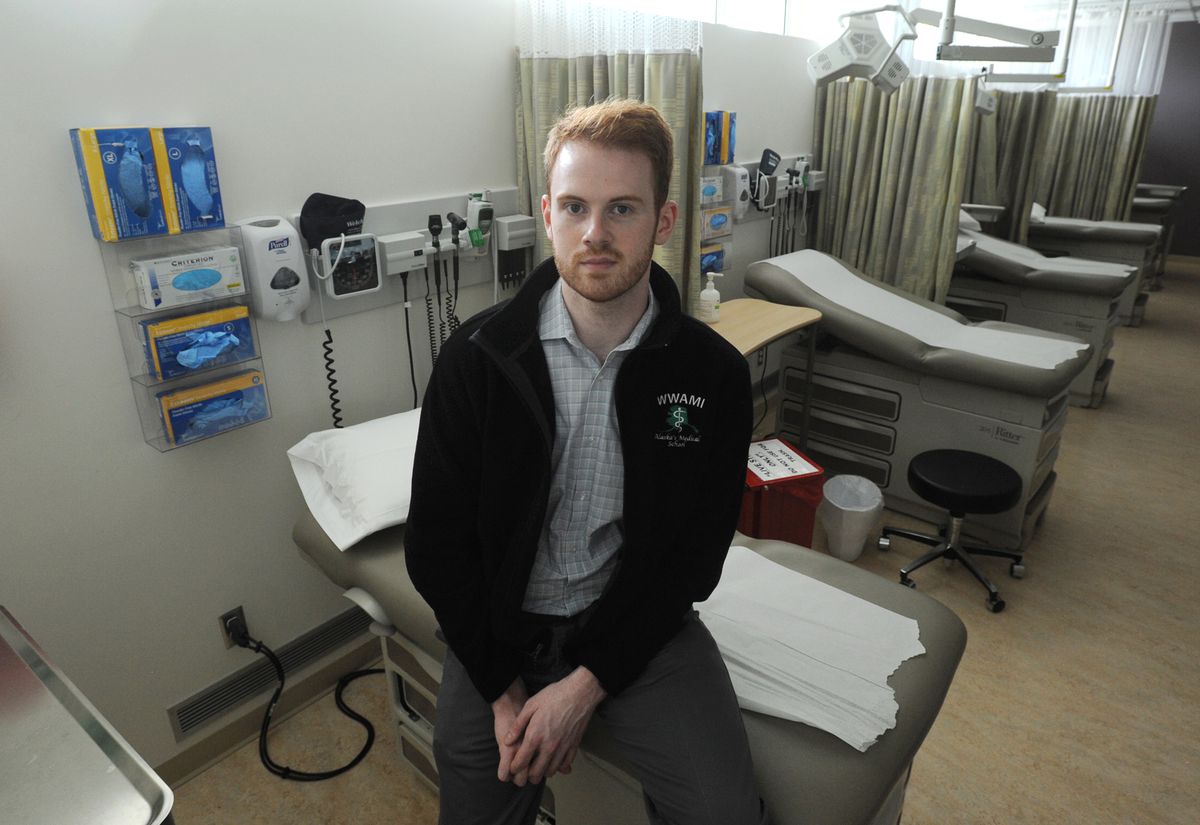 Mack Holmberg of Eagle River is a 4th-year student in the Alaska WWAMI School of Medicine at UAA. (Bill Roth / ADN)

Mack Holmberg of Eagle River is a 4th-year student in the Alaska WWAMI School of Medicine at UAA. (Bill Roth / ADN)

Thousands of Alaska students who earned state-funded college scholarships and educational grants now mired in legislative deadlock are facing hard and immediate choices about their educations.

College students around the state on July 9 received letters saying that three types of scholarships — the Alaska Performance Scholarship, the Alaska Education Grant, and a medical school loan program — could not be paid out.

That’s because the money is caught up in a complicated money-shifting procedure called the “reverse sweep” that the Alaska Legislature has to vote to release it from.

Two weeks later, the legislature has not yet taken action and students still don’t have their scholarship money.

“As of today, we do not have the funds available to make awards,” said Stephanie Butler, the head of the Alaska Commission on Postsecondary Education in an email Monday.

With the fall semester a little over a month away, students are now questioning whether the scholarships will ever come — and if they should take out loans or make other plans. Some are thinking about leaving Alaska.

Among those students: Maile Johnston — the 19-year-old current Miss Alaska.

She found out her Alaska Performance Scholarship wasn’t coming while representing her state as Miss Alaska as part of a cultural delegation to Japan. The loss of a scholarship that paid nearly half her tuition at the University of Alaska Anchorage, where she’s studying biology, has caused “quite a bit of panic,” she said.

Johnston, like other recipients of the scholarship for high-achieving Alaska students, based her college plans partly on getting the money. She chose to return to Alaska after a year out-of-state in part because of the “financial freedom” the Alaska Performance Scholarship would afford her, she said.

“As a working student who pays for my own tuition, books, and fees, these scholarships allow me to focus on my studies without accumulating thousands of dollars in student debt,” Johnston said.

Now the uncertainty over her scholarship combined with a pending cut to the University of Alaska system because of budget vetoes by Gov. Mike Dunleavy may lead her away from the state she will represent in the Miss America pageant later this year.

“I love UAA, but with hopes of going to law school and the opportunities to receive more scholarship money than I will now be receiving from the state, transferring schools a (second) time seems like one of the only viable options,” she said.

The reason the scholarship funds are missing is complicated, and mixed up with a fraught web of budget decisions that the legislature has yet to take action on.

Scholarships are ordinarily paid from the state’s Alaska Higher Education Investment Fund. That fund was expected to contain about $338 million by June 30, according to projections by the university system.

When the state set its budget for the new fiscal year, which began July 1, it expected to spend $11.75 million from the fund on performance scholarships and $3.2 million on the medical loan program.

A clause in the state constitution requires accounts like the education investment fund to be automatically drained into the state’s Constitutional Budget Reserve at the end of each year. To get around that, lawmakers each year pass a procedural vote called the “reverse sweep.” The money gets swept into the budget reserve at 11:59 p.m. June 30, and it gets reverse swept back out at 12:01 a.m. July 1.

But this year, the legislature didn’t complete the sweep — leaving funds for programs including the scholarships in limbo.

The governor’s spokesman blamed the legislature for the holdup.

Dunleavy funded the scholarships and made a proposal to end the impasse over the “reverse sweep” funds but the legislature isn’t going along with it, said the governor’s spokesman Matt Shuckerow Wednesday.

Legislators are the only ones “empowered to fix this," he said.

“There is a way this could be resolved. They’ve chosen not to go down that path.”

That’s true, but in previous years, the state’s Office of Management and Budget — a branch of the governor’s office — did not consider the investment fund to be subject to the sweep, according to documentation provided by the nonpartisan Legislative Finance Division. Under those prior rules, the scholarship funding would have continued even if the reverse sweep failed.

This year, OMB redefined the scholarship fund to make it sweepable, and now it is endangered.

With the funds still in question, students are mired in layers of uncertainty, said Kaitlyn DeMarcus, who works with college-bound first generation and low-income high school students through a program at UAA.

The Alaska Performance Scholarships -- which Alaska high school graduates earn some form of through a combination of grades, rigorous college-prep classes and test scores -- are a powerful driver for top students to stay in state for college, said Kaitlyn DeMarcus, who works with first generation and low-income high school students at UAA.

The scholarships offer up to $4,755 per year for students with a combination of college prep curriculum, GPA and test scores, according to Butler, of the Alaska Commission on Postsecondary Education.

An additional 2,543 students received an Alaska Education Grant scholarship, a form of need-based financial aid, with an average award of $2,301.

Students say they are waiting nervously to see if the funds will be released, or if they should make alternate plans.

Tia Hollowood’s younger son, who just graduated from high school in Anchorage, got a state-funded scholarship to UAA that hasn’t materialized with about a month to go before classes start.

Without the scholarship money, he’s thinking about taking a year off to work instead, she said.

Mack Holmberg, a fourth year medical student in the WWAMI program, said he’d be facing a huge new debt load if scholarships to defray the cost of medical education at the University of Washington partnership program goes away.

“Many of us are under the impression if these things don't go through our costs will increase and we will take our loans,” he said. “More loans to finish school. We can’t stop medical school. We’re literally hundreds of thousands of dollars in debt already.”

Bart Grabman, a second year WWAMI medical student, said it’s not clear whether he should be investigating taking out additional loans or looking for other ways to make up the gap, should the scholarship money not be restored.

“At this point, since we don’t have a concrete answer, it’s hard to say what we should do,” he said. “That answer has been a moving target. "

Students are also asking a here’s a deeper, existential question, said DeMarcus: Beyond the missing scholarship money, students are wondering if the university, facing huge cuts, will continue to offer their degree programs at all.

Reporter James Brooks in Juneau contributed to this story.