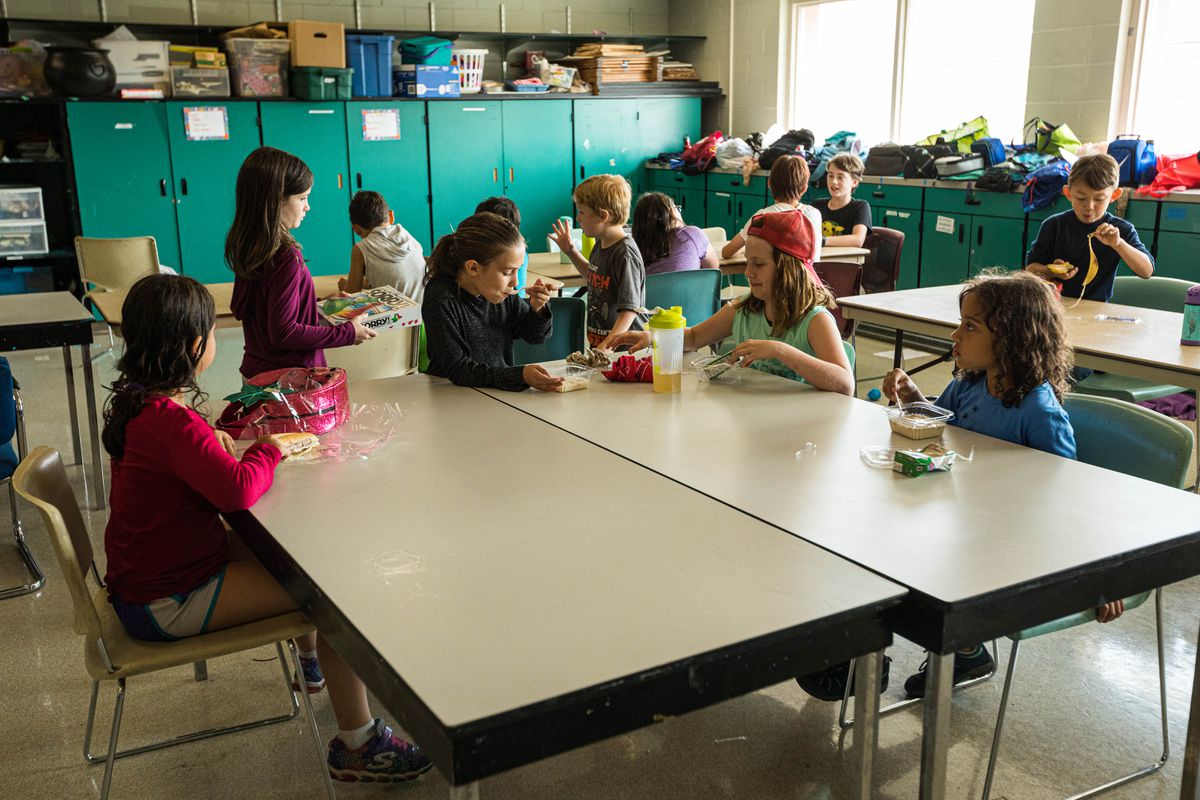 Children eat food provided by the Children's Lunchbox on Tuesday, July 30, 2019 at the Spenard Community Recreation Center during a day camp run by the Municipality of Anchorage. The Children's Lunchbox summer food program provides free food to any child 18 and younger. (Loren Holmes / ADN)

Children eat food provided by the Children's Lunchbox on Tuesday, July 30, 2019 at the Spenard Community Recreation Center during a day camp run by the Municipality of Anchorage. The Children's Lunchbox summer food program provides free food to any child 18 and younger. (Loren Holmes / ADN)

Gov. Mike Dunleavy’s vetoes that radically, and in many cases, unexpectedly cut funding for homeless services, housing programs, pre-K, behavioral health grants, Medicaid and the University of Alaska will be felt heavily by Alaska’s 17,000 low-income families, and poor children will likely carry a disproportionate share of the weight, providers say.

“What these cuts are doing is impacting every aspect of the system that can make it or break it for children and families from a health and well-being point of view,” said Tamar Ben-Yosef, executive director of the All Alaska Pediatric Partnership, a nonprofit that works with health care, community and education organizations on improving child welfare.

Around 42,000 Alaska children live in households receiving some form of public assistance, according to the most recent data from the Alaska Children’s Trust. The state’s cuts will likely touch all of them, a number of providers said in interviews this week.

The cuts have immediate, quantifiable impacts for the more vulnerable among them, such as hundreds of homeless and low-income children likely to lose shelter and low-income children who will lose early childhood education. But beyond that, providers and child advocates say, is a ripple effect that will disrupt nutrition, school attendance, housing stability, access to health care, and whether some children end up in foster care or are able to earn a college degree. The cuts also make it hard for parents because they may impact the availability of child care, education, housing and access to dental care, counseling, psychiatric care and addiction treatment, all of which makes life harder for children.

“It’s the trickle-down effect of this, it’s way more than you can count with numbers,” Ben-Yosef said.

Matt Shuckerow, Dunleavy’s spokesman, did not respond to a request for comment on this story. Dunleavy has repeatedly said the cuts are necessary to bring state spending in line with revenue. A majority of legislators in both houses voted to override his $444 million in vetoes, but the effort failed when they fell short of the three-fourths majority needed to override Dunleavy and restore the cuts. Earlier this week, the House and Senate passed a measure to restore most of the cuts, but Dunleavy has indicated he intends to veto most, if not all, of the money put back into the budget by lawmakers.

Alaska struggled with child health before the cuts

Important well-being measures for children in Alaska have declined in recent years, in particular the percentage of children living in poverty, low birth weights and child death, according to data collected by the Annie E. Casey Foundation. Overall, Alaska is ranked 45th of 50 states for child welfare, according to the foundation’s health indicators. It has fallen from 27th in 2015.

“It’s not that our kids are getting worse, but other states are doing something to change statistics,” said Trevor Storrs, president and CEO of the Alaska Children’s Trust.

These cuts, he said, erode progress the state has made or is planning to make. Data also connect poverty, hunger, homelessness to childhood trauma to other negative social outcomes, he said.

“These cuts are specifically hitting key social determinant areas we know impact the rates of child abuse, neglect, suicide,” he said. “When you combine it together, you are creating a tsunami that is going to devastate our most vulnerable families and work its way up.”

Among the most immediate issues at hand are the closure of Safe Harbor — a 47-unit transitional housing complex for homeless families in Anchorage that may have to shut down in the next three to four months because there is no money to staff it — and Clare House, an Anchorage shelter for women and children, which will no longer be open during the day providing child care for working mothers. There are more than 80 children living at Safe Harbor and more than 50, including 12 infants, living at Clare House. Safe Harbor serves more than 400 people annually.

Clare House is looking for volunteers to help keep the shelter open in the short-term, said Lisa Aquino, head of Catholic Social Services. But, she said, that solution “is not sustainable.” A few families who lose shelter at Safe Harbor could find a temporary solution with Anchorage churches. Four churches have said they are prepared to house 20 people, each taking them for a night at a time, possibly as early as August, said Dave Kuiper, associate director for Christian Health Associates, who coordinates the emergency cold weather shelter system in churches. But that, also, is not enough.

Anchorage Mayor Ethan Berkowitz declared a civil emergency last week because of the cuts, particularly those to homeless services, which are projected to cause between 800 to 1000 people to lose shelter over the next year. On Tuesday the city’s emergency operations center sent out a plea for volunteers and donations to help support shelters and other services.

Medicaid coverage is another factor for child health, though there are many unknowns. The governor originally asked for $233 million in cuts to the funds that receive a large match from the federal government. The Legislature accepted only $70.7 million of those. With his vetoes, Dunleavy cut $50 million more along with $8.3 million in dental coverage, for a total of roughly $129 million in cuts, according to the Legislative Finance Division. Those reductions come on top of a planned reduction of $15.9 million.

It’s not clear where the all the cuts will be made, but there are no plans right now for changes to eligibility for Denali KidCare, the program that covers low-income children, according to Legislative Finance. Certain types of providers, such as specialists and behavioral health providers, will see a reduction in their Medicaid reimbursement. That may, in turn, cause them to stop or see fewer low-income patients, including children, Ben-Yosef said.

The expansion of Medicaid allowed for the coverage of some adults in families where children were covered by Denali KidCare, helping bring access to medical care for parents, Storrs said. Taking that coverage away, especially when a parent has health care needs, can impact all the family finances, having a negative result for kids, he said.

Similarly, cuts to social and health supports for kids, families and older people are expected to increase hunger in the state “exponentially,” according to Eve Van Dommelen, policy and advocacy manager with the Food Bank of Alaska.

“Food is kind of one those budget items that is the easiest to cut first, you don’t really have a choice about what you are paying for housing and utilities and medicine,” she said.

Even before the cuts, the state has struggled to keep all children fed. Roughly one in five Alaska children don’t have enough food, she said.

"Hunger doesn’t exist in a void, it’s tied to everything. ... Kids that can’t eat don’t do as well as in school, that can jeopardize their job prospects,” she said. “It’s really kind of that community impact.”

Dave Mayo-Kiely runs the Child in Transition program for the Anchorage School District, helping homeless students. He’s anticipating more children will need services, though quantifying what that looks like isn’t easy, especially because it’s unclear which of the budget vetoes might be reversed.

“Finding space to do homework is difficult,” he said.

The biggest expense Mayo-Kiely is anticipating is an increase in transportation costs. The program tries to keep students in their same school, even as their parents move around, and gives families gas cards and taxi vouchers to help them, he said.

What happens when families lose shelter is they tend to double up, staying with friends or family in crowded conditions, he said. That has been shown to negatively impact academic success.

“With the reduction of prevention services, there will be families that would have gotten assistance to keep them from entering homelessness who will enter homelessness,” he said.

For 193 recently resettled refugee children in Alaska, the cuts will place barriers on families as they work to integrate into life in America, said Issa Spatrisano, state refugee coordinator with Catholic Social Services’ Refugee Assistance and Immigration Services. On Tuesday she was working with a family that had a family member in need of urgent dental care who lost services to pay for it because of the vetoes. The family had come from a refugee camp, and parents were working. They would have to find the money elsewhere, she said, but that means cutting into other essential things.

In many refugee families, older children also work to contribute to the household. The University of Alaska Anchorage has offered them a way to earn a college degree, she said, which is a major accomplishment for young people whose parents frequently come from places where they were not educated at all.

“The cuts to the university will impact that generational improvement we see in families,” Spatrisano said. “If you decimate the university system, there is no place for these children to go.”