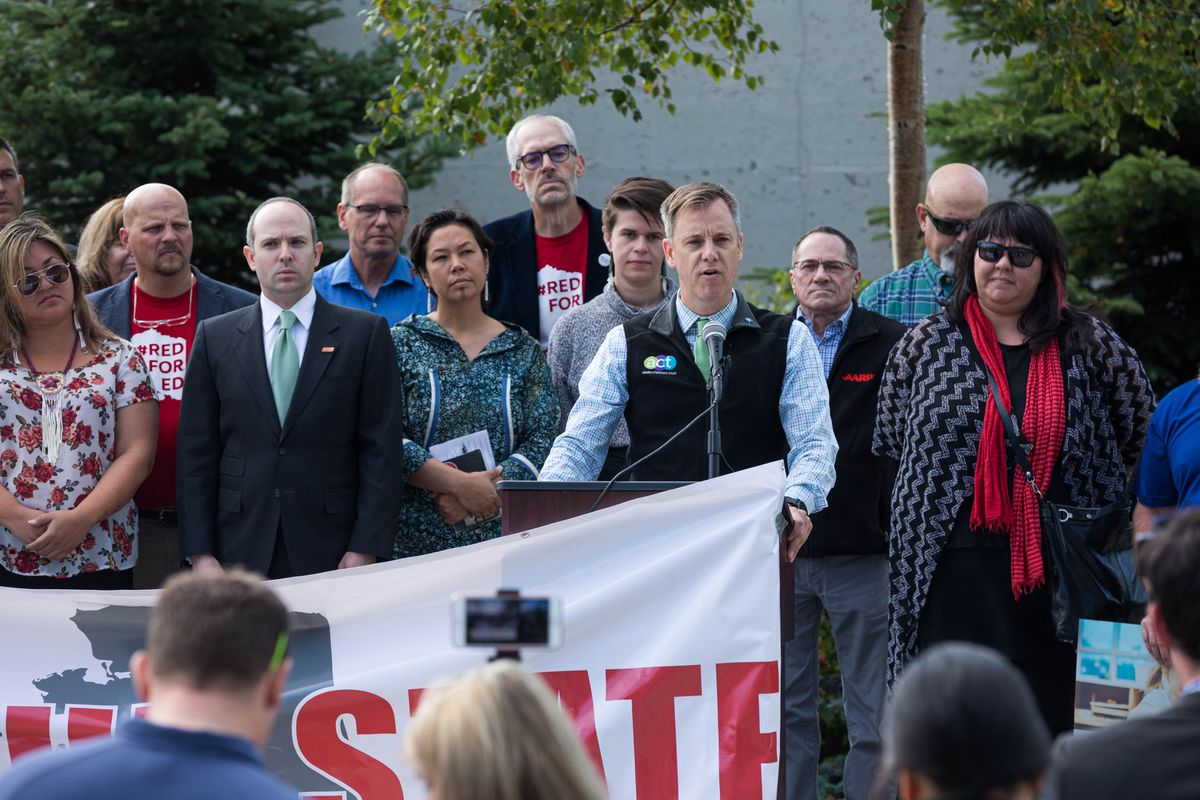 Trevor Storrs, president and CEO of Alaska Children's Trust, speaks at a Save Our State rally Wednesday, Aug. 7, 2019 outside the Atwood Building in Anchorage. Save Our State a coalition of groups advocating for the passage of a state operating budget without additional cuts. (Loren Holmes / ADN)

Trevor Storrs, president and CEO of Alaska Children's Trust, speaks at a Save Our State rally Wednesday, Aug. 7, 2019 outside the Atwood Building in Anchorage. Save Our State a coalition of groups advocating for the passage of a state operating budget without additional cuts. (Loren Holmes / ADN)

A coalition of more than two dozen social service, labor and community organizations held a rally outside the Atwood Building during Wednesday’s lunch hour in hopes of convincing Alaska Gov. Mike Dunleavy to reconsider his cuts to the state operating budget.

With the end of the Alaska Legislature’s second special session at midnight Wednesday morning, the state’s political eyes are now on the governor, who now controls the fate of two bills addressing the state’s four main fiscal issues. Senate Bill 2002, fixing the capital budget and reverse sweep, is expected to be signed this week. House Bill 2001, setting this year’s Permanent Fund dividend and reversing most of the governor’s budget vetoes, was sent to his desk Wednesday.

“We support the budget prepared by the Legislature, and we urge the governor to sign it,” said Ken Helander, AARP’s Alaska advocacy director and a member of the Save Our State coalition.

Helander was speaking about HB 2001, which if signed into law would reverse all but $23.29 million of more than $400 million in operating budget and mental health budget vetoes signed by the governor in June. Those vetoes came atop more than $100 million in budget reductions previously approved by the Alaska Legislature.

The initial estimate of the governor’s vetoes was $444 million, but according to a July 23 document from the Legislative Finance Division, the governor actually vetoed $420.7 million from the state’s operating and mental health budgets and withheld another $30 million in K-12 funding over objections about its constitutionality.

Wednesday’s rally, broadcast online, allowed charities affected by the cuts to explain why the governor should reconsider his vetoes.

“We project a 48% increase in homelessness,” said Michael Fredericks, board chair of Catholic Social Services. With cuts to state matching grants, she said, her organization has already had to cut its services.

“We almost did have to shut Brother Francis (homeless shelter) down,” she said.

An emergency declaration by the Municipality of Anchorage has released more funding, but that comes at a cost to local residents, she said.

“We respectfully ask, on behalf of those that we serve, that this funding is restored,” she said.

Others described how Head Start education programs statewide have been eliminated or reduced.

The vetoes upheld by the Legislature include $20 million from the University of Alaska (atop a $5 million cut previously approved by lawmakers), travel costs for state agencies, four state jobs that have been vacant for more than a year and funding for local emergency management.

“I don’t know that we can get to that 45, based on what’s been going on and the conversations that have been happening in the Legislature," said Vince Beltrami, head of the Alaska AFL-CIO and a member of the Save Our State coalition.

HB 2001 also includes a $1,600 Permanent Fund dividend, less than the $3,000 preferred by the governor and some legislators, and less than the $6,700 that was a Dunleavy election campaign goal.

The governor has until Aug. 30 to sign HB 2001, veto all or portions of it, or allow it to become law without his signature.

In an email Tuesday by press secretary Matt Shuckerow, the governor responded to a request from Speaker of the House Bryce Edgmon, I-Dillingham, and Senate President Cathy Giessel, R-Anchorage, that asked him to call the Legislature into a third special session to discuss changing the traditional formula for paying the Permanent Fund dividend.

Shuckerow wrote in his email, “Governor Dunleavy says he will not call the Legislature back into an immediate special session.”

In a letter dated Aug. 5 that was sent to Giessel and Edgmon, Dunleavy said, “At this time, I am weighing all options available for my administration to continue the dialogue and work with the legislature on these matters.”

Capital budget to be signed this week

Senate Bill 2002, containing money to fund the capital budget, passed the House and Senate last month. SB 2002 taps the state’s Constitutional Budget Reserve to pay for the $171 million capital budget. Lawmakers approved the capital budget earlier this year but failed to reach the supermajority needed to spend from the budget reserve. That meant the budget was unfunded, requiring SB 2002.

SB 2002 also contains the “reverse sweep,” which prevents 54 state savings accounts from being automatically drained by a clause of the state Constitution.

If that drain takes place, more than $115 million in programs within the state operating budget, including college scholarships and rural electrical subsidies, would go unfunded in the new fiscal year. Because the fiscal year began July 1, some of the effects have already been seen.

While Dunleavy previously said he will not veto the reverse sweep clause within SB 2002, Tuesday’s message reiterated a statement from July 29 that “he will exercise his line-item veto authority where necessary.”

After lawmakers approved an unfunded version of the capital budget earlier this year, the governor vetoed $10.8 million in line items. Those projects would be restored if SB 2002 is signed into law as is. SB 2002 also allows the Legislature to withdraw up to $250 million in additional cash from the Constitutional Budget Reserve for things such as wildfire fighting, earthquake recovery and Medicaid overages. That permission was not in the original capital budget.