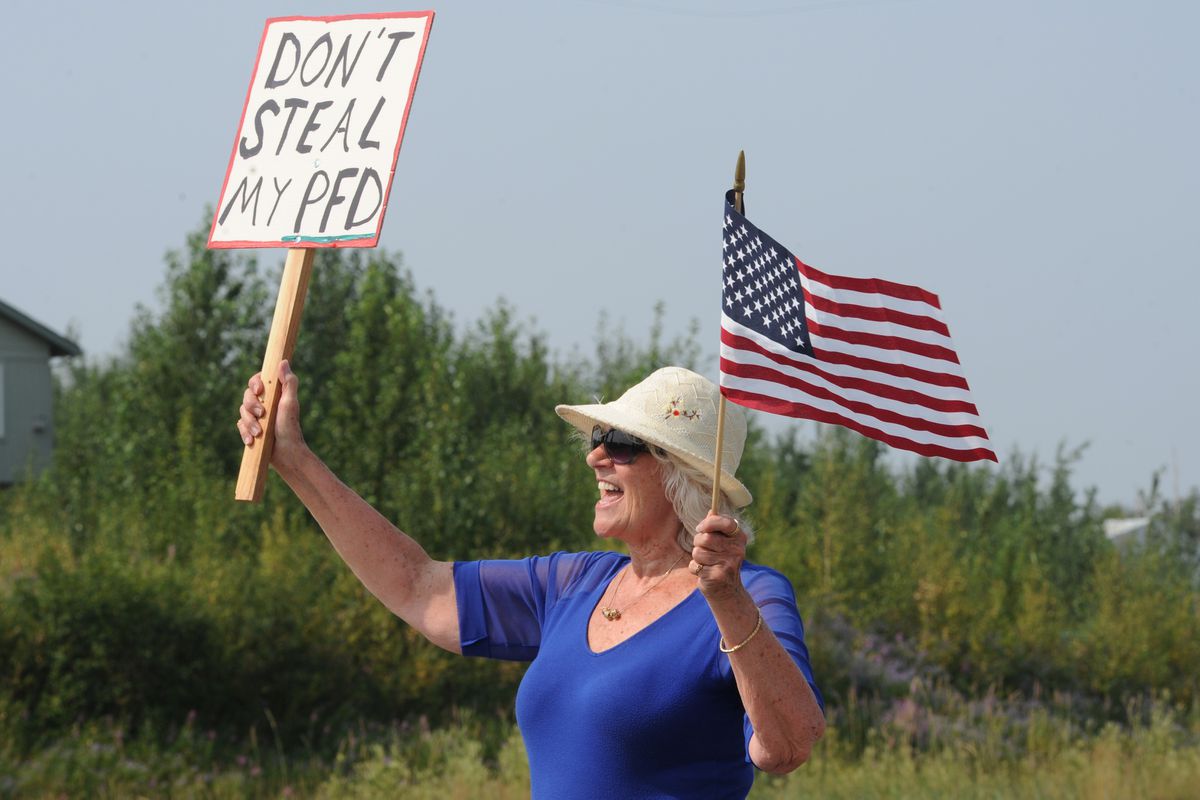 Kathy Hayes waves to motorists on the Parks Highway before the legislative special session at Wasilla Middle School on Monday, July 8, 2019. Hayes said she is "an old-time Alaskan and wants the legislature to listen to the people and let the people vote on any changes to the PFD." (Bill Roth / ADN)

Kathy Hayes waves to motorists on the Parks Highway before the legislative special session at Wasilla Middle School on Monday, July 8, 2019. Hayes said she is "an old-time Alaskan and wants the legislature to listen to the people and let the people vote on any changes to the PFD." (Bill Roth / ADN)

Bowing to political complications and deadlines, leaders of two groups fighting for a full Permanent Fund dividend are arguing that Alaska Gov. Mike Dunleavy should not veto the Legislature’s dividend payment of $1,600, though they call that only a partial payment of what Alaskans should receive.

They also say they’ll support Dunleavy in supporting full payments based on the traditional payout formula in state law — $3,000 this year — and an amendment to enshrine the full payment in the constitution.

The Permanent Fund Defenders, a group that includes two longtime Alaska political figures, said they’re asking the governor to view $1,600 as a “down payment" for now, according to a statement from that group released last week. They say he should keep fighting for the full amount.

“We request that the governor not veto the short-funded (Permanent Fund dividend) and continue his work to add more funds for the dividend according to law," said Clem Tillion, 94, chair of the Defenders group, and a former state Senate president who helped establish the fund in 1976.

The Legislature has sent a bill to Gov. Mike Dunleavy overriding many of his vetoes and setting a $1,600 dividend check for nearly every Alaskan. The governor has until Aug. 30 to sign the bill, veto all or parts of it, or allow it to become law without his signature.

But the governor cannot add to the dividend in House Bill 2001. And rejecting the $1,600 dividend would force a do-over for a Legislature that has already held two special sessions.

That could delay the annual payment made in early October and that many Alaskans count on for household needs, said Juanita Cassellius, a secretary and board member with Defenders.

“People need their PFD and they need it on time,” she said.

There’s also a risk that prolonging the fight could lead to no dividend this year, she said. Cassellius said the group wants to see the governor call another special session to address his goal of enshrining the dividend in the constitution.

“That’s the message we got, he’s continuing to fight for a full PFD,” Cassellius said. “He is using the veto sword until the last minute."

The governor on Monday could not immediately be reached for an interview on the topic.

A newer group, “Save the PFD," is based in the Matanuska-Susitna Borough, Dunleavy’s home and a center of his support.

Mark Fish, that group’s executive director, said Monday he believes it’s time for the governor to go with the $1,600 dividend, and to resume the fight for a constitutional amendment in the regular legislative session starting in January.

The full group, with about 25 core members, will meet soon to discuss that option, Fish said.

Fish said his group plans to raise money to support candidates in the next election who support a full dividend, said Fish.

Small businesses and many Alaskans count on a full PFD, he said.

“The PFD keeps many families afloat,” said Fish, former chair of the Alaska Libertarian Party. “It’s something that actually lifts families out of poverty."

The PFD Defenders include Rick Halford, 74 and also a former state Senate president. Tillion and Halford were friends and colleagues of the late Gov. Jay Hammond, often called the “Father of the Dividend.”

Halford, who became a lawmaker in the late 1970s and was part of the process to define the dividend payment program, said on Sunday that Hammond would have supported full PFD payments today.

“Hammond’s view was keep giving the dividends and if you have to claw some of it back in taxes (then do that),” Halford said.

Halford said Dunleavy’s unyielding stance on a $3,000 dividend has led the Legislature to boost the dividend from much lower amounts it had been considering.

Halford said a reduced dividend hurts Alaska’s poorest the most, because it takes the same amount from rich and poor, biting harder into smaller incomes.

“There is no solution worse than taking the dividend,” Halford said. “Only Alaskans pay the bills, and nonresidents pay nothing. It should be the last choice (for state revenue), not the first choice.”