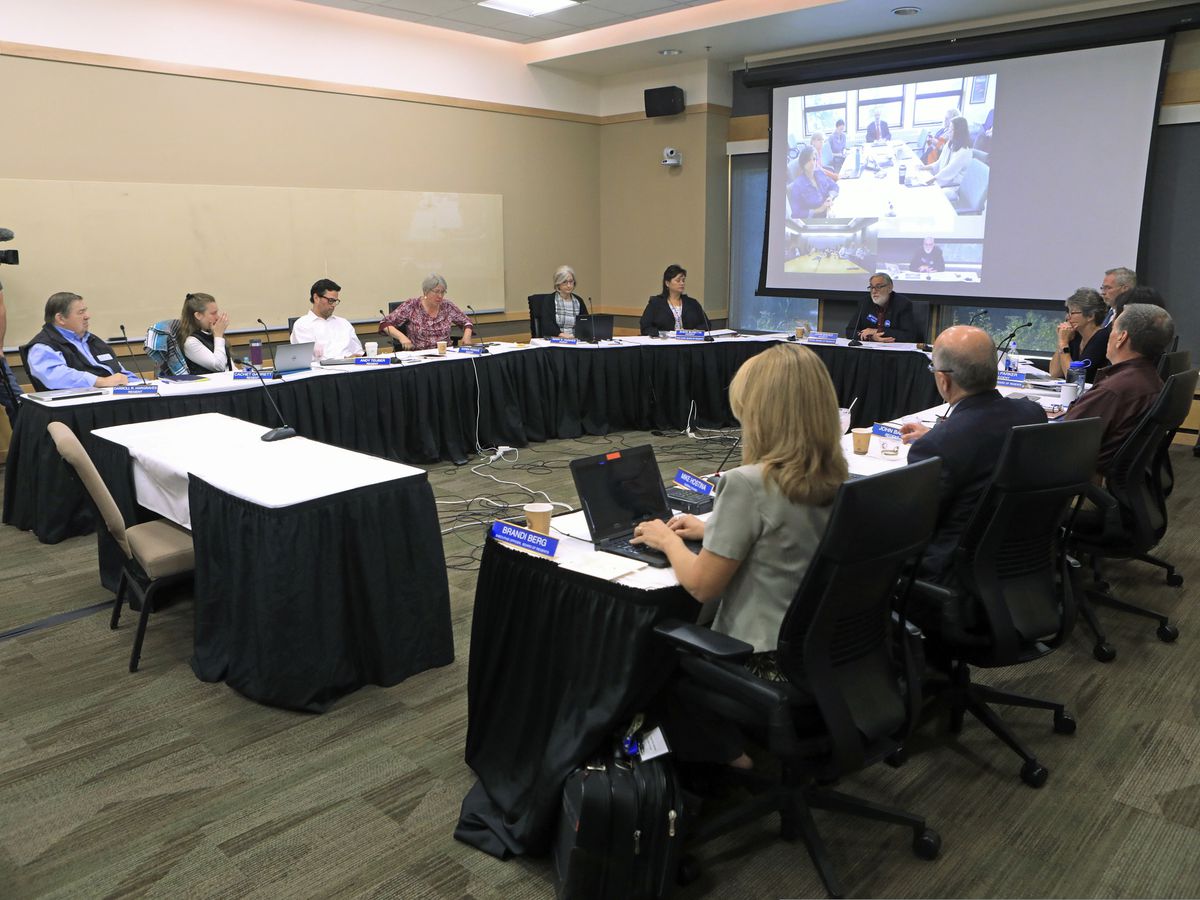 The University of Alaska Board of Regents held an emergency meeting in Anchorage on Monday, July 22, 2019. Regents voted 10-1 to declare a financial exigency, allowing administrators to expedite layoffs of tenured faculty in the face of severe budget issues. (AP Photo/Dan Joling)

The University of Alaska Board of Regents held an emergency meeting in Anchorage on Monday, July 22, 2019. Regents voted 10-1 to declare a financial exigency, allowing administrators to expedite layoffs of tenured faculty in the face of severe budget issues. (AP Photo/Dan Joling)

University of Alaska regents will meet Tuesday to consider canceling their declaration of financial exigency following the governor’s announcement that he’d agree to a $25 million state funding cut for the public university system this year instead of an unprecedented $135 million cut.

The two-hour emergency meeting is scheduled for 10 a.m. at the University of Alaska Fairbanks. There will also be video conference sites in Anchorage and Juneau, according to the university system.

This is the regents’ first major decision since last week’s funding announcement from Gov. Mike Dunleavy. It will, in part, dictate at what speed UA can eliminate jobs and academic programs.

Originally faced with a one-year, $135 million state funding cut, the UA Board of Regents on July 22 voted 10-1 to declare financial exigency, a rare step taken by universities, allowing them to more quickly downsize in the face of a financial crisis. Under financial exigency, for instance, UA has to provide tenured faculty with 60 days’ notice of a layoff instead of one year.

Faculty members say the declaration has led to feelings of increased instability and fear, and served a blow to UA’s reputation. Some have filed grievances objecting to the declaration, asking regents to rescind it.

Regents have said that if funding circumstances changed for UA, they could decide to modify or withdraw their declaration.

Last week, Gov. Mike Dunleavy reversed his funding decision for UA. He announced he would accept the Legislature’s proposed $25 million state funding cut for the university system this year. It’s a sharp shift from his June 28 veto of $130 million in funding for UA atop a $5 million cut approved by the Legislature.

[Gov. Dunleavy and a key University of Alaska leader signed a 3-year compact. What does it mean, and what happens now?]

This year’s funding amount is included in a controversial two-page document described as a three-year compact. It’s not legally binding, but both Dunleavy and UA Board of Regents chairman John Davies signed it and say they agree to its terms. The compact says Dunleavy will support another $45 million cut to state funding for UA spread over the next two years.

UA President Jim Johnsen is now recommending regents terminate their earlier declaration of financial exigency, according to a meeting document.

The meeting will be streamed live at alaska.edu/bor/live/.

Also, a regents subcommittee on UA’s structure is scheduled to meet in Fairbanks on Aug. 28 from 1 to 3 p.m. On Sept. 9 at 4 p.m., regents will have a statewide call for people who want to give public testimony. The full board will then meet Sept. 12-13 in Anchorage.