Alaska Gov. Mike Dunleavy has promised to roll back 100 ‘job killing’ regulations. He hasn’t revealed most of them. 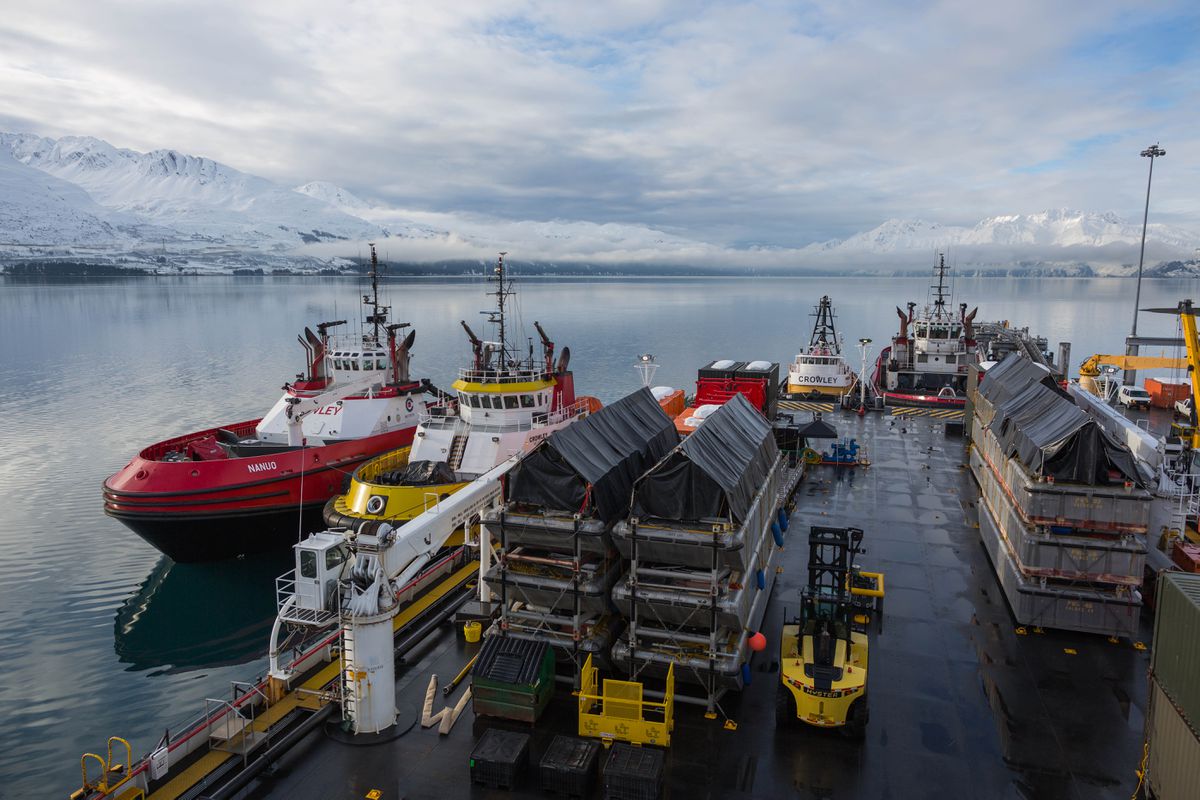 Tugboats are docked alongside a barge at the SERVS facility in Valdez on Feb. 15, 2016. The tugs escort oil tankers through Prince William Sound, and the barge supports nearshore oil spill recovery operations. (Loren Holmes / ADN)

Tugboats are docked alongside a barge at the SERVS facility in Valdez on Feb. 15, 2016. The tugs escort oil tankers through Prince William Sound, and the barge supports nearshore oil spill recovery operations. (Loren Holmes / ADN)

However, his administration has declined to name nearly all of them, making it impossible to determine how meaningful the changes might be.

The governor and members of his administration say the targeted rules, which have been identified since at least March, aren’t needed and that public protections won’t be watered down.

“The idea that there is some magic number of revisions that should be made, and it’s a big number, that’s very much like what (President Donald) Trump is doing,” said Lois Epstein with The Wilderness Society. “They’ll need to do their homework to justify to us why these changes are needed."

The most controversial idea announced so far could lead to changes in the oil-spill plan requirements that were strengthened after the 1989 Exxon Valdez oil spill. Advocacy groups are especially concerned about that item.

That was a first, she said.

If the changes decrease “time spent (and) money spent” by regulators and industry, and still protect the state, that’s a good thing, she said.

Cabinet members say the governor tapped them early on to identify costly, useless regulations. The administration has declined to name all but a dozen or so.

“A number are still in the deliberative process,” said Jason Brune, commissioner for the Alaska Department of Environmental Conservation.

Dunleavy touted his ‘Open for Business’ agenda last month during a series of interviews with national conservative media outlets to combat the recall campaign against him. The governor said bureaucracies can take on lives of their own, adding unnecessary restrictions that limit freedom and economic growth.

He labeled the regulations “job killing” — the exact words used by President Trump to describe his administration’s deregulatory agenda.

In a September video update, Dunleavy donned a hard hat to explain how his administration identified “over 100 regulations that we feel impede business and impede Alaskans ability to just carry on daily life.”

The idea is “to make things a little more streamlined and get government out of the hair of Alaskans,” the governor said.

The rollbacks won’t compromise public health and safety, he said.

“When you hear the words ‘open for business,’ that’s code for rolling back consumer and environmental protections,” said Bob Shavelson with Cook Inletkeeper, an advocacy group focused on protecting waters near Anchorage. “We have seen that across the country.”

Epstein with The Wilderness Society said the governor’s plans are reminiscent of Trump’s strategy. Trump in 2017 ordered two regulations be identified for elimination for each new one created.

Every governor enters office looking for ways to cut red tape, said Ed Fogels, former state Department of Natural Resources deputy commissioner under two previous governors and a partner in a consulting firm with clients in mining and other industries.

“As some point you’ve got to clear the decks to some extent, condense regulations, get them into workable packages,” said Fogels.

One hundred is a big number, he said. Still, Fogels said, it’s difficult to determine how aggressive the proposed changes are without knowing what they are.

According to Brune, the conservation department has identified nearly 50 of the regulations slated for elimination or reform.

He said a few minor ones have been finalized, following public input, such as slightly reducing fees companies pay for underground storage tanks.

Some ideas might be dropped. Others will be rolled out for public comment one or two at a time.

“We have three more years to get 'er done, or more," Brune said.

For the oil spill plan requirements, Brune said DEC is in “listening” mode. A second public comment period will be held if specific changes are proposed.

“We’re not trying to gut the regulations,” he said.

[Alaska is considering whether to change oil spill plan requirements]

This open-ended approach of putting all the requirements on the table for discussion is cause for concern, she said, a signal the administration has big changes in mind.

“We see this as one of the biggest threats to the system put in place after the Exxon Valdez oil spill,” Schantz said. “It’s really challenging for the public to provide meaningful input into this process that’s so broad, without having any indication what DEC has identified as a problem."

Other agencies have announced minor changes.

The Alaska Oil and Gas Conservation Commission, which regulates oil wells, proposed seven changes to “outdated, unnecessary or overly burdensome" rules, according to new Commissioner Jeremy Price, Dunleavy’s former deputy chief of staff. A December hearing is set to repeal them, he said.

Those regulations are simple “cleanup" items, said Cathy Foerster, the former longtime commissioner who helped identify them before retiring this year. One addresses reserve pits where oil companies once put drilling waste. The pits are no longer used, she said.

“It’d be like a law that was still on the books telling someone how to tie your horse to the fence post outside the legislative building,” she said.

Corri Feige, commissioner of the Alaska Department of Natural Resources, said her agency has identified about 80 regulations for reform. She said she’s unsure which ones made the governor’s list.

The department is focused on updating regulations and smoothing out application procedures, such as for land-use permits, she said.

Feige declined to name the regulations but offered an example. DNR is in the process of revising rules to allow more than one business to apply to operate commercial skiing operations, by helicopter or snowcat, near Girdwood in the Glacier/Winner Creek Special Use Area.

“We’re trying to remove impediments to the private sector, and drive business,” she said.

Correction: Ed Fogels is a former deputy commissioner for the state Department of Natural Resources, not the Department Environmental Conservation as an earlier version of this story incorrectly stated.