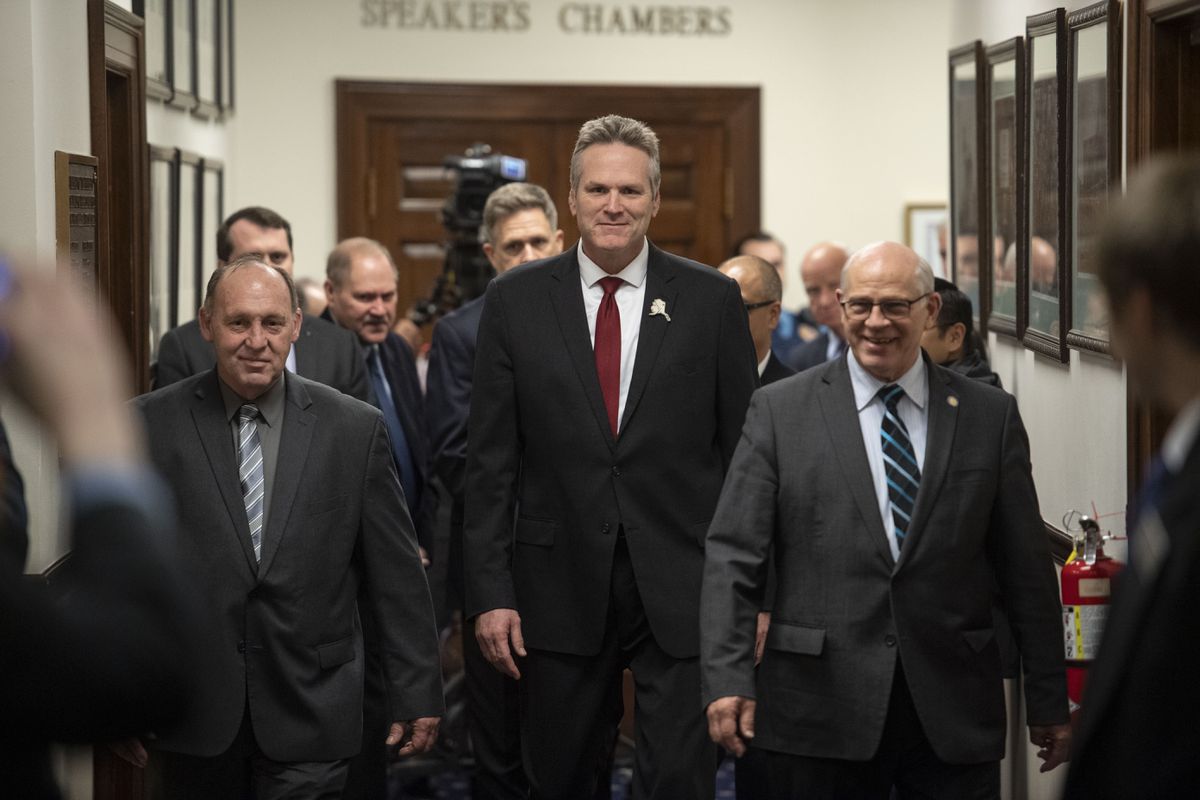 JUNEAU — Alaska Republican Gov. Mike Dunleavy, facing a recall threat fueled during his stormy first year in office, said the state is running out of time to fix its long-running budget deficit.

In a speech to lawmakers Monday, he called for creation of a statewide lottery and doubled-down on proposed constitutional changes that got little traction last year amid angry outcry over budget cuts he'd proposed.

Dunleavy said in his second State of the State speech that a focus on cuts last year “took all of the oxygen out of the room.” He said he shied away from deep cuts in his spending proposal for the upcoming budget year to allow more room for discussion of a long-term plan, including the future of the checks paid to residents from the state's oil-wealth fund, the Alaska Permanent Fund. He has insisted on paying a dividend check in line with a longstanding formula last followed in 2015 and that many lawmakers say is unsustainable.

He argued for constitutional changes that would address a spending cap and give Alaskans a say on changes to the Permanent Fund dividend and taxes, ideas he pitched last year. “We must give the people an opportunity to weigh in on items that impact their lives directly,” Dunleavy said.

“It’s the people who placed us here. It’s the people we serve; we work for them,” he said. “And it’s the people that we must bring into this grand discussion regarding Alaska's future. To ignore them, we do so at our own peril, for they have the power of the ballot box.”

House Speaker Bryce Edgmon, an independent from Dillingham, said there was not support last year for the proposed constitutional changes.

Dunleavy did not mention the recall effort, the first serious effort to remove an Alaska governor from office since the early 1990s. A state court judge earlier this month decided the effort aimed at recalling Dunleavy could proceed to a second signature-gathering phase, though the decision is expected to be appealed. Anger over cuts he proposed last year fueled the push.

Dunleavy said he recognized the angst caused by “pulling back the reins on spending" and said he didn't run for governor “to hurt the state that I love.” But he said the state's fiscal issue needs to be addressed.

Dunleavy said he will introduce legislation creating a statewide lottery, saying it's “past time for Alaskans and visitors to have the option to individually contribute to fixing Alaska’s fiscal issue.” Alaska has no statewide sales or personal income taxes, though some lawmakers have expressed interest in proposals to raise motor fuel taxes or levy a $30 annual tax on people employed in Alaska.

Dunleavy said also he will propose establishing a state inspector general to investigate “careless and fraudulent spending” across programs and services.

House Majority Leader Steve Thompson, a Fairbanks Republican, said his office has been working on the lottery idea. He said the proposal would not “bring a ton of money but every little bit of money helps.” Thompson said he'd hoped Dunleavy would have more revenue ideas.

“We need to earn the people's trust that we have a good budget,” she said.

On education, Dunleavy said a working group would look at ways to retain and recruit teachers. Alaska has struggled to retain teachers, particularly in rural areas.

Work also must continue to address crime, including taking steps to reduce recidivism, Dunleavy said, adding that he looks forward to hearing lawmakers' ideas on this.

In his speech last year, Dunleavy said spending must equal revenue and that the state can't “go on forever” using savings to plug the gap. Lawmakers have spent billions drawing down savings as they've struggled to address the deficit, with one of those savings accounts, the constitutional budget reserve, down to about $2.2 billion at the end of 2019, according to the Department of Revenue.

Dunleavy, in his budget plan for the upcoming fiscal year, which avoids the level of cuts he proposed last year, would use $1.5 billion from that reserve, a draw amount some lawmakers say is unacceptably high. His budget proposal includes a dividend under the traditional formula.

This story has been corrected to show the $16.3 billion was between two reserve funds.