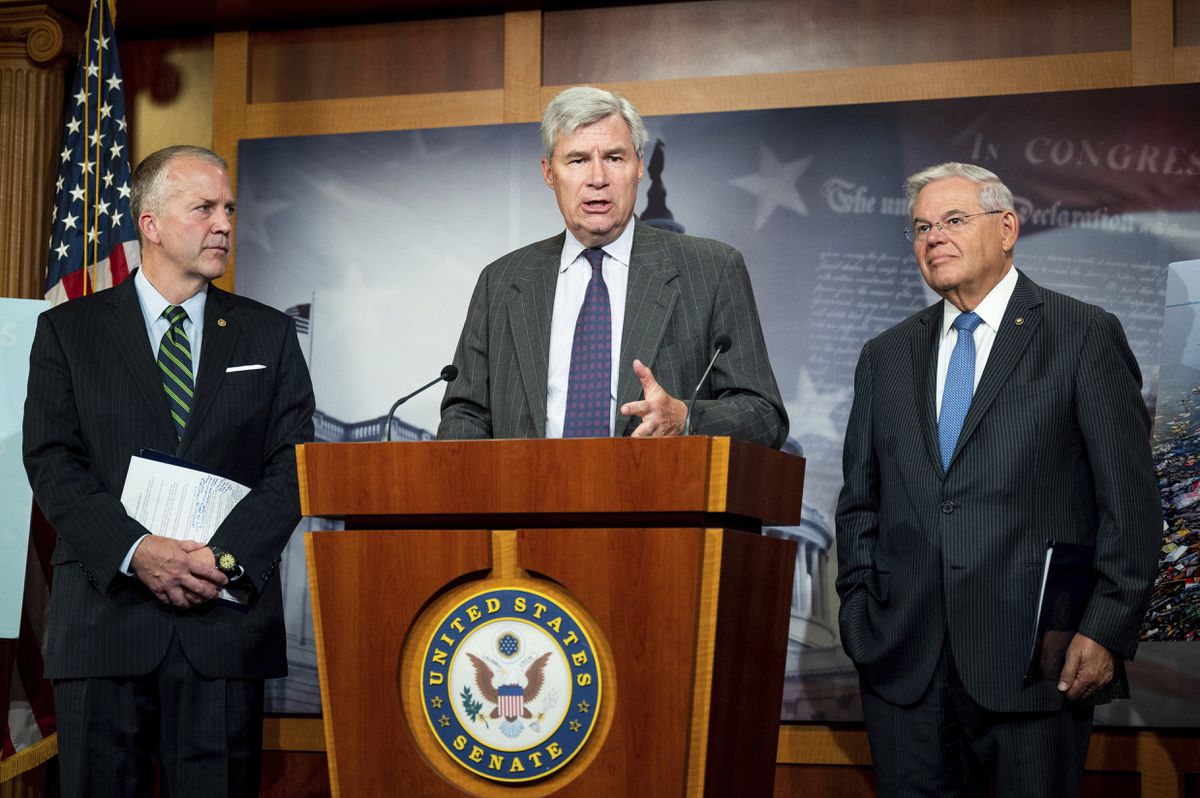 U.S. Sens. Dan Sullivan (R-AK), left, Sheldon Whitehouse (D-RI), center, and Bob Menendez (D-NJ) speak at a press conference to advocate for the Save Our Seas 2.0 Act at the Capitol in Washington on June 26, 2019. (Photo by Michael Brochstein/Sipa USA)(Sipa via AP Images)

U.S. Sens. Dan Sullivan (R-AK), left, Sheldon Whitehouse (D-RI), center, and Bob Menendez (D-NJ) speak at a press conference to advocate for the Save Our Seas 2.0 Act at the Capitol in Washington on June 26, 2019. (Photo by Michael Brochstein/Sipa USA)(Sipa via AP Images)

An unlikely friendship between a climate change champion from the East Coast and Alaska’s junior U.S. senator paved the way for a bipartisan effort in Congress to begin ridding the ocean of plastic debris.

Sen. Sheldon Whitehouse, a Democrat from Rhode Island known for his weekly speeches on climate change and attacks on the oil industry, has found a piece of common ground with Sen. Dan Sullivan, a Republican lawmaker and full-throated supporter of drilling in the Arctic National Wildlife Refuge.

Political differences didn’t stop the two from teaming up to pass an ocean debris cleanup bill in 2018.

Now they’re back for Act 2.

In January, the Senate unanimously passed the Save Our Seas 2.0 Act, introduced last year by Sullivan and Whitehouse along with Sen. Bob Menendez, D-NJ.

If it passes the House and becomes law, the measure will boost the federal government’s efforts to work with other countries to halt ocean waste, among other steps.

Sullivan called the new act the “most comprehensive marine debris legislation ever to pass the U.S. Senate."

Sullivan, 55, said his “odd-couple” friendship with Whitehouse, 64, was a “driving force” behind the bills.

Chris Pallister with Gulf of Alaska Keeper in Anchorage, a group working to clean up Alaska coastlines, called the Save Our Seas acts a “major step in the right direction."

Pallister said it’s gratifying to see a Republican and Democrat working together, especially with so much hostility between the parties.

Sullivan and Whitehouse got to know each other while serving on a Senate Environment and Public Works subcommittee. They sometimes get together for dinner with their wives, Julie Fate Sullivan and Sandra Thornton Whitehouse.

Ocean waste is a frequent topic. But the senators veer into “courteous conversations” about their different takes on climate change, Whitehouse said.

He’s politely trying to convince Sullivan to take up climate change as a cause they can work on together, through future legislation.

A study in contrasts

Whitehouse supports carbon pricing — making the oil industry, utilities and other emitters pay a fee based on the amount of planet-warming gases they produce. The Democrat has also cosponsored legislation to stop drilling in the Arctic refuge.

Sullivan helped secure drilling in the refuge in the 2017 Tax Cut and Jobs Act.

[From 2017: ‘A historic moment’: How ANWR drilling was passed by Congress after decades of effort]

The oil and gas industry has been one of Sullivan’s leading donors, according to OpenSecrets.org, a nonprofit that discloses campaign contributions.

Sullivan does not get the same support from environmentalists. The League of Conservation Voters, an environmental advocacy group that tracks lawmakers’ voting records, gives Sullivan a lifetime score of 7 percent.

The group has granted Whitehouse a lifetime score of 98 percent — and is also one of the Rhode Island senator’s biggest political donors, according to OpenSecrets.

Both senators are known for their weekly speeches on the Senate floor. Whitehouse issues dire warnings about climate change in his “Time to Wake Up’” series that started in 2012. Delivering more than 250 speeches, he’s asserted that the oil industry’s dark-money contributions have kept alive anti-climate views and stalled political action on the issue.

Sullivan, meanwhile, is known for his “Alaskan of the Week” speeches. The Alaska senator jokingly asserted that his speeches are “a hell of a lot more interesting.”

Sullivan is up for reelection this year. He faces a challenge from Al Gross, an independent candidate, fisherman and orthopedic surgeon who received the endorsement of the Alaska Democratic Party. Gross is not taking corporate PAC donations, said his campaign manager, David Keith.

Sullivan acknowledges climate change is an issue in Alaska. But he said he supports using a combination of technology and innovation to deal with it, and relying on existing resources including natural gas, a fossil fuel.

“(Whitehouse) and I talk about (climate change) a lot,” Sullivan said. “With him, I‘m always open ears and respectful.”

“There’s other stuff we can do on the environment (together),” Sullivan said, without being specific.

When the senators passed their first Save Our Seas Act in 2018 — renewing a federal marine debris program, among other things — Sullivan made sure Whitehouse got an invitation to the bill signing by President Donald Trump.

Whitehouse, like most in his party, is a Trump critic. He once called the administration a “gong show with a nuclear button.”

Sullivan said he told him: “ ‘Look man, I’m trying to get you into this Oval Office signing ceremony, but I know you’re not the biggest fan of the president. So I got to ask you, are you going to behave in the Oval Office with Trump?’ "

All went well. Trump said he respects Whitehouse, and made light of their political differences.

“See, we can shake hands,” Trump said, thanking Whitehouse for his work, according to a White House transcript.

Whitehouse in January voted in favor of both articles of impeachment against the president. Sullivan voted “not guilty” on both.

In recent months, the two senators “tag-teamed" to win full Senate support for the new act from their respective sides of the aisle, Sullivan said. They pitched it to the Washington Post editorial board, prompting a favorable opinion piece, and touted the importance of a $1.5 billion pledge from industry to fight plastic waste, Sullivan said.

In speeches on the Senate floor in January, before celebrating with a drink in the Senate lounge, the senators singled each other out for praise.

“There are a lot of administration officials who probably had to hold the phone an inch or so away from their ears because Sen. Sullivan was trying to get their attention on this subject," Whitehouse said.

They’re already scheming on Save Our Seas 3.0.

“We are not done here,” Whitehouse said.