As budget debates begin in earnest, Alaska’s Legislature and governor are struggling to make cuts. And there’s little talk of new revenue. 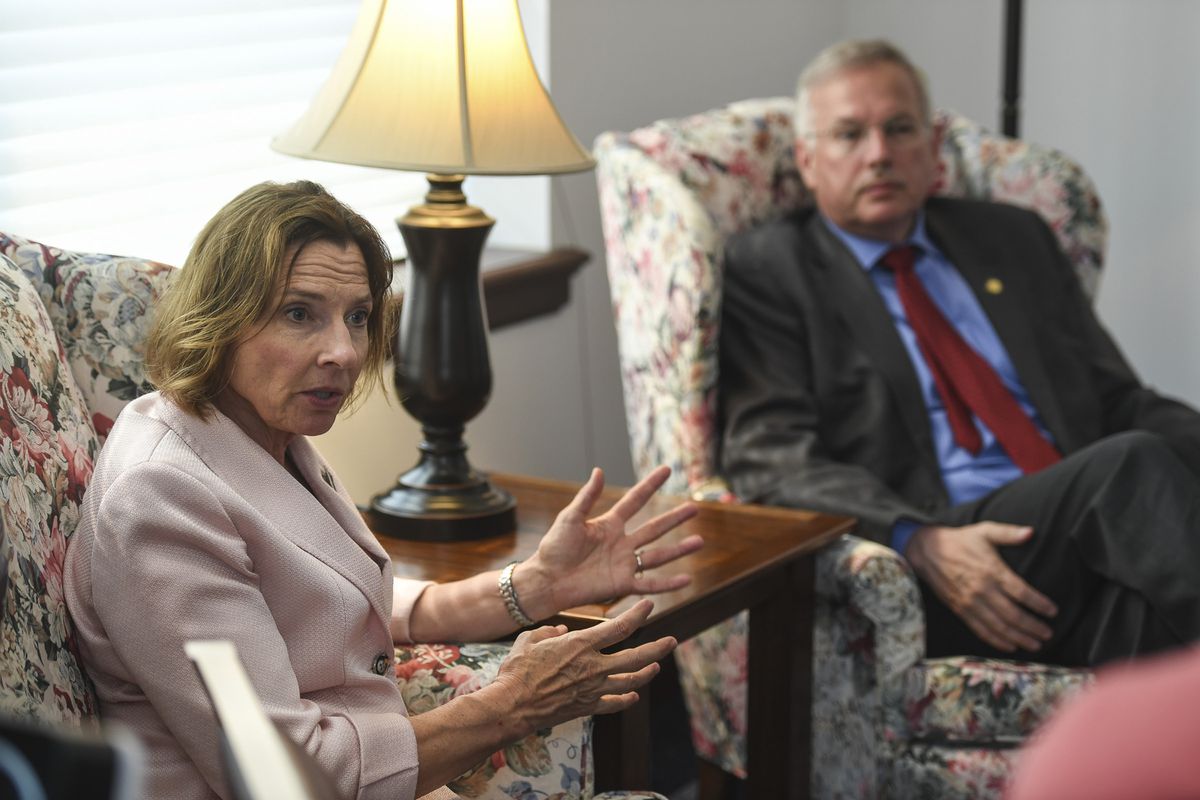 FILE - In this July 8, 2019, file photo, Senate President Cathy Giessel, R-Anchorage, left, and Speaker of the House Bryce Edgmon, I-Dillingham, speak to members of the media after gaveling in to a Second Special Session of the Alaska Legislature in Juneau. (Michael Penn/Juneau Empire via AP, File)

FILE - In this July 8, 2019, file photo, Senate President Cathy Giessel, R-Anchorage, left, and Speaker of the House Bryce Edgmon, I-Dillingham, speak to members of the media after gaveling in to a Second Special Session of the Alaska Legislature in Juneau. (Michael Penn/Juneau Empire via AP, File)

JUNEAU — A year after vowing to fix Alaska’s budget with sweeping cuts, Gov. Mike Dunleavy is having problems following through.

Neither the governor nor the Legislature have proposed significant spending cuts, and neither is pursuing major tax increases that could be used to pay for the traditional Permanent Fund dividend that the governor continues to support.

This week, the Alaska House of Representatives will begin debate on a $4.45 billion state budget not significantly different from a plan introduced by the governor in February.

That figure is slightly less than the state is expected to spend in the current fiscal year, but it’s a far cry from the governor’s 2018 pledge to “introduce significantly lower budgets, and use my veto pen to control spending."

After cutting the tax-funded and investment-funded share of the budget by 31% between 2014 and 2020, legislators and the governor are now struggling to make even incremental reductions to state spending.

Budget vetoes inflamed a recall campaign against the governor, whose one-year plan morphed into a two-year plan that now appears to be abandoned. A majority of legislators say the recall has starved the governor and Legislature of the political will to cut services.

“The recall has changed the political dynamics around the state. I think there’s no question about that,” said House Speaker Bryce Edgmon, I-Dillingham.

Contractual obligations and federal requirements have blocked other cuts.

“If it were possible to make dramatic reductions in the budget, Gov. Dunleavy would have been able to do that this past year,” said Senate President Cathy Giessel, R-Anchorage.

The last state budget under former Gov. Bill Walker was $4.64 billion. Dunleavy’s first budget (including $299 million in supplemental spending), will end up near $4.49 billion, close to the second-year plan under consideration this week. If this summer’s wildfire season is as bad as last year’s, the second-year plan may grow larger still.

Dunleavy’s striking reversal on the budget has prompted observers to assume that it is being driven by the recall.

The governor himself has refused to answer questions. On Friday, a spokesman again declined to directly answer whether the governor’s change is driven by the recall. Instead, deputy communications director Jeff Turner said the governor wants legislators to take the lead.

“Governor Dunleavy’s proposed FY21 budget reflects his belief that following the significant spending reductions made last year, it’s time to focus on the other pieces of a sustainable and affordable budget plan,” Turner said in an email.

“He has asked lawmakers to share with him their ideas on how we reach a balanced budget plan, which could include spending reductions," Turner said.

After canceling two prior town hall meetings in Southeast Alaska, the governor will hold an event Tuesday in Chugiak.

The state is expected to have $5.1 billion in available revenue, enough to cover the cost of services, but the governor reconfirmed this spring that he supports a dividend paid using the traditional 1982 formula in law, something that would cost another $2 billion.

If the Legislature took up the idea, it would create a deficit of $1.5 billion. Covering that deficit would require either draining the state’s Constitutional Budget Reserve or violating a cap on spending from the Alaska Permanent Fund’s earnings reserve.

Edgmon said the latter choice is not an option.

“I think there will not be an overdraw from the earnings reserve. That’s off the table,” he said.

Lawmakers are only slightly less eager to use the Constitutional Budget Reserve, and several have said the maximum amount of a dividend this year will be $1,600 — and possibly below $1,000.

“In regards to paying a full statutory PFD, if any lawmaker thinks we should not follow law and pay a reduced dividend, they should consider sponsoring legislation to reformulate it,” Turner said.

No appetite for meaningful taxes, but ballot measure awaits

In the last week of February, many lawmakers had harsh words for a ballot measure that seeks to raise the state’s oil taxes. Backers of the measure say it could raise more than $1 billion per year for dividends or state services.

No other major tax proposal is garnering attention in the Legislature, though small measures are advancing. On Monday, the Senate is scheduled to vote on a higher gas tax, something expected to raise about $30 million per year. Sen. Click Bishop, R-Fairbanks, proposed the gas tax increase and has proposed a small school tax. The governor and Rep. Steve Thompson, R-Fairbanks, have proposed a state lottery as a way to raise money.

“We do have to look at other revenue options on the table as well," said Sen. David Wilson, R-Wasilla, speaking about the gas tax and a school tax.

Projected revenue from both taxes would cover less than 10% of a proposed full-dividend deficit.

There also isn’t a way to cut enough from state operations to close the gap created by a traditional dividend. The state would have to eliminate 18 entire departments, most required by law, to balance the books.

Even small cuts are difficult

Even taking small steps is difficult. On Thursday, Rep. Ben Carpenter, R-Nikiski, attempted to convince the House Finance Committee to cut state employees’ salaries across the board by 2%.

Carpenter was subsequently told by Dunleavy administration officials that doing so would violate union contracts.

“This highlights the challenge, the problem we have,” Carpenter said.

The leaders of the coalition that runs the House majority said they have heard overwhelmingly from constituents who want a smaller dividend if it means services are preserved.

“I absolutely have. That’s the loudest message I hear in my district,” said Rep. Chuck Kopp, R-Anchorage.

Rep. Neal Foster, D-Nome, represents the House district with Alaska’s highest unemployment rate and lowest median household income. While its residents would proportionally benefit more from a larger dividend than the residents of any other House district, he says they’re not interested if the alternative is budget cuts that mean service cuts.

“I would say 10 to 1, from both emails and people I’ve spoken with, I’m hearing folks want services,” he said.